Marking up a hex-grid game board.

In the wake of last week's HEXBLITZ game without hexes, I thought it might not be a bad idea to mark up one of my available playing surfaces to a hex grid.  This was a piece of 5-ply wood building material that had been left over years ago from earthquake repairs to the house and never collected. This piece is 120cm x 133cm. 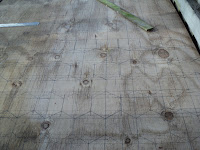 To mark this up I followed the method I outlined in a blog posting in March this year, but with the hexes 10cm across the faces.  I didn't bother sanding or otherwise tidying up the piece (though the other face has been) preferring to retain the grain, knots and assorted dings and scratches to give character to the surface.  I will at some time spray or brush on some green and beige so that it looks a little less like wood.

Time taken to mark up in pencil and mark with marker pen (which, surprisingly, survived the ordeal), a little over 24 hours elapsed time, probably less than three actually working on it.  It briefly considered marking the points of the grid with 'Y' marks, but gave that away as insufficiently clear.  Painting the hex sides also looked to be far too slow.

Finally, I have left the end hexes as pentagons, originally thinking that the hexes wouldn't quite fit. This seemed to be indicated by some experiments I did with a hex field on paper.  But fit they would, quite well, so I may well finish the edges as hexagons after all.  Overall, this gives me a field of 173 cells - 11-12 x 15.  Gridded up as squares, this would have given me just 156 10cm square cells - 12x13.


The following pix are there to see what the thing will look like 'in action'.  Have to admit, I might have been a tad overenthusiastic with the pencil.  Losing the pencil marks might not be as easy as I imagined.
This morning I splodged some heavily watered down paint to give the surface a bit of variety.  Can't say this is the prettiest game board I've ever seen, and I may end up giving it a proper sand and paint job - undercoat, remark the hexes, top coats, the lot.


The remaining pictures are merely an indulgence...

... just to see how it would look with terrain pieces added.


Meanwhile, I have indicated I would 'debrief' on the recent East Front action.  I kinda got a little sidetracked with this hex-board project.  Such reflections I'll leave for the moment.  Just by the way I have put in an order for a copy of Megablitz, the ETA of which, my spies tell me, is any time from this coming Friday to tomorrow week (Wednesday).

Posted by Archduke Piccolo at 2:59 PM