As Operation Bagration opened on the morning of 22 June 1944 a its tremendous artillery barrage, and massive assaults went in all along the front of Army Group Centre, the Red Army made considerable progress on the 1st and 2nd Byelorussian Fronts.  The 3rd Byelorussian Front found the Axis resistance rather stiffer, and a breakthrough elusive.  The exception was the small 27th Army of General Yu R Dubienko.  Striking a particularly weak part of the line, 27th army burst through on a narrow front before the morning was out.  According to instructions, they raced northwards with the Minsk highway the ultimate objective.

Axis responses were swift. Counter-attacks by local reserves sealed the breach, and held until nightfall against all further attempts to break through, and all through the following day. Twenty-seventh Army was stranded behind enemy lines.  In response to General Dubienko's radio call, Marshal Rokossovski was unequivoval.

"Push on to Skavinski Station," he said, "That place is a road and rail junction that will be useful to the Hitlerites, as will be the nearby airfield."
"Ammunition, fuel and provender?" the General's query was succinct.
"We will, if necessary, supply you from the air,"  Rokossovski's confident manner was all the reassurance General Dubienko needed.

This was the basis of an East Front game 'Jacko' and I played last Tuesday evening. We had been exploring operation level games, and have been rather attracted by the army level version of Chris Kemp's Not Quite Mechanised game system. I had been in the process of putting together a formalised rule set based upon Mr Kemp's 'Umpire's Guidelines' that I had downloaded. Now the game on Tuesday might have ended up a rather scratchy affair, but for the generosity of Bob Cordery, who sent me, among other useful downloadable files, a rule set he had devised some years ago: HEXBLITZ.

This was just the thing: the same ground and time scales that I had in mind (1:25000, 1 turn to 2- 2.5 hours) and very similar figure and vehicle scales as well  (1 stand to 1 battalion, roughly).  On Monday night I whipped together some playing aids, most of which I didn't use owing to their fiddliness. Some aspects of the game system therefore got a bit fudged, but that was more due to time constraints than anything. I did use the 'stance' counters, though, and the card system for move order, by formation, at least. 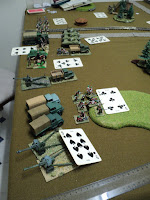 The action was loosely based on one of the One Hour Wargames scenarios:
"Disorganised Defence".  In the basic scenario The attackers get 4 units, the defenders get 3 on table, and 3 reinforcements late in the day.

"Hold on for as long as you can," Busch ordered, "with luck, we'll have Panzers with infantry and artillery support with you by the end of the day."

To block the Soviet advance, General Dumitriescu (Jacko) placed 4th Infantry Division in and around the town of Bogacharovo (see Map), 6th Division around State Farm 570. and held the rest of his command in the vital town of Skavinski itself. These troops were all he had to hold out for the 14 hours until reinforcements could be expected.
The Soviet plan, hastily scratched out by General Dubienko (Self, using an anachronistic ball pen and lined paper, a valuable document long since lost to history. The above map is based on that original). The main early thrust would be made by 488th Rifle Division against Bogacharovo, assisted by 94th Cavalry sweeping between that town and Skavinski to approach from the northwest. Support would be provided by 60th Heavy Artillery Division and the Army's organic field artillery.
For its part, 375th Rifle Division was to attack State Farm 570. Unsupported as it was, I had no great hopes of success, of course. But if it tied down one of the enemy formations, that was sufficient.  Finally the Tank Corps was to push ahead behind the cavalry and strike into the southeast corner of the main Army Objective: Skavinski Station and its associated airfield.


This game was very much a learning process for both of us. Fortunately the game example Bob send me helped point the way, though we did get things wrong to start with (which cost the Soviets more than the Axis, but them's the breaks). The Logistics elements we didn't trouble with, mainly concentrating of movement and combat. I'd very much like to do this scenario again some time, with the Soviets reliant on what they have already, and what they might capture.  Ammunition might be a consideration, too. After a couple of moves we hit on the idea that multiple attacks upon a single objective can each call upon artillery support. At first we counted artillery support as a separate attack, but that really didn't seem to work.
The battle of Bogacharovo was the main testing ground for the combat mechanics, with 488 Rifle Division attacking from the south, 94th Cavalry Division from the northwest, and heavy artillery support from the southwest. It all proved costly to the Soviets. However, reduced to SP=0, 6th Romanian Division fell back out of the town, to be destroyed in the open as 488th Rifle Division, followed them up. The cavalry attack reduced the Romanians to 0 SP, with 488th yet to move. Thus able to move and attack, the Russian infantry finished off the Romanian Division.
Now, in all this we did find ourselves fudging the move order a little. The one playing aid we did use, was the order/stance system: 'D = in defence', 'S = stationary' and 'M = moving'. 'Moving' could mean 'changing position' or marching or 'attacking'.  Now 'S' is a transitional stance between 'D' (or 'dug in') and 'M' (or attacking). One tended to wonder what stance distant supporting artillery should be - if indeed it needed to be in any particular stance at all to offer support fire. And how did move order affect support.  I think I know the answer to this - or at least an answer. 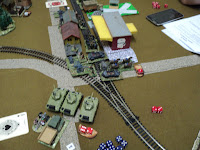 Having said that, I was most impressed with the simple elegance of the system. One is tempted to add 'A = Attack' and 'Sp = Support' to the existing 3 stances, more for clarity than to add anything to the system. Otherwise 'S' might be expanded to mean 'support' as well as 'stationary'. But I'll need to peruse the rule set more thoroughly and play a few more battles to be persuaded that a change is really needed.
Shortly after the defeat of Romanian 4th Division, XXXIV Tank Corps came up against the III Corps HQ troops in the south east corner of Skavinski. Whilst the Corps' infantry brigade attacked up the road from the south, the Sherman tanks from the tank brigades moved in from the southeast. Probably here is where we departed most significantly from Bob Cordery's game system. 'Per book', each element is given strength points (SP), the plinth displaying the number being integral to the stand or model. With neither time nor materials to create these (nor, I confess, the inclination) I tended to give SP markers by formation, rather than by element. Together with the XXXIV organic artillery (infantry guns), the tanks totalled 11 SP, which, with the support of the heavy guns (the field artillery had to move up into range) gave the tanks 15 SP in the attack. Add in the infantry, also supported, a further 8 SP. As the infantry brigade was not in contact with the rest of their parant formation (XXXIV Corps), that attack was carried out separately.
I don't recall for certain how many SP the defenders could conjure up in response - 8 or 10. Suffice to say the fighting on the edge of town got pretty bloody. The excitement mounted when 'Group Troianescu lurched into motion and counter-attacked the left flank of the Soviet assault. The Corps' infantry brigade was flung back (SP reduced to 0) exposing the tanks. Nevertheless, Dubienko ordered XXXIV Corps to continue its assault.
... 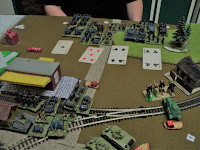 By this time, the sun not far from its setting, that Axis reinforcements arrived. And look at the priority cards fate chose to allocate them, by Jupiter! The Soviet cavalry, by this time, had severed the railway line east of Skavinsky, but they were to be afforded no time to dig in. All the same, at about sunset, XXXIV Corps successfully drove the Romanians from Skavinski. In the gathering darkness, Group Troianescu, following up their success against the infantry, struck the tank group. Both sides took heavy casualties in the fighting, but, exhausted, the Russians also fell back.


Their SP reduced to 0, the tanks fell back at once, but, the move order indicating it could still move, when it came to their turn, I pulled them further back, well beyond visibility range in the gloaming.

There ended the battle, as the tired remains of 27th Army drew back a few kilometers during the night.  Casualties had been heavy on both sides: 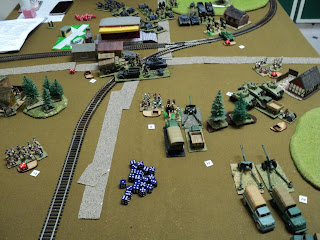 We both enjoyed this action, liked the way the game system was easy to pick up, and were pretty happy with the look of the thing.  Some aspects of the game mechanics I will discuss further in a 'debriefing' article, especially where I departed from Bob Cordery's system in terms of allocating and use of the Strength Point system and movement order cards.  This game was also an experiment to see if the game could be adapted to an 'open board' rather than a hex grid.

To be ... continued.  In a manner of speaking.
Posted by Archduke Piccolo at 3:58 PM