A recent posting on another's blog spot featured a very simple naval rules for 20th Century battleship action, together with some rather nice, simply constructed battleships.  Of course that put me in mind of some naval kit in my possession. Now, I posted something about these back in 2012, under the title: 'Mighty Armadas'.  These were Hong Kong made toys, battleships: Yamato, Bismarck and a third type, possibly American, I've never been able satisfactorily to identify; aircraft carriers (with jet aircraft), and submarines; several (large!) merchant vessels, one an ocean liner; and sea-port installations - wharfs, moles, cranes, storage facilities, and tugboats.  Just the sort of thing I would have loved to have had when I was about 9 or 10 years old!  Finding them in a bookshop in my mid to late 20s, I bought the lot - 4 or 5 sets.


I had promised myself to do something with them, and indeed made a start, but it all fizzled out as I took up some other topic.  It was this posting in KEV's  MINIATURE HOBBY that recalled me to these toys.

Looking through the inventory reminded me of at least partial reasons for my not doing a whole lot with these toys. There size does indicate a fairly large surface area upon which to fight battles. And this without the aircraft carriers' involvement.  But several ships had bits missing.  Since that last posting, someone had given me a couple of vessels of the same type - what looked like inferior copies, with even more bits missing.  The above, similar to the Bismarck class of ships wanted one of its gun turrets and more convincing superstructure. These I built up from balsa, lollipop stick and cotton buds. Long since being rather taken by the Japanese penchant for 'pagoda style' bridge superstructures I tended to make mine a lot taller than their companion vessels'.

When I got these, of course I recognised the Yamato class of ships at once. There being three of them, I thought it would be a neat idea to take the 6-inch gun turrets off one and whack them onto the flank midships of another, as the Mushashi, before the modification that removed them in favour of more anti-aircraft weaponry. It was a pretty stupid idea, really.  But the addition of the fourth vessel of the type demanded rather more remedial work.  So a whole new superstructure it got, and a new X-turret as well.  The added superstructure isn't based on anything: just an impression of 'battleship superstructurishness'. 'Impressionism' or 'expressionism' in war games modelling: take your pick!
For the Japanese type vessels, I'll probably keep the original names:
Yamato, Mushashi, Shinano (in this world never converted to an aircraft carrier) and the fourth, Kwazimodo.  The whole squadron is to be commanded by Admiral Hideki Mojo.

Somewhat taken with 'Kev's' simple naval war games rules, I thought of using them 'as is' in battle with these fellows.  But then, looking at them and recalling their 'real life' prototypes - and as it is a habit of mine to tinker - a terrible tinkerer - I came up, after a whole deal of thought, with some 'chrome' that might be added.

Kev's combat system goes:
Gunnery: 1 D6 per gun of the main armament.  Secondary armament is ignored.
Protection: It takes 10 hits to sink a vessel.
There you have it. Couldn't be simpler! 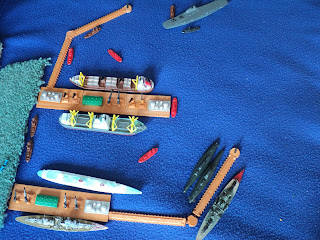 But what if you wanted to bring in differences in weight of gun, and armoured protection?  After a deal of thought, I came up with what follows.  In effect I used Kev's system as the benchmark for a 40,000 ton battleship armed with 15-inch guns, and used that as my point of departure.:

Protection:
I thought of combining overall weight of the vessel and belt armour for protection, but then decided that as the armour protection would probably contribute greatly to weight anyhow, I'd ignore the belt armour figure.  So, the number of hits required to put a vessel down would be calculated by the number of thousands of tons weight, divided by 4 (thousand), and rounded.

Battlecruiser Scharnhorst:
HMS Prince of Wales:
HMS Hood:
Panzerschiff Admiral Graf Spee (in case you're interested):
The modification for gun size is applied however many guns are firing, which will require a certain amount of ad hoc calculation - if one is applying specific 'damage' to firepower and speed. It's not hard, even as mental arithmetic, but some might find it tedious. As it happens, KEV's rules don't concern themselves with specific damage, nor with reductions in speed and/or firepower as damage accumulates.  Just as an exercise, and supposing we did knock out guns with damage, I worked out Graf Spee's D6 firepower as, one by one, its main armament is knocked out:

Of course, with protection at 3 only, one gun turret of 3 guns might be knocked out only after having taken 2 hits.   All this is by way of thinking about how one might set about building in such game mechanics.

After some thought, I decided that the gunnery ranges of anything from 11-inch on up were (roughly) on a par, and decided to leave that alone.


I suspect that if you want to get down to cruisers and destroyers you will probably be looking at a whole different system - a whole different game. More than any other nation, the British went mainly in for 'light' cruisers, for choice, armed with 6-inch guns.  The rate of fire of the 6-inch was quite significantly higher than the 8-inch and heavier calibres, and were on account of that probably at least as cost effective.  This is getting rather beyond the original concept of a very simple, quick-to-play squadron action.

Next time: The Fox and the Hounds - Battle of the River Salver.


Posted by Archduke Piccolo at 3:51 PM