The Railway Station having fallen to the burgeoning armed insurgency that was taking a strengthening hold upon the Nawabate of Tchagai, it fell to the leader of that Revolution to decide whether to advance at once upon the capital city, Nawabisbad, or to seize the vital sea port of Khandibar. This was an addition to the original Bob Cordery sequence, and one of those 'it seemed a good idea at the time' sort of things.

Fact is, though, it added something of a complication to the overall scheme, particularly as the war descended upon the place from the interior, emerging from behind the range of hills that separated the narrow coastal plain from the semi-desert to the north.  Had the approach been along the coast, then the linear sequence could more plausibly have been preserved.

So, what happened?  I have decided that the Sea Port action will be a kind of  'branch line' to the main sequence, like this:

Had I thought of it sooner, I might have suggested that, advancing from the East Road, the insurgents fetched a wide sweep inland to take the town from behind.  This might have induced the defenders to keep open the Coast Road west - introducing a strategic element to the campaign. Never mind!

Before resuming the campaign narrative, I should mention a further departure from the 'main' sequence of events.  The previous three battles having been fought solo, I invited Paul Jackson to play one of the sides in this action. Given the option, he took the Government side, taking the identity of Brigadier P.J. Damwright (had he but known it), commanding the Brigade Group protecting Khandibar.

Having taken the Railway Station - Maibad Junction - so quickly and with such ease, the leader of the Revolution, Colonel Peenut Buttahjars was tempted at once to push on westwards towards the Capital City - Nawabisbad - itself.  But there remained to give him pause the spectre of Khandibar, the sea port to the south, and its permanent Brigade-sized garrison, upon the flank of the advance. Leaving a covering force at Maibad, he led the bulk of his army, growing in confidence as well as numbers, to Khandibar (This is, of course, just 'atmosphere' - an artistic flourish to lend verisimilitude to an otherwise bald and unconvincing narrative.  The size of the forces in each battle is determined by the parameters defined for each scenario - a fixed number plus a randomly selected number of Strength Points to attacker and defender).


I probably ought to have given Paul his 'choice of weapons', as well as the choice of sides, but I had already drawn up the respective forces. Strangely enough, both sides rolled the same added SP points as they had for the Maibad battle. Coincidence, I assure you.  I've only just noticed! The force available to the Government came to:
36 + 6D6 = 36 + 14 = 50SP, even.   They were organised in the following way: 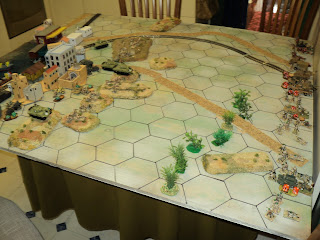 Although the Government forces were permitted to include the line D---D, Brigadier Damwright chose a more conservative line.  This tended to leave the government's left flank open, guarded by the strongly-held central massif overlooking the railway and Maibad road, with 'D' Squadron Aagravaa Armoured covering the exit of the western pass.  What effect that would have on the action - if any - will be revealed next time.

Posted by Archduke Piccolo at 12:47 PM