Long Live the Revolution - Return to the Station 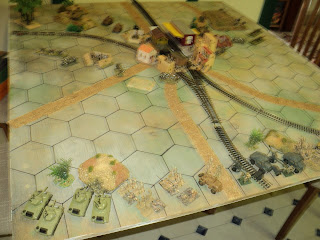 Following their signal defeat at Nawabisbad, the Baluchistan Armed Revolutionary Front (BARF) army fell back only as far as Maibad Station, where they determined to make a stand, lest the BARFist forces at the time occupying the Khandibar sea port be cut off. Learning something from the Government's adamant defence of the Capital, Colonel Peenut Buttahjars ordered the creation of divers field works and field obstacles to augment the defence. There was no doubt the Government forces would follow up their defensive victory with the avowed aim of extirpating the insurrection outright.

Sure enough, less than a week after the Nawabisbad battle, there the Government forces were, lined up at daybreak of 9th September along their chosen start line. The layout of the defences rather invited attack along the northern flank, and so the Government chose; the entire 6th Bananarama-putra Armoured Regiment forming the extreme left wing ready to sweep into the BARFist right rear. 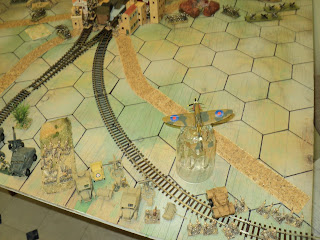 In a determined effort, Major-General Lord Redmond had gathered together a force well equipped with armour and artillery - a whole regiment of each, a couple of armoured car squadrons, and two infantry battalions.
(As the attacking side, the Government were allocated 54 + 6D6 in Strength Points.  The dice roll was a tremendous one: 25 additional SPs for a total of 79!) 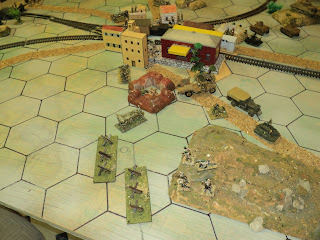 For their part, the BARF Army were confident of serving out to the government forces the same spicy dish with which they were regaled at Nawabisbad.
(They had good reason:  their dice roll for SPs was even tremendouser than that thrown for Government: 36 + 3D6 = 36 + 15 (!Wow) = 51SPs. As the difference between the respective sides was 28, the defending BARFists ought to have got 14SP in defence works. A couple of miscalculations or instances of woolly thinking short-changed them slightly - possibly making up for the Government 'staff error' that left B/22nd back along the road.) 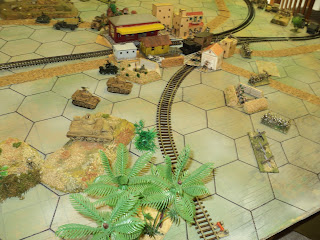 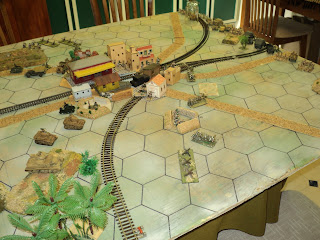 Before concluding this posting, a word on the Government's air support. I allowed the Spitfire flight to carry out 3 strafing passes, one only in any given turn. Out of ammo, they could then depart, still under activation, the battle area at no SP cost to the Government forces. Partly I just wanted to get a bit of 'Air' onto the field, and partly I wanted simply to try out aircraft handling over a hex field.

To be continued.
Posted by Archduke Piccolo at 3:59 PM