It occurred to me this morning, reading over the latest comment, that I ought to have identified the figures used in this action.  They were: 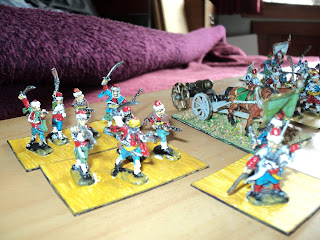 Rather than using my Azuria (French Foreign Legion) figures as Turkowaz, I'm looking for something more closely resembling Turks of the 1870s.  Strelets-R provides just the thing: 1877 Russo-Turkish War Turks.  Unfortunately finding figures available is not proving easy.  I think I was lucky to get the foot Bashi-Bazouks.  I just need one box each of Regular Turkish foot and horse, mounted Bashi-Bazouks and the Turkish Artillery (with Krupp guns).  And there would be my army.  Who would do a one-box run?

Although the Plastic Soldier review is not exactly fulsome in praise of the Strelets-R figures, I'm rather taken with them.  They paint up nicely, and, if the details are a little exaggerated, that goes to clarity of detail, and to the character of the figures.  In 'character', Strelets-R takes rather after Airfix, but in my view the Streletz figures - what I've seen of them so far - are better quality.

Meanwhile, I have been reading Bob Cordery/ Eric Knowles's Madasahatta Campaign, and looking forward to seeing Paul 'Jacko' Jackson's campaign based upon a similar concept and premise.   I thought I was pretty creative coming up with names for people and places, but in the late Mr Knowles, I acknowledge a master.

Posted by Archduke Piccolo at 3:27 PM