It was whilst browsing through some old back-issues of Wargames Illustrated that I ran across Bob Cordery's article 'Balkan Wars' Matrix games (Issue 66).  They made interesting and intriguing reading, once again.

In a subsequent article (WI78) Bob had created a set of rules and army lists for playing out the battles that might have arisen from the overall game.  The DBx ancestry of this rule set is clear, and bears some similarity to the Horse, Foot, Guns rule set developed I think by WRG some years later.  However, I thought they might go very well with the Portable Wargame systems.

Well, this was thought-provoking beyond my powers of resistance.  There was never any prospect of my running a matrix game as such, but how could one pass by such resources and not try to make something of them, even as a solo campaign?

This was never going to be a whole new project.  The armies I have already: my late 19th Century 'Colour' armies.  Of course, the role of Turkey/ the Ottoman Empire/ the Porte would be taken by Turcowaz/ the Settee Empire/ the Door.  That was easy.  How were the armies to be distributed?

In WI78, Bob outlined army lists for the belligerents, from which I developed the armies.  Here they are:

Now, having sorted the armies, and decided upon a tactical rule set, how do we run the campaign? At the moment, I'm looking simply at 'area movement' according to the original map. The spaces upon which armies may stand are the outlined regions and provinces AND the fortified cities. However, only one army may occupy a fortified city. An army in a fortified city may move out only into the provincial area within which the fortified place stands. An army wishing to enter a fortified city, may do so only from within the city's provincial region.

My reading of the history of the First Balkan War indicates that if the four nations opposing the Turkish Empire could in only very polite circles be called 'Allied'. For a start it's not clear why Montenegro was in it at all, apart from territorial ambition, as that little principality had lately enjoyed good relations with the Porte. Yet Montenegro was, by half a week, the first to declare war.

The others seemed to have made cooperative noises before declaring war against Turkey, but almost all such notions were set aside once it all began. Only Montenegro seems to have been willing to enter into 'joint ventures'. By contrast, the historical army of Stepan Stepanovic, a combined Serbian-Bulgarian formation, split into its constituent contingents (under Bulgar orders) from almost the moment the war got under way.

So I am inclined to disallow all cooperation between the 'Allied nations', even armies within nations, with the exception of Montenegro. Without that exception, I reckon the tiny Montenegrin army would be in for a toughish time of it. 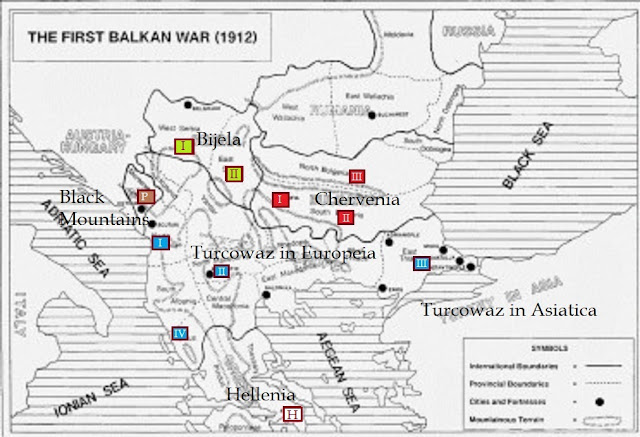 The starting points have been shown on the map. The locations of the four Turcowaz armies was somewhat dictated by the opening situation of the Matrix, that left limited choice. Those of the 'Allied' armies had been left open, but I decided they would all begin in separate regions, one of the armies in 'South Chervenia' actually being located in the capital, Sofia.

I was wondering if somehow I could make some kind of use of the 'matrix card' deck. One feels something ought to be possible - and it would help the 'narrative' along, too. But so far, the flash of brilliance is eluding me that would show me how it might be done.

Appearance of the armies: I am making no pretence to be reproducing the armies and uniforms of the historical counterparts. The Bulgar Chervenian army infantry will be resplendent in very British-looking red coats, just by way of an example.

For a while I thought of using the transport elements as the limbers or pack animals for carting artillery around.  And so the pictures would seem to indicate except that there are in many armies more guns than transport elements.  I have decided that if I'm going to include gun transports they:
(a) will be additional to the logistics elements in the army lists; and therefore
(b) will be integral to the artillery elements and strength points thereof.

Battles:
At the moment, the thought is that battles will be fought between individual armies, using The Portable Wargame. If two armies of the same nation enter a region occupied by a single enemy army, each will fight the defending army separately if they arrived from separate provincial areas (or cities); but may attack together if they arrived from the same provincial area. However, both armies will be subject to their own unit activation, and their own exhaustion point.

The objective is to conquer the whole Turcowaz Imperium west of Constantinople Ionople, with the Chervenians showing a considerable interest in taking that capital, as well. Each of the Allies have their territorial ambitions, perhaps more collectively than can be satisfied once the spoils are to be divided...

Posted by Archduke Piccolo at 5:46 PM