The Blacklands War - the not-so-new project.

In my previous posting I set out the beginnings of a nice little war, using bits and pieces of my 'Colour' armies, with some American Civil War figures, guns and vehicles to supply the gaps. The motif is the First Balkans War, and the matrix game set up some 30 years ago by Bob Cordery.
I have decided to use the original order of choice to 'pick' (sic) matrix cards (I presume sight seen, rather than a random choice) as the order of moves. I don't think I'll be using the matrix card system as such until such time I can think of how I can make in work for a solo game. So Monteneg ... the Black Mountain Principality, declared war first, and moved first - its small army marching into the Turcowaz province of Kosovo (see Map):

The second mover is Turcowaz (followed, in order, by Bejela, Chervenia and Hellenia). About to work out the moves, I read the Mad Padre's offer to contribute in some way.  As it is now the turn of Turcowaz, and it is them against the rest, I have invited Michael to make the moves for the Empire's four armies. The altered map is (I hope) a bit clearer, especially where the provincial boundaries are (the thin red lines). All the armies except the Chervenian Ist Army (standing in SOFIA) and the Hellenic (ATHENS) are standing in provincial areas. I've added in Navy symbols for Turcowaz and Hellenia, but haven't yet worked out their role. For the moment, though, the Turcowaz Navy is immobile.
Perhaps to aid visualisation, here are the relative sizes of the respective armies in very general terms:
Black Mountains Army - Small (moves from BMP to Kosovo)
Bejela:
I Army - Medium (in West Bejela)
II Army - Small (in East Bejela)
Chervenia:
I Army - Medium (in Sofia)
II Army - Large (in South Chervenia)
III Army - Medium (in North Bejela)
Hellenia:
Army - Medium (in Athens)
Navy (if it enters the game) - Small (in Athens (Piraeus))
Turcowaz:
I Army - Between Medium and Large (in North Abaloni)
II Army - Large (in North Macedonia)
III Army - Large (in East Thrace)
IV Army - Medium (in Epirus)
Navy (if it enters the game) - Small (in the Sea of Marmara). 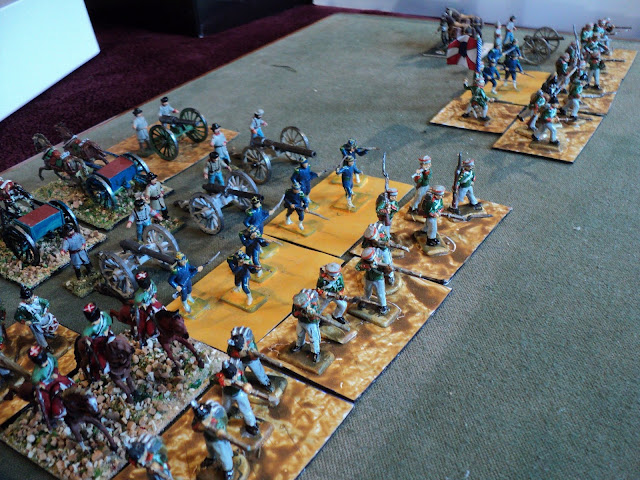 Overall, the 'Allies' outnumber the Turcowaz armies in raw numbers. But Turcowaz has a great deal of strength piled up in the western end of its Europeian imperium. Quite a distance separates IIIrd Army in East Thrace from the rest. Of course the Empire knows what is afoot: territorial aggrandizement by all four bordering powers. The Empire plans to resist the loss of its provinces as much as it possibly can. The Black Mountain Principality, having declared war first, has seized Kosovo with its small army. Anticipating the imminent declaration by the other powers, the Turcowaz armies are soon on the march...
And this is where the Mad Padre comes in (I hope), assuming the role of whisperer in the Sultan's ear.  What does he advise? What orders will be sent out?
Each army may move from one province to another; OR from a provincial area into a city/ fortress within that area; OR from a city/ fortress into the provincial area surrounding it. A forced march might allow two such moves in one, but the situation would have to be pretty urgent to justify such a move.
I'll here invite Michael to make the Turcowaz moves, before the others I'm quite happy to receive them through the comments section, though if he prefers a different channel of communication, that will be fine by me.  Any questions, please let me know.

Posted by Archduke Piccolo at 8:13 PM