Several years ago a friend started up an 'imagi-nations' project built around the crumbling empire of Harad - modelled upon Iran, c.1980, imagined as a vast Middle Eastern imperium stretching from Pakistan to the Mediterranean coast. This friend, whom I tend to think of as 'Evil Uncle Brian' (from his former email address, I think), is the sometime author of 'A Fistful of Plastic' blog spot, and originator of the Harad group on Facebook. Neither gets much traffic these days.  Pity.
His invitation to join in I resisted for a considerable time, being finally persuaded by the look of some of his battles. We did play out one interesting scenario, back in 2012, I think (entirely his gear), but otherwise not a lot happened except that I received a fair bit of kit - quite a lot, actually - that I'd like to think was surplus to Brian's requirements. The unfortunate part was that Brian got a dream job up north, he left town, and so the project went for some time into limbo. But not before I drew up a map of the Middle East (Baluchistan, Medifluvia and the Mesogesian coast), and created my own country the Nawabate of Tchagai.  The Nabob (Nawab) as Head of State was Brian's idea.  I called him Yeswih Khan, son of Maibiwih Khan.  Thank you, President Barack Obama!
I still poked around with it from time to time, and went into a little 'back-history' with the Developing the Portable Wargame campaign 'Long Live the Revolution', which series of postings I began late last year.
But it was Tim Gow's Little Cold Wars that gave me a certain impetus to develop the Nawab's army.  The organisation lists therein suited me better than the Command Decision type lists, which called for a heck of a lot more vehicles. However, I went for the 'CD' 'look' for the organisations overall. So here are 5 rifle battalions - mechanised, motorised and 'leg' - and a reconnaissance battalion, still a work in progress, but gradually getting somewhere. 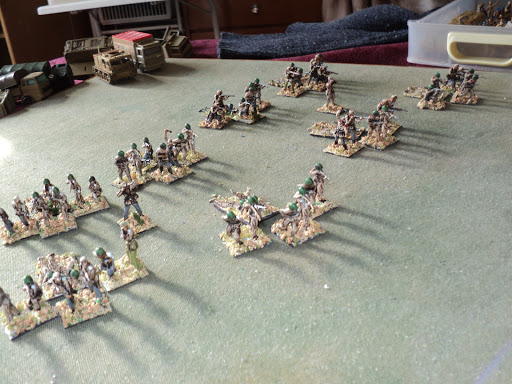 Now, all I need is to develop an enemy - possibly from among the Nimruz hill tribes, if not Harad itself.  Maybe that is what will become of the 6th, 7th and 8th battalions (not pictured), a cadre of soldiery for an enemy supported by the CCCP (Collective Cooperative Confederation of Peoples).
Posted by Archduke Piccolo at 10:22 PM