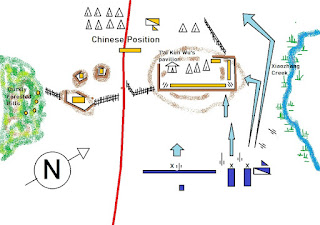 In the early morning dark of the moon four days past new*, the Union columns set forth on their march to envelop the northern flank of the Chinese earthworks. The creek to the right, barely visible in the last-dawn-of-summer half-light, served to guide the columns on their way.  Tenth Cavalry Brigade  led, followed by 38th Infantry Brigade, then the 37/39th.  The 17/19th formed up in a line facing the earthworks on the hill, its machine gun detachment on the left against any possible move by the enemy to flank the Union army.

Not all the Chinese position was dug in. The large hill that formed their left flank was crowned with earthworks, occupied by two small artillery batteries, 15/16th Conscripts facing east towards the Union army position, and 5th/7th Regulars overlooking the creek, distant somewhat beyond the extreme range of their rifled muskets. The Chinese right featured a series of redoubts or redans upon smaller rises in the ground.  The gaps along the front and to the left rear were covered by wooden palisades.  These constructions offered no real cover or concealment, but were a very considerable obstacle should the Union try to force them. The Chinese right was covered by a tangle of thick woods that concealed more of the randomly scattered small hills.  One look at that feature persuaded Major-General Jackson that, if he wanted to attack, his choices were limited to a direct frontal assault, or to chance his arm with the enveloping manoeuvre. 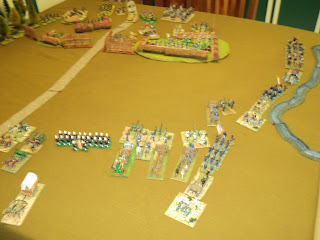 As the brightening day revealed the Union march, they were induced to turn in towards the Chinese works rather before the flank march was fully developed. The cavalry found their own further advance faced by the enemy cavalry, who eventually pulled back to make way for a line of regular infantry.  For the time being, the cavalry waited, whilst the main attacks went in up the hill.

Not only were two whole formations - 6500 infantry plus 8 guns - packed into the giant earthwork on the hill, about as many again sat behind palisades flanking the position.  But the hill was the key, and Jackson determined to take it, concentrating the main effort - guns, machine guns and two brigades - in the assault upon that point.  The 17/19th Brigade would push against the southern end of the hill and the defenders behind the palisades. 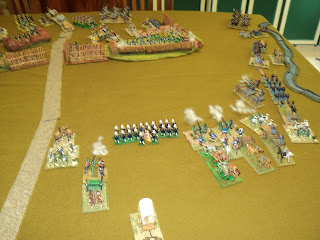 A barrage by five gun batteries - 40 guns, 16 of them heavy - began proceedings, answered rather feebly by the Chinese cannon. Under the cover of this bombardment, directed at the northeast angle of the main fortification, the infantry of 38th and 37/39th Brigades advanced rapidly into the attack, accompanied by their machine guns. 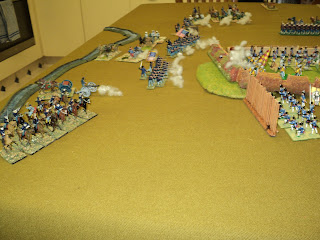 At least the regulars had the range to shoot back; there was nothing to poorly equipped conscript formations could do by way of reply, unless the advancing bluecoats should close enough that their smoothbore muskets might have an effect. Soon, what became known to the defenders as Xuèxīng de jiǎodù - Bloody Angle - became a charnel house, enduring shot, shell, machine gun and rifle fire. Rushing forward rather too rapidly, 38th Brigade came under telling return fire, and fell back a short distance. But their own rifle fire never ceased. Forty guns, two dozen machine guns, over 6000 magazine rifles - how could the poorly armed defenders hold, even protected as they were? Though 38th Brigade had fallen back under the weight of Chinese return rifle fire; faced only by smoothbore muskets, and the Chinese half-battery silenced, 37/39th Brigade pressed right up to the earthworks. 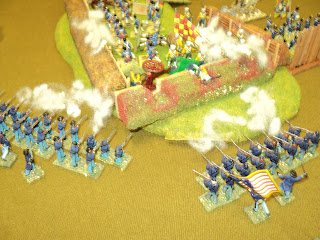 An aside here.  The earthworks were intended to be pretty effective, reducing at all ranges of incoming, their shooting 'Die Range' by one, and then halving any 'hits' for effect.  But even in the face of such protection, the losses among the two Chinese formations mounted at a rate far more rapid than those among the Union formations. 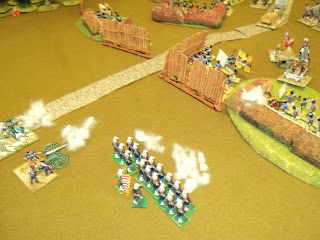 As the attacks on the 'Bloody Angle' were going in, 17/19th Brigade pushed forward in an even more circumspect fashion. Though there was little to fear from a Chinese counter-attack, as the palisades were as much an obstacle to the Chinese as to the Union, the Brigade's machine guns and artillery were placed to cover their open left flank. But the Chinese army's offensive spirit had been broken at Camp Supply - they might attack to recover lost ground, but not to take enemy ground.  Not any more. As the 17/19th rifle fire added itself to the weight of the other Brigades' against the hilltop works, the artillery and machine guns began to focus upon the relatively unprotected 19th Conscript formation behind the palisade between the hill and the road. 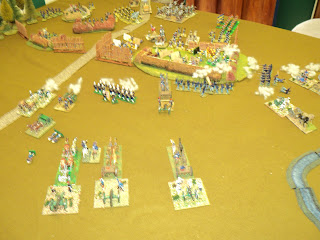 Meanwhile, the Chinese cavalry, not daring to face the guns of their mounted enemy, fell back, in good order, a short distance to make way for 6th/7th Regular formation. For the moment, the refused flank seemed to be holding fairly comfortably, though under bombardment by the Union flying artillery. There was nothing with which the defenders could respond. 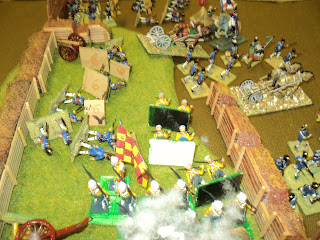 When the collapse came, it was sudden. Both half batteries silenced early - the northern, and then the southern a half-hour later - the 15/16th Conscript formation simply collapsed under the weight of concentric attack and concentric firepower. At once they were reduced to a horde of fugitives making for the open half of the earthwork.  As the 37/39th Brigade surged over the breastworks, the 5th/7th Regulars clung on as best they could, but were shortly levered out of their position. The fugitives barely made their escape the way the Conscripts had gone. 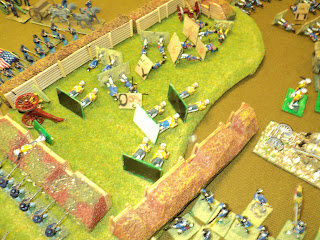 In response to this rout, T'ai Kun Wu ordered up the 1/3rd Regulars. The intervention of 4000-odd rifles - even single shot - might yet have turned the scale, but for the thousands of fleeing routers coming the other way. In the face of this human wave, the column could not advance - and there were soon more to come. The hilltop abandoned, Nineteenth Conscript formation drew the attention of the rifles of 17/19th Brigade. These conscripts would not last much longer. 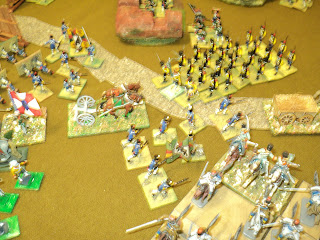 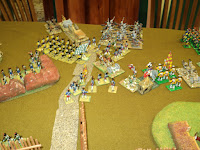 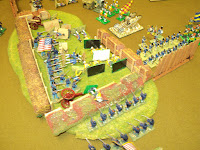 On the Union side, 37/39th Brigade was first into the fort, sweeping through to the rear face.

Against that threat, the 17/18th Conscript formation, behind the hill, turned to face the oncoming bluecoats. Though they were able to bring their muskets into action, all the advantages lay with Bidwell's Brigade: numbers, firepower, protection. Thirty-eighth Brigade might have engaged the enemy formation from in front, but as that would have masked their support weapons, Colonel Zook of 223rd Battalion - Brigadier-General McKittrick having fallen with an incapacitating leg wound - ordered up the infantry to pass behind 37/39th, with the view to rolling up the Chinese line. 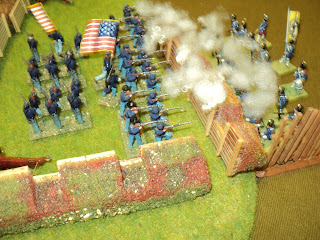 In a last desperate attempt to retrieve a situation rapidly getting out of hand, the 6th/7th Regular Infantry essayed a sortie (I stretched a point, here) against the Union Cavalry. Dismounting for fire action, the Union horsemen advanced to meet them. Though the blue cavalry had half the numbers of the enemy, they had vastly the greater firepower. In their private little battle, casualties were heavy on both sides. By the time the Union cavalry gave up the fight to fall back and remount, the regulars were themselves shaken and about ready to dissolve in rout. Both sides had had their firing lines halved. 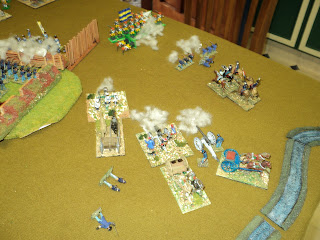 The conscripts beside them were in a similar state - still fighting on, but with an air of imminent collapse. Aside: I used a very simple morale rule for these battles:  whilst a unit had at least 50% the numbers with which it began the battle, it was OK; the moment they fell below 50%, the unit was un-OK.  At this moment, both 6/7th Regulars and 17/18th Conscripts had precisely 50% of their numbers still in hand. 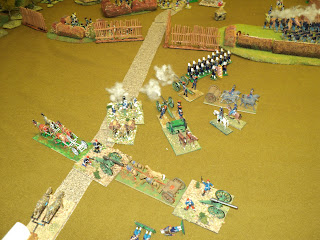 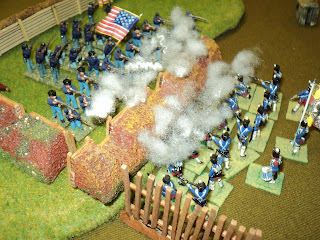 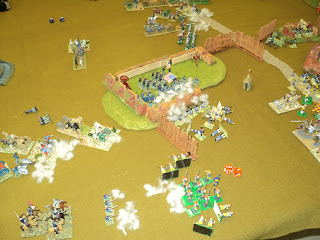 The writing was by now deeply etched into the wall, in letters large and unmistakable. T'ai Kun Wu knew it. Never especially confident in his army's ability to stem the Union tide, he had at least to try. He could not in all conscience have done otherwise. But now he ordered the retreat to be sounded, and his army at once began wearily to crawl off the battlefield. The retreat was not to stop until the army was well beyond the western edge of the Forbidden Lands.

Major-General Jackson disdained to order a close pursuit. Directing General Klamath's cavalry to follow and observe the Chinese retreat. he gave it as his view that the enemy's attempt to recover the lost lands was now spent. They would not be back this year, what was left of it, nor for several next years. But there was no disguising the fact that the Chinese emperor - any and all future emperors - would never relinquish their claim to those lands. 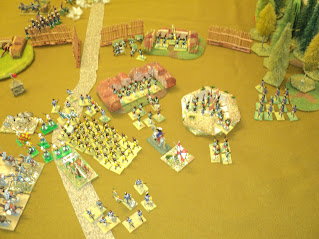 Losses to the Union were comparatively light for an assault against superior numbers in a fortified position - just 1000 all told, though Brigadier-General McKittrick would be out of action for several weeks with a fractured tibia.
Although they were not as great as that of Camp Supply, T'ai Kun Wu was if anything even more appalled at the numbers lost in this last battle. Seven thousand dead, wounded and missing, once the stragglers had been gathered in. Such was the effectiveness of great firepower against earthworks without a similar firepower to defend them.
As his army struggled westward, dragging off its wounded, T'ai Kun Wu sent another delegation into the Union camp.
'This campaign is finished,' the delegation's head frankly admitted, 'but we should wish for a settlement in respect of the prisoners you now hold.'
The Major-General offered no demur. On condition of the total withdrawal of the Chinese army from the Forbidden Zone, he undertook to send the whole pity of POWs, under escort, within the month. He also permitted the Chinese to inter their dead upon the field of battle with such rites as the Chinese preferred, and to care for wounded POWs unable yet to travel. He had no doubt that even were the Chinese inclined to break faith - not that he expected any such thing from a foe of T'ai Kun Wu's quality - that broken army was never going to stop until it reached its railhead. Wearied from two month's hard campaigning, Tenth Army itself would be needing a lengthy rest, recovery and recruitment...
The War was over.