Still shaking down my wargaming programme - hard to organise when surrounded by plenty of gamers who are not of like mind to oneself. I thought I'd show the three generations of Minifigs that make up my French army. Actually, there are other manufactures as well, some of which I don't remember, all making for a fairly polyglot army. 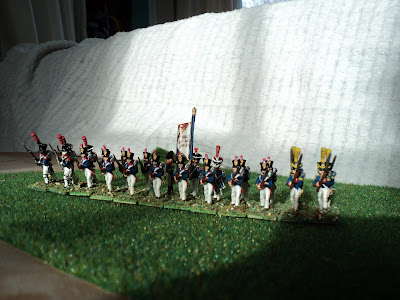 These have since been repainted, of course: as the 17th Line Infantry. The Grenadier company belongs to a later generation of Minifigs, as are the drummer and flag bearer, but the rest are from that first purchase. 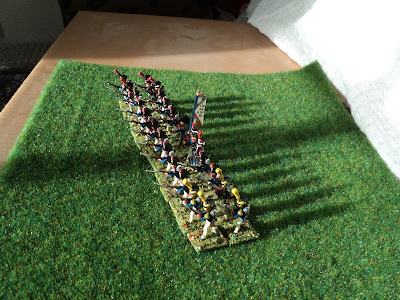 I had also taken to leaving the roundels with the unit numbers uncoloured on my flags, which are all hand drawn and coloured. Two reasons for this: it looked good; and the numbers were easy to read. I found that the felt pens used for creating overhead projections gave nice bright colours.

Although my army is/was intended to be generic, its early basis was Marshal Lannes's V Corps at Austerlitz. However, it has since well outgrown that formation! 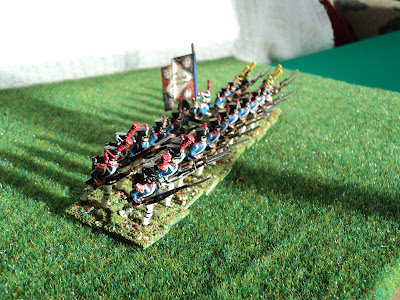 A buddy happened to be specialising in the army of Hessen-Darmstadt, and sold me a similar number of older Minifigs - 36 cruders, smaller, and more fragile French figures, but at least it doubled the size of my army. With them I got 36 (yep) figures of Black Brunswickers... 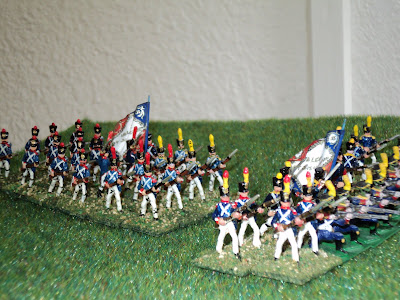 Here, the 15th Light Infantry form line, supported by the column of 33rd Line. In my army, all regiments are represented by a single battalion - a form of added scaling that allows for larger formations to be fielded.
The unflocked stands in 15th Light are not of course Minifigs, and, having picked them up a year or so ago in a 'Bring and Buy' sale, have no idea of their provenance. Maybe the knowledgeable reader will tell me. At any rate, these 'foreign' figures were enough to build up the 1st Generation Minifigs remaining after the formation of 33rd Line into the 15th Light. The kneeling firing figures make fine Chasseurs, though not a whole lot shorter than their standing compatriots. At that, 15th Light is only 5 companies (20 figures) strong, rather weaker than my standard 24-figure battalions/regiments. 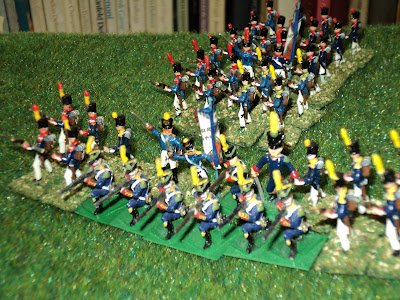 As my collection of Minifigs - plus a Division's worth of "Front Rank" figures bought in 1990 - increased, I was inclined to 'retire' these older Minifig figures. But they kept some sort of existence as the 13th Light infantry for quite a while, then as 'garrison troops' for campaigns. But lately, I have recalled them as integral to the Army as a whole. Waste not, want not... 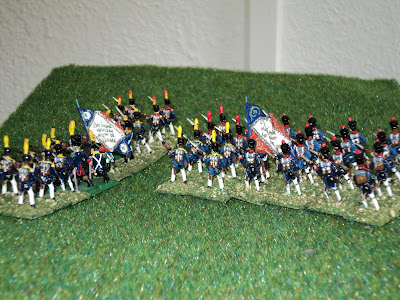 When in 1980 I bought some more French and began my Austrian army (through 'Tin Soldier' in Sydney (Australia)), I discovered that the whole Minifig range had been redesigned. Very nice, crisp figures, a pleasure to paint. 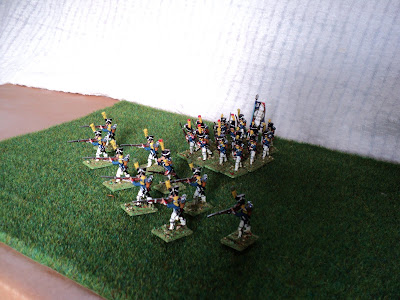 Here is the 'new' 13th Light Infantry. By way of variety, as the rest of the army in in the 'Advancing' pose, I thought I would have a couple of companies 'Firing'. One became the Voltigeur company, the other, one (or half of two) of the Chasseur companies. Here the two 'firing' companies form a skirmish line protecting the column of the remaining four. 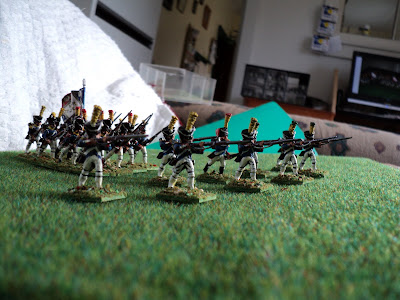 Posted by Archduke Piccolo at 1:31 PM