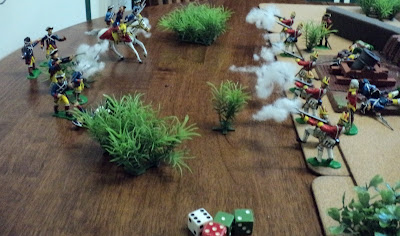 Having captured the Rebel mortar emplacement, Lieutenants Hugh Pettifogg and Banastre Mirleton, British Grenadier officers, would have set about destroying the piece that had been proving such an annoyance within their own besieged lines. But the American response, though not soon enough to prevent the loss of the battery, was prompt enough to forestall demolition. 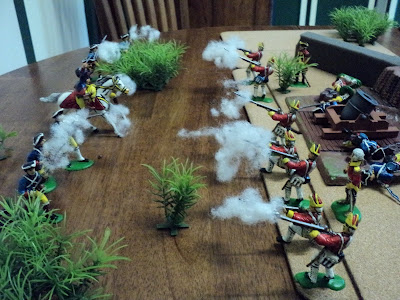 Mirleton's section had taken heavy loss during its attack, just two of six grenadiers remaining with the lieutenant. Lord Hugh had been luckier, just one of his grenadiers now lying upon the glacis. Facing them were Major Horatio Styles on horseback with four men on foot, and Sergeant Eugene Wappcapplett with three more. Without suitable weapons, the bombardiers were ordered to await the outcome. Nine men against nine - seven muskets against seven - even odds, and the the lack of rear cover to the earthwork meant no advantage to the defending Grenadiers. 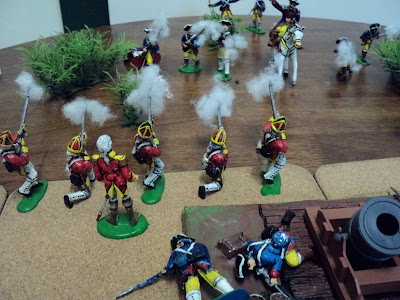 The shooting by neither side proved very effective to begin with, but Pettifogg's section were lucky enough to bring down Sergeant Wappcapplet on the American side. Against that, Mirleton lost one of his two remaining soldiers, and began to fall back towards the earthwork. 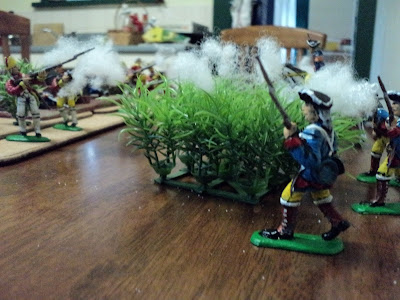 Thus encouraged, the Americans continued their advance. Lord Pettifogg also began to pull back his men to conform with Mirleton's retreat. The flow of the former British advance now became a pronounced ebb. For the time being, though, the popping long-range musketry proved fairly ineffective. 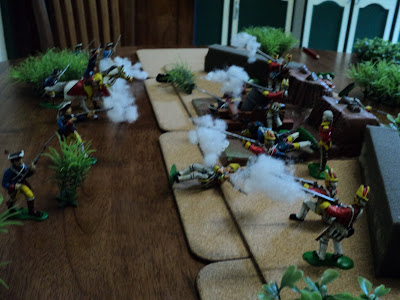 Then came disaster for the Americans. A lucky shot from Mirleton's sole surviving grenadier struck Major Styles; he reeled in the saddle, pitched backwards over his mount's crupper, and lay still in the dust. 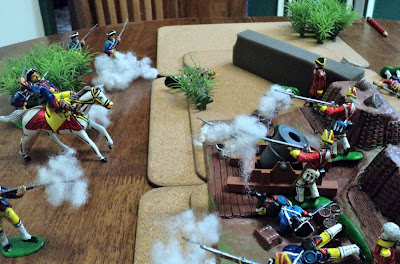 The moment's horror became instantly a surge of rage as his men carried on their advance. Retribution was swift, as Mirleton's last grenadier staggered back against the revetments of the Mortar battery, there to lie motionless. 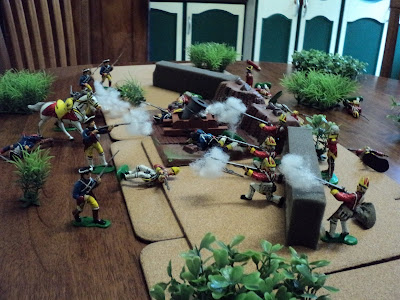 Without a command, Mirleton was up and over the earthwork and away. Meanwhile, Wappcapplett's small section had also been reduced to a single survivor, though they had given Lord Hugh's men as good as they had received. With nothing further to be achieved, Lord Hugh also pulled his men out of the earthwork. 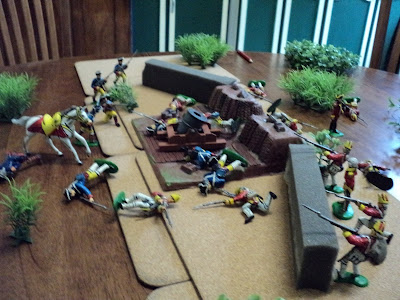 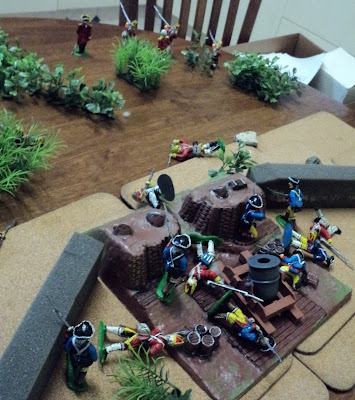 It had been a costly little action for the British, and something of a qualified failure. True, they had overrun the mortar, but had been unable to put it out of action. Having lost five men in the assault, they lost four more whilst being driven out of the position.

The American loss in mere numbers had been lighter: the three-man battery picquet, and four more in retaking the earthwork - seven in all. If the loss of a valuable NCO (Wappcapplett) was one thing, to lose the services for even just four or five weeks of such an officer as Horatio Styles - found badly wounded in the shoulder and concussed by his fall - was one that the recapture of a single siege mortar could scarcely compensate.

The verdict? Well: it was a fun game, but we'll have to try something a bit more sophisticated for it to be a fair test of the OMOG rule set.
Posted by Archduke Piccolo at 11:14 PM