Battle of Zerbst - 1. The Gathering Storm

Having made his arrangements whilst in Zerbst, and at least for the time being settled the matter of summary executions without due process, Marshal Antoine Noailles gathered his army, and marched south.  In this he had had to take a considerable gamble.  His entire army was with him: not a single soldier had he left to watch the recently defeated Electoral column on the road to the east of Zerbst.  It was just as well, he reflected, that the Council of Burghers hadn't known this, or his visit to the Rathaus might not have gone so well.  As it was, he cursed the delay that has forced his overnight stay in the town. 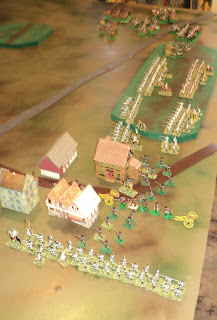 For one thing, it meant more time for the Archduke Piccolo to join his colleague, Baron Glockenspiel.  It was known that the Imperial Army approaching would then be formidable, far more than a match for the Rechburg column that stood between it and the vital town of Zerbst.  It meant a delay in the battle.  It furthermore meant that to have any real chance of bringing the revolt to a satisfactory conclusion, Noailles had to bring as much force to bear as he could scrape together.   And that meant leaving the road open to the east.  Could he defeat the Imperialists, and lost the town meanwhile to the Electoral column, he would have sufficient strength, he hoped, to retake the place, and then be in a position strong enough to bring Bishop ter Plonck and the Emperor to the negotiating table.

So ran the thoughts of the Marshal as, after accompanying his army for a couple of days,  he rode on ahead  to join his Ally, Count Raunchfester.  The news he received was not good: the Imperialist columns had indeed linked up just the previous evening, and were on the way north.  Approaching the village Asper, Noailles and Rauchfester surveyed what they could see of the Imperialists. 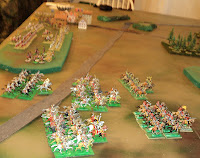 The sight was not encouraging.  Hoping to hold the line of the Unsaunter Stream, they could see that the Imperialist cavalry were already across it, or would very soon be.  The splendidly disciplined Imperialist infantry swarmed over the Paisley Ridge and through Moorgham Village close by the stream.   The Archduke was not known for dilatoriness!

As his allies marched forward to occupy the Asper Village and form a defence line, Noailles sent back to hurry forward his own men.  Time was of the essence.  There could be no delay.  If the Rebellion was to have any chance of success, now was the time to defeat the Imperialists. 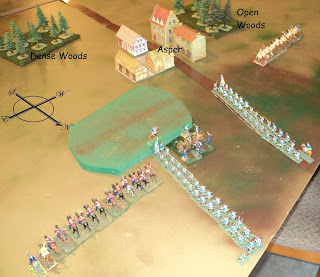 The Imperialist Army looks heavily outmatched, except in the Cavalry arm, but what Marshal Noailles has to bear in mind, is that although his army has seen action and will have improved its performance, it is still not up to the class of the Imperialists nor the regulars from Rechburg.  For all that, once the rebels arrive, the Archduke will realise that his available strength will by no means be too much to overcome the superior numbers arrayed against him.