Continuing the Archduke Piccolo's report to the Emperor of the Battle of Zerbst, 13 March, 1739.


The morning action having failed to achieve the destruction of the Rebel left flank, I drew in what remained of our Horse, and regrouped the whole Army to face the retaliation I hoped the enemy would attempt.  If it took several hours to complete my preparations, he too was finding the undertaking required lengthy regrouping from the defensive stance he had adopted at the outset.  Palffy Infantry was marched to the right flank to form a front behind which the Cavalry could retire and reform.  The 1st Artillery Company was withdrawn from the hill upon which it stood and was to redeploy in the centre of Palffy Regiment, forming


a formidable line should the enemy seek to attack it. The open flank to the east was to be covered by the Cavalry.  Meanwhile, Hildburghausen infantry took over the position evacuated by the artillery.


By now our preparations were about complete.  Second artillery were in the process of deploying on the flanks of the defile between Hildburghausen's hill and the Jagers' dense woodland.  Behind them stood the Baden-Durlach Infantry, with a detachment of Alt-Colloredo forming upon its left, with its own left flank thrown forward.

On the left Arenburg and a detached company of Alt-Colloredo formed a re-entrant awaiting an attack by what appeared to be a full Brigade of Rebel infantry, supported by jagers and Heavy Horse.  On this flank, however, the enemy declined to try conclusions, whilst the action developed on the other flank.
( Unfortunately, once again, picture taking got forgotten as a brisk action developed on the right flank, and it all happened between this and the next picture.)


The action on the right opened with a quick attack by the 1st Ulrichstein Cavalry.  But by this time the artillery detailed to support the infantry had arrived betimes and were already waiting for this moment.  The Palffy Infantry gallantly held their volleys to the last moment, the enemy horse were seared with canister at point blank range, and the whole attack collapsed before they could make contact.  In short the enemy cavalry were served out in the same manner as our own Trautmannsdorf Cavalry had been earlier in the day.


Shortly afterwards, the enemy 5th Battalion, supported by a regiment supplied by the Herzog von Rechburg, began mounting the hill to assault Hildburghausen Infantry.  That gallant corps once again lived up to its reputation for hard fighting.  Advancing to the crest, they delivered into the faces of the enemy such a blistering series of volleys that scarce a third remained with the colours at the end of the half hour.  True, Hildburghausen lost some 80 men out of the line, many due to the fire of the Rechburg supporting infantry, but it is estimated 5th Bn lost three times as many, and the Rechburgers did not come off unscathed, neither.
That decided the action, right there: not so much the decisive victory we felt entitled to expect early in the morning, but far less than the crippling of of one of the pincers closing upon his army that Marshal Noailles must have been counting upon.
As the enemy drew back I had begun building up towards our right (eastern) flank with the view of renewing our own effort there.  However, by now it was already mid-afternoon, and Baron Glockenspiel represented to me (actually it was Barry) that we had already achieved enough to claim the victory - at least from a strategic point of view - and rather than risk compromising the success we had gained by an assault of uncertain success, we should wait. 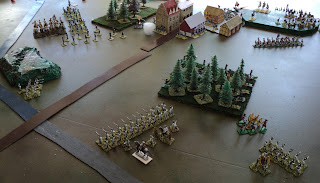 Somewhere east of Zerbst, General Plodt of Altmark-Uberheim must once again be marching upon Zerbst.  The city could not be allowed to fall whilst the Imperial Army remained undefeated, therefore the rebel Army must retreat.  Within two or three days the decisive battle must be fought, and, with the cooperation of the electoral troops, the Imperialists would have the superior numbers.

Reluctantly, the I allowed myself to be persuaded.  The action sputtered to a halt, as the opposing armies faced each other across the shallow valley east of Asper Village.  Confident that the enemy would evacuate their positions overnight, I gave orders for tomorrow's follow-up.  Losses in this action were slight - some 400 on our side, and somewhat over 500 of the enemy.
I remain, Sire, your most humble and obedient servant,
Archduke Piccolo, Marshal-General

The Ulrichstein Campaign to be continued...

Posted by Archduke Piccolo at 12:31 AM