In the Year of Our Lord, 17-something-odd, amid the dissolution of the Council of Peers and the discovery that Great Britain might, after near on a century since the decease of Charles Stuart, after all have a true-born king, copies of this tract was found tacked to the doors of churches, taverns and halls throughout London.  Though the eponymous Duke was not named in the tract, everyone - including His Grace himself - knew who was the subject of its matter.

This, of course, is a plug for Barry Taylor's Lyndhurst Chronicles, a story of an anti-historical Great Britain, an alternate Great Britain, a what-if Great Britain, after a royal interregnum dating from the failure of the Stuart line after a mere two generations.   It is a wargames narrative, of course, but one with a bit of a difference.  Here's the link: http://valesoflyndhurst.blogspot.co.nz.  Enjoy. 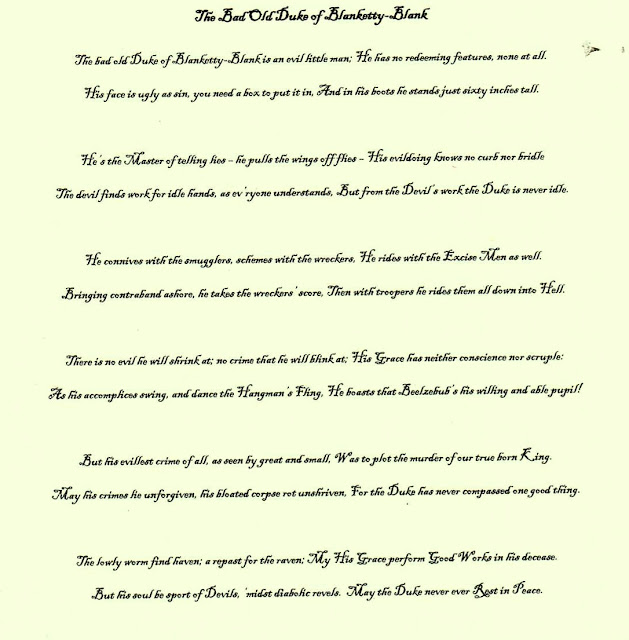 In case readers find the above a strain to read - as I do, here it is again, pasted from the original Word File.

The bad old Duke of Romney is an evil little man;
He has no redeeming features, none at all.
His face is ugly as sin, you need a box to put it in,
And in his boots he stands just sixty inches tall.

He’s the Master of telling lies – he pulls the wings off flies –
His evildoing knows no curb nor bridle
The devil finds work for idle hands, as ev’ryone understands,
But from the Devil’s work the Duke is never idle.

He connives with the smugglers, schemes with the wreckers,
He rides with the Revenue Men as well.
Bringing contraband ashore, he takes the wreckers’ score,
Then with troopers he rides them all down into Hell.

There is no evil he will shrink at; no crime that he will blink at;
His Grace has neither conscience nor scruple:
As his accomplices swing, and dance the Hangman’s Fling,
He boasts that Beelzebub’s his willing and able pupil!

But his evillest crime of all, as seen by great and small,
Was to plot the murder of our true born King.
May his crimes lie unforgiven, his bloated corpse rot unshriven,
For the Duke has never compassed one good thing.

The lowly worm find haven; a repast for the raven;
My His Grace perform Good Works in his decease.
But his soul be sport of Devils, ‘midst diabolic revels.
May the Duke never ever Rest in Peace.

This posting is also, of course, a bit of a plug for myself.  Every now and then I have posted pieces of verse by way of comment in others' blog spots.  This is usually due to something they have written or pictured that conjures up one of the Muses of verse (I prefer to think it's Calliope, but Erato sometimes chips in;  and Clio, the Muse of History, is always present) there It has occurred to me that they might get a better readership elsewhere - and of course, I want to be recognised as their author.

But if the recipients of such versifications from myself like them enough to reproduce them as part of a posting, they are welcome to do so.  I would be flattered.

Meanwhile, Barry (Marshal Noailles) and I (Archduke Piccolo) fought last weekend the action that was to decide the fate of the Ulrichstein Rebellion.  The story of that battle will follow as soon as I collate the pictures and other data.  A day or so.

Posted by Archduke Piccolo at 1:46 PM