I recently discovered on line a series of 'Comic' artworks by one J. Scott Campbell.  One of his specialities involves adult reinterpretations of Disney heroines.  Raunchy, but not altogether rude, and certainly the execution is extremely colourful and attractive.

At any rate, one of his examples - I won't reproduce it here; you can gave fun looking - led me to two things:
[a] having a crack at such drawing myself - with the monochromatic result you see infra; and
[b] to wonder if there would be much interest  in this sort of thing on this blog spot. 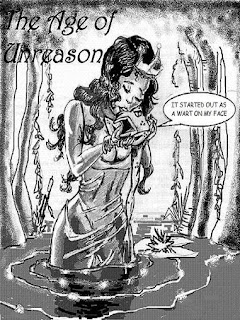 Not that I'll be doing all that much of it anyhow - I'm never quite sure about its OK-ness.   But I do seem to recall that a certain ... erm ... courtesan, the Countess Eustacia von Honigfalle, was supposed to be making an appearance in the occasional chronicles of the Age of Unreason...
Posted by Archduke Piccolo at 5:36 PM