One of the problems I've had that has become markedly more acute in the last two or three years is the lack of room properly to store and organise my war games inventory.  When I found a couple of sets of tray stacks, I reckoned I might have found at least partial solution.  The plan was to begin with the most problematic: my Napoleonic armies. 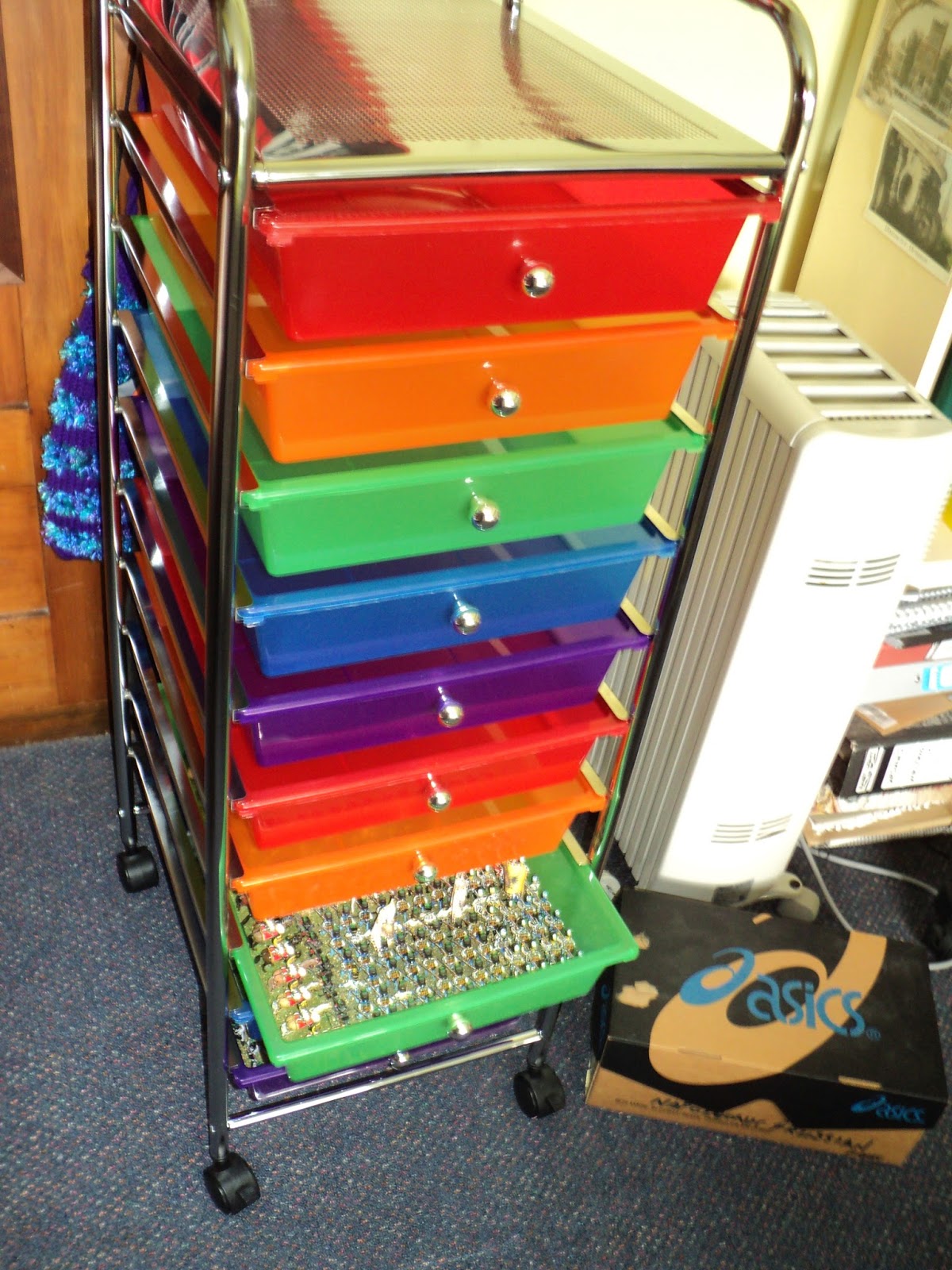 I've managed to shoehorn almost my entire Austrian Army - 550+ figures - into these three trays.  I've rather gone for compactness, which comes at a price in elegance of arrangement.

Purple box: Minifigs Grenadiers and 'Tyrolean' Jager, gunners and, to the right, 6pr guns.  The 18-figure unit at upper left are Warrior with helmets, bside which are the plastic contingents: two grenzer battalions (HaT) and the Hessen-Homberg Hussars (Italieri French Hussars painted up as Austrian).  The guns on the left are 12pr pieces scratch-built out of balsa and whatever wheels I could find, using Minifigs French 12pr gun barrels. 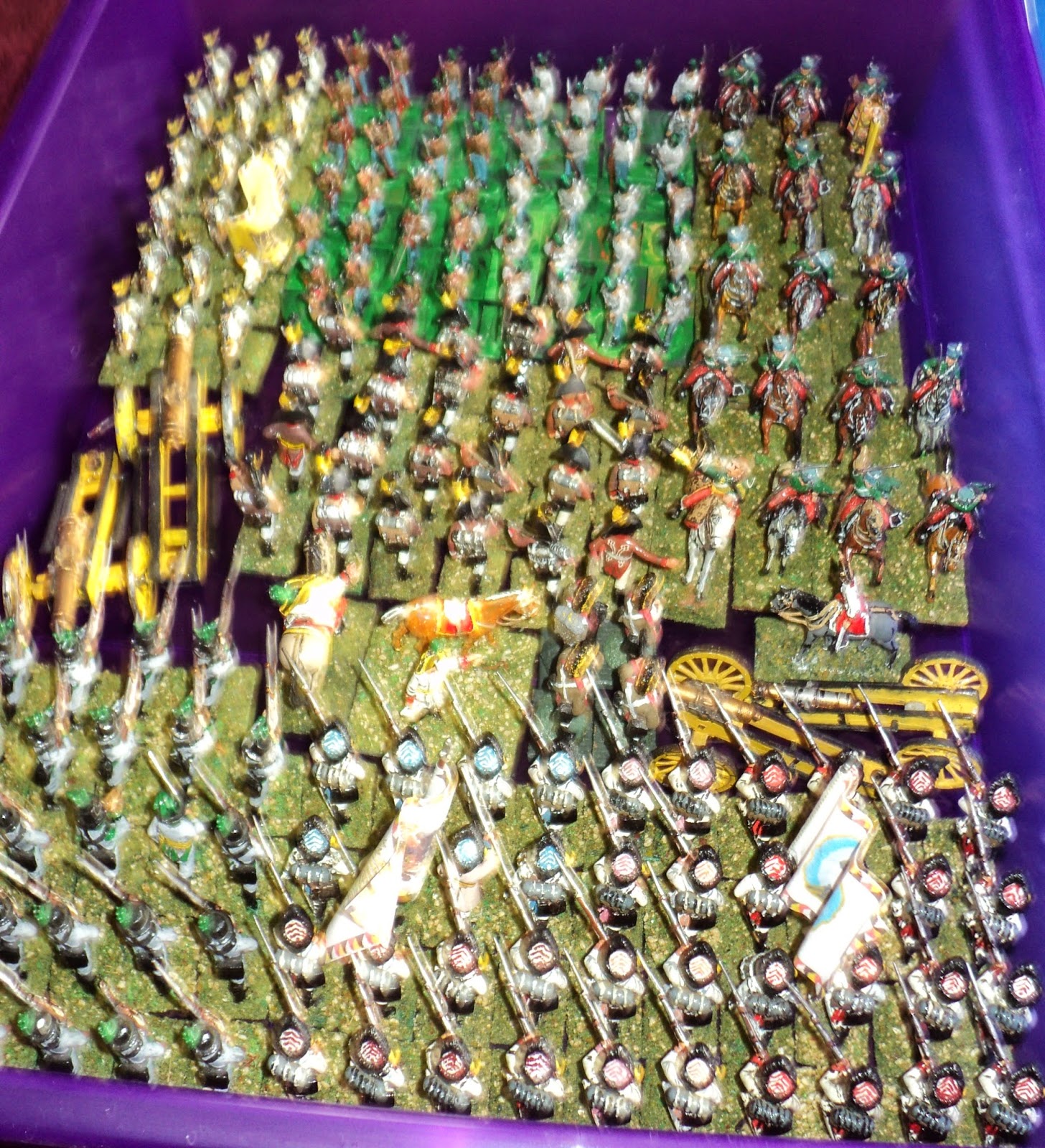 Blue box: Entirely Minifigs foot and horse, barring a small (just 8 figures) unit of chevau-legeres at centre right.  I have no idea what their manufacture is.  There seems to be a plastic mounted officer in there as well, but the rest are also Minifigs. 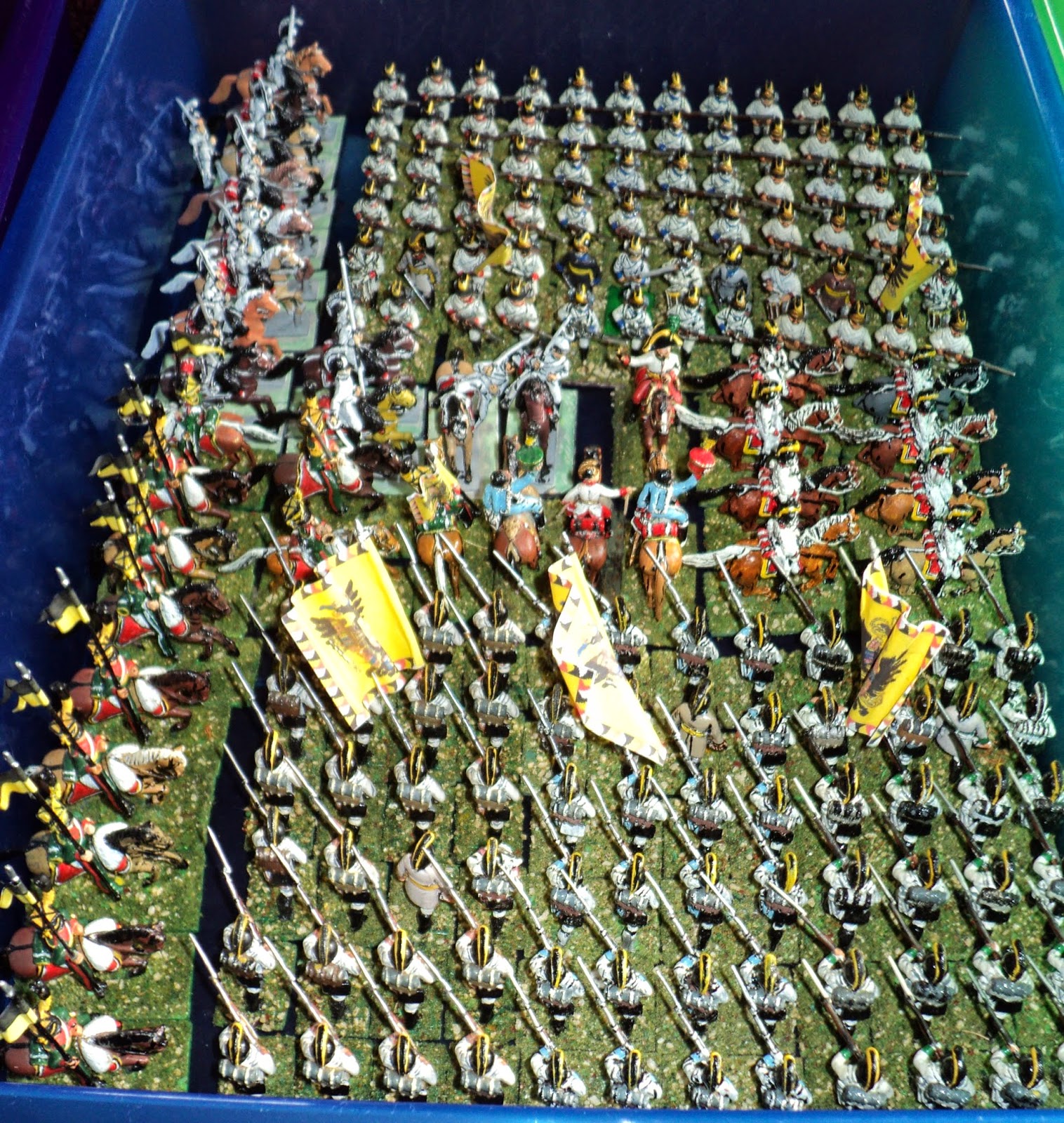 Green box: Minifigs horse and Tyrolean' Jager painted up as freikorps jager/ landwehr.  The shako hatted guys in the background are a fairly well known manufacture that I can not identify.  These have been painted up as Hungarian 2nd and 33rd Line, with the 2/33 (Hungarian) Grenadier Battalion Hahn.  In the centre are Warrior Shako hatted Line infantry and grenadiers.   Owing to the limited number of figures in the job lot I bought several years ago now, all three warrior units are below my standard 24-figure strength.  I quite like this feature of my army.  Two of my four Grenadier units are also understrength, as is the freikorps jager. The nearest infantry were rather poorly cast knock-offs that I managed at least partially to rehabilitate.  I don't know for sure, but the logo I found on some of the bases suggests the originals might have been Hinton Hunt. At that, they were supposed to be Bavarian, but I painted them up as Austrian. 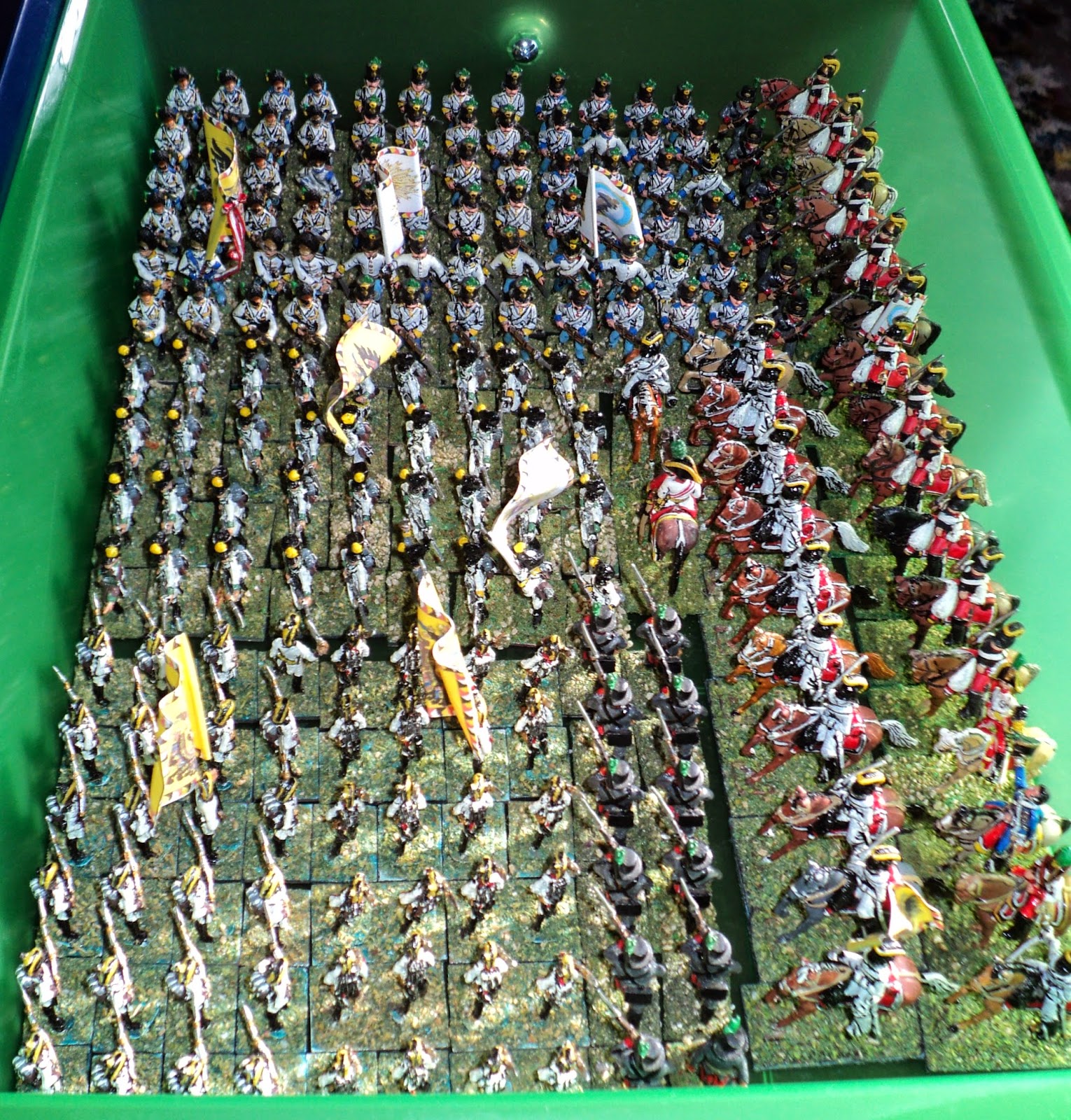 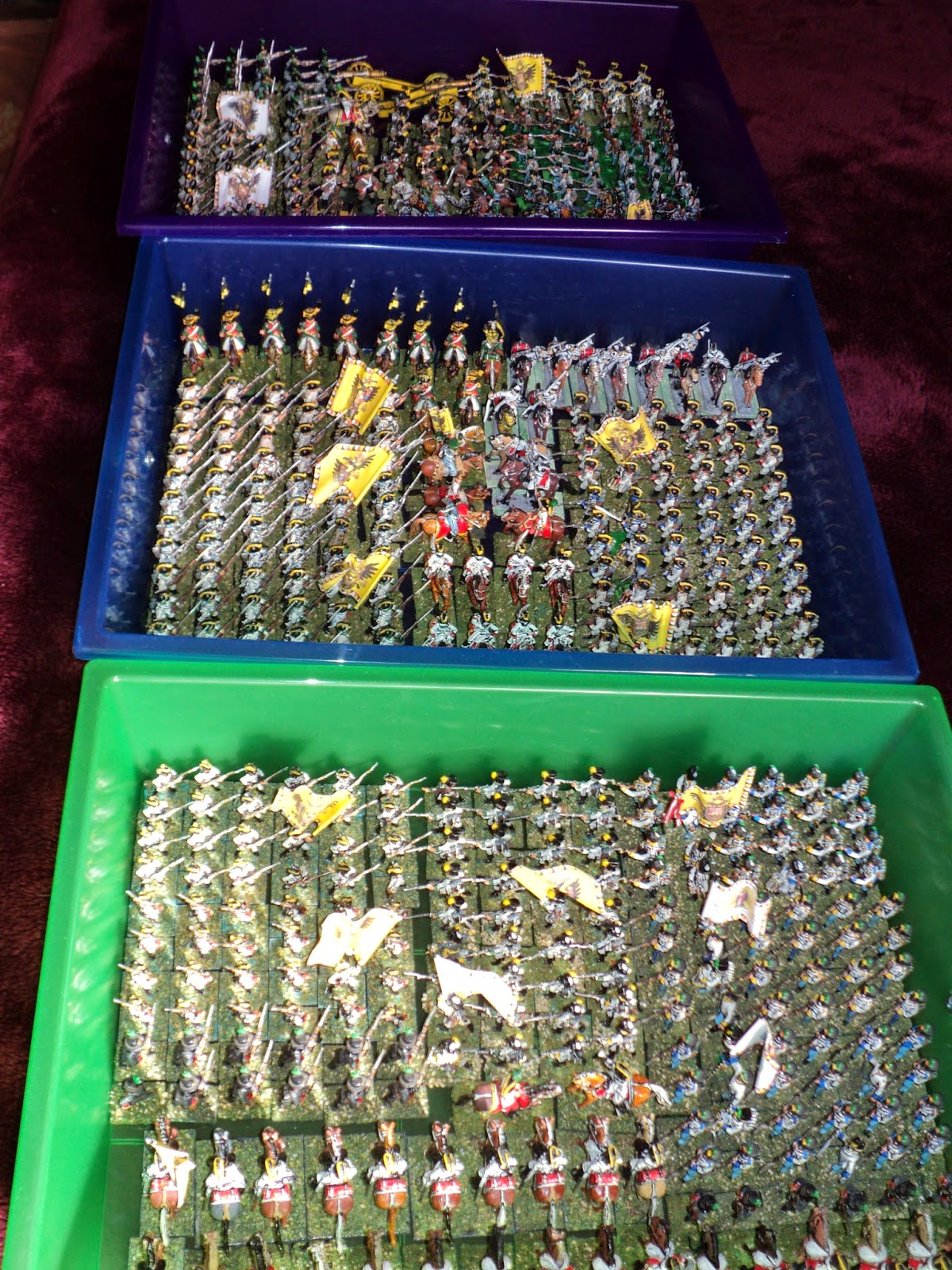 Looking along the line...  There are a few works in progress to be found among them (especially the second of my dragoon regiments), and as I still have to find accommodation for 4 more guns, I may have to overflow into a fourth box. 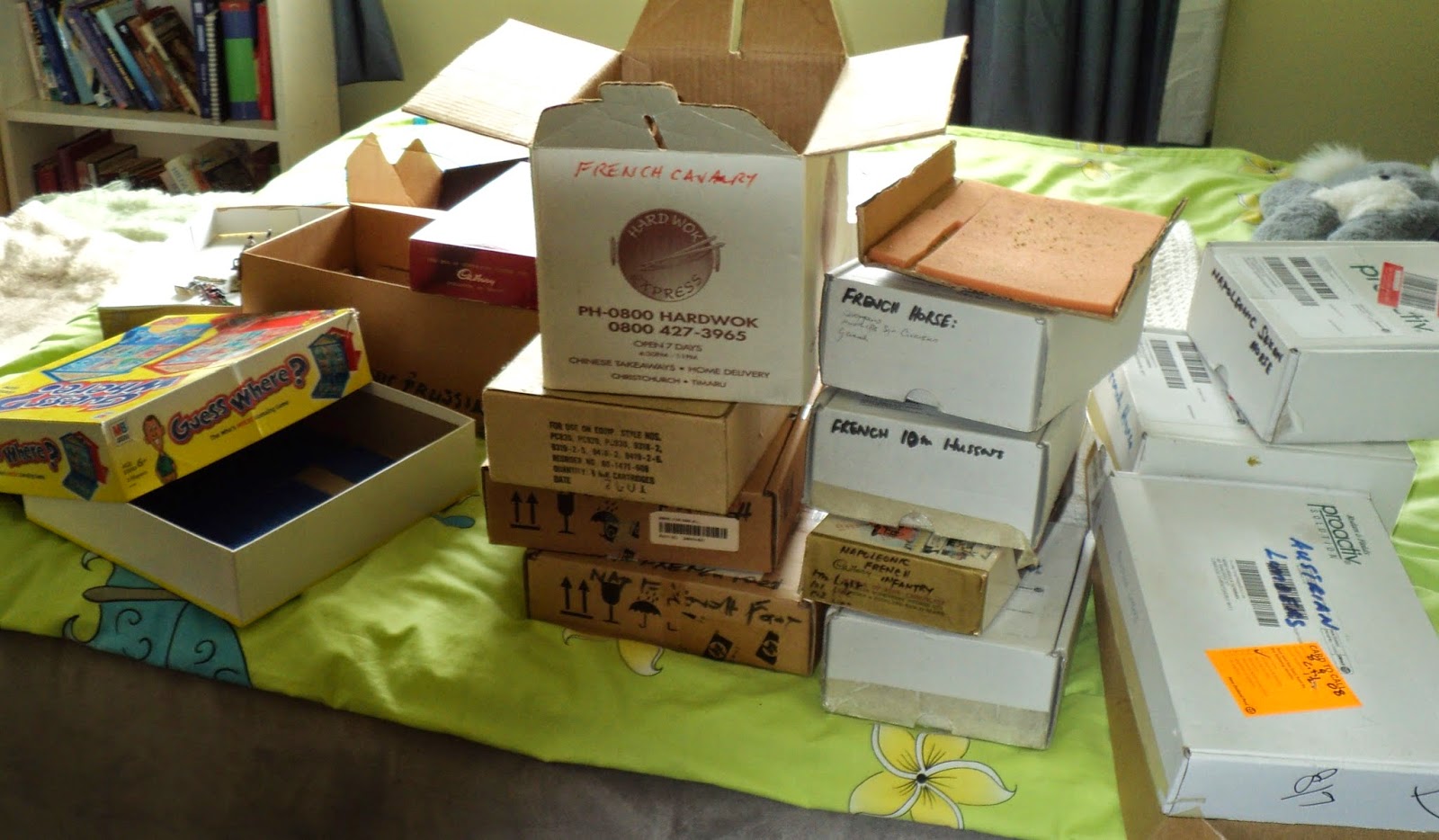 Below are the assorted boxes that have housed my French and Austrian armies until the last day or so.
And here, in a rather larger box - tray - my British army, all 200-odd figures accommodated in the one. 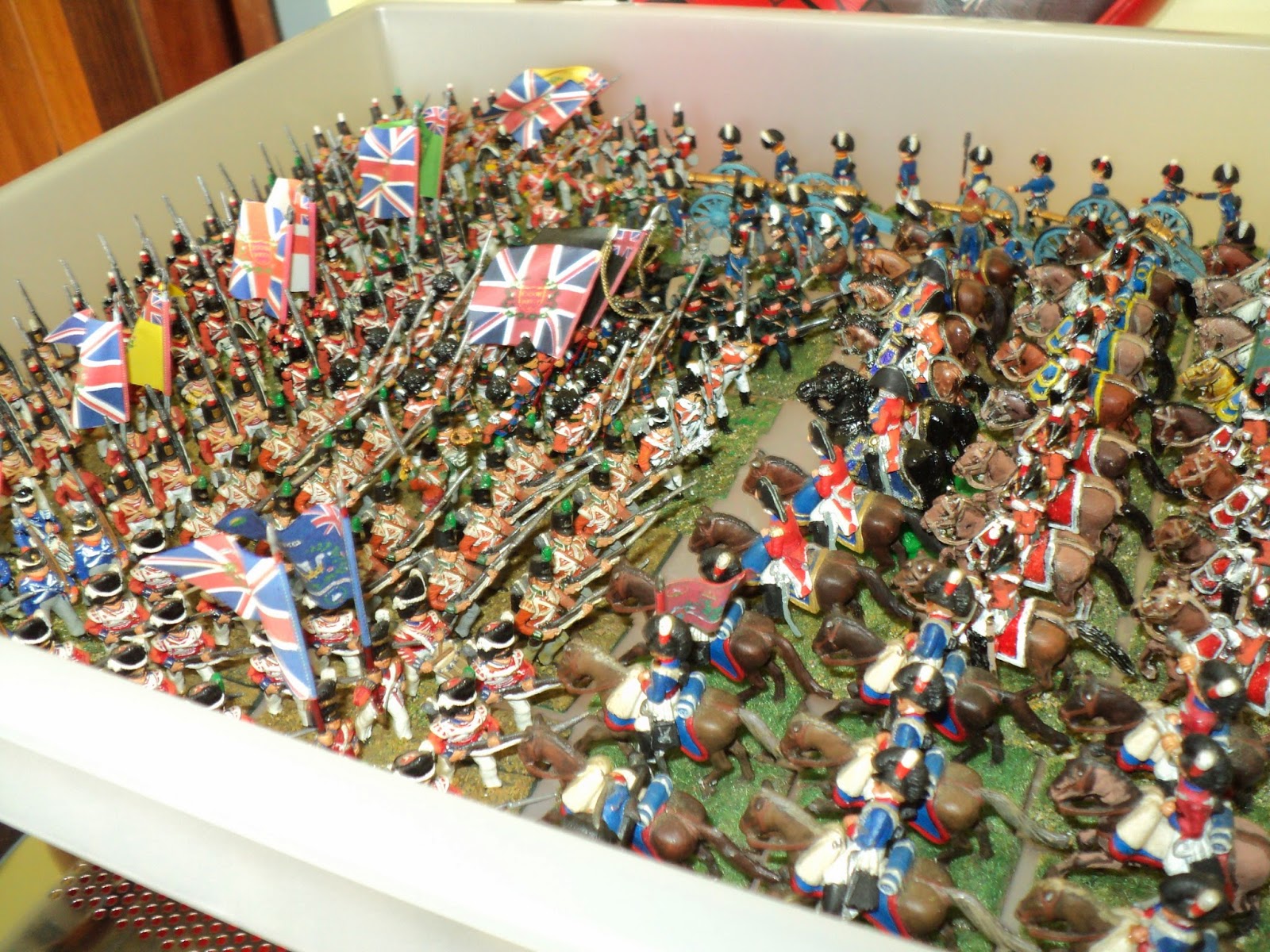 Most of my French horse: 3 Cuirassier, 2 Lancer, 3 Dragoon and 2 Chasseur regiments of 12 figures apiece.  The Chasseurs and one Dragoon Regiment are Hotspur, the Lancers are two different manufacturers, neither of which I can identify, and the rest are Minifigs. 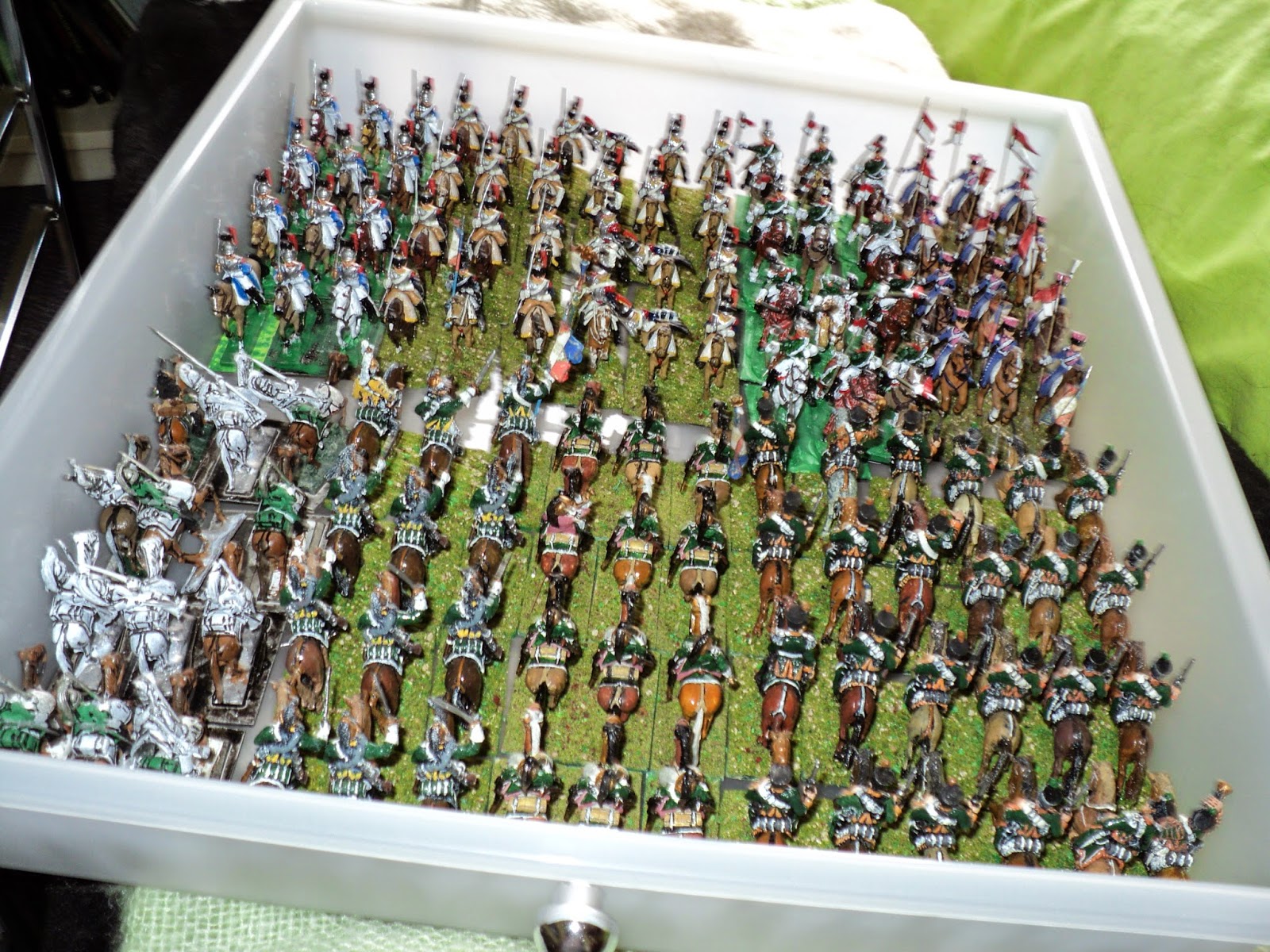 The trays in this stack are about 25-30% wider than the coloured ones.  I did have my Austrians with this lot as well, but the whole ensemble was in my view too heavy for sensible portability.  Hence the shift.  The upper boxes will house lighter figures or vehicles.  It has to be admitted, the horses make this box sag rather alarmingly... 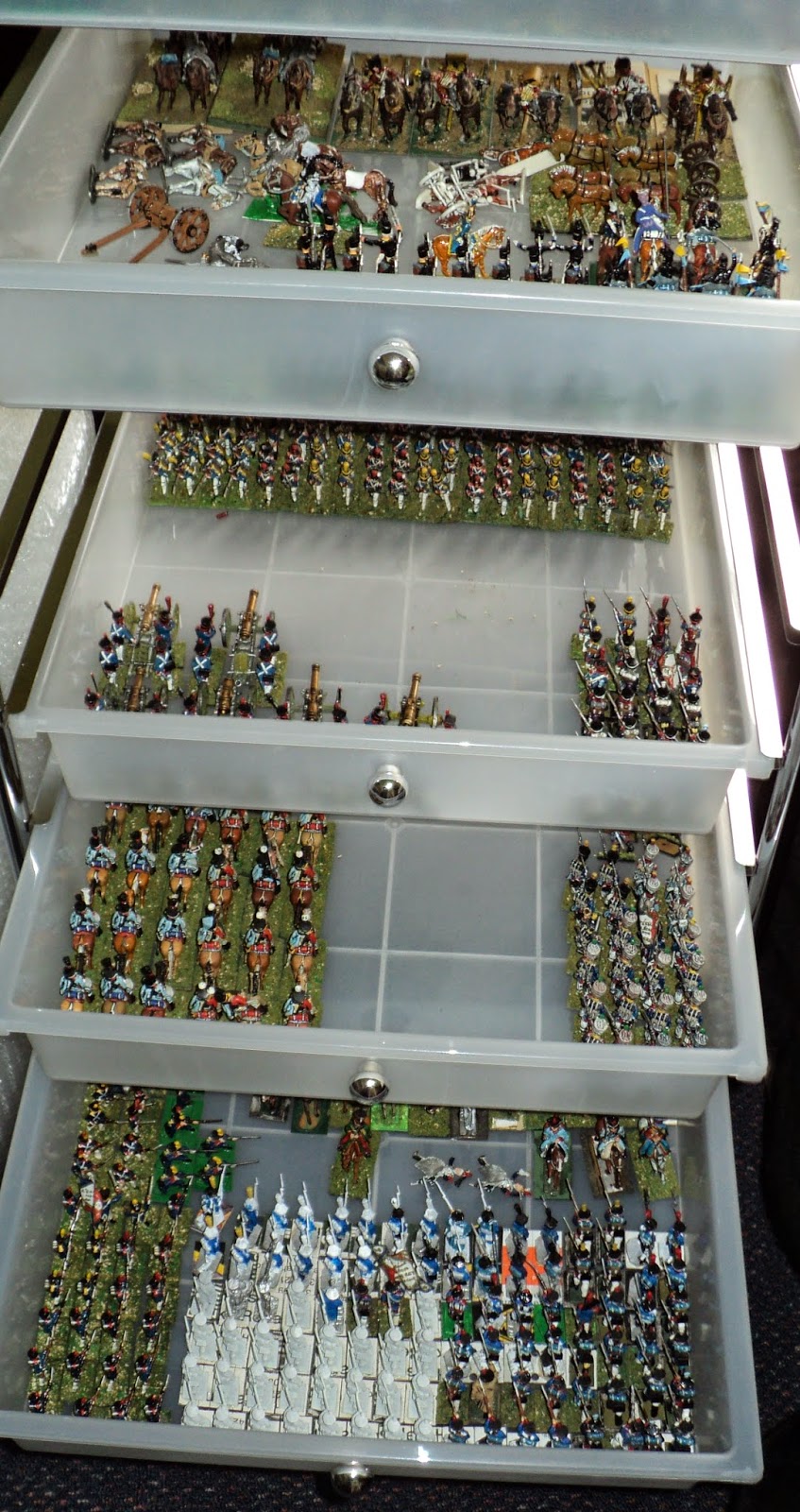 The bottom 3 trays, French foot, guns, and the two Hussar units, and somewhere in there is an orphaned 4-figure squadron of Hinchliffe Cuirassiers.  Manufactures vary: Minifigs, Front Rank, some figures that I suspect were pirated knock-offs of Minifig infantry (with their heads turned to the left by way of a pretence at originality), and others of unknown provenance (though by the style, likely the same as my Hungarian Line).  My French Army is somewhere in the region of 720-strong.
The top tray contains my entire Brunswick Corps (58 figures), and an assortment of artillery limbers.
Posted by Archduke Piccolo at 8:28 PM

Email ThisBlogThis!Share to TwitterShare to FacebookShare to Pinterest
Labels: Figures and models, Napoleonic