Recently my war game buddy 'Jacko' got himself a pack of German 8-rad armoured cars from 'Plastic Soldier'.  Three to a box, variety of types to build (SdKfz 231, 232, 233 and 263 command vehicle - seems like a good buy.

Having built his three SdKfz 231s, he has still on the sprue the tasty looking alternatives - lacking the lower hull, chassis and wheels.  Now, I have had in my inventory several old Airfix SdKfz 234/4s that I had discovered weren't what you would call 'historically accurate'.  But when 'Jacko' showed me  his models it seemed to me it might be possible to marry up the Plastic Soldier upper hulls with an Airfix bottom half/  That the one was 1:72 scale, the other 1:76, might have given pause, but  the scales were not a problem.
What you see here is the product of that effort.  Turns out that a fairish amount of haggling of the Airfix kit was needed, and a rough-as-guts job I made of it too.  The top half had some placement lugs (?) trimmed back.  The result left ugly gaps in the centre half of the hull sides that I patched up with greenstuff.  The pictures indicate some further trimming will be required to tidy that up.
The trick with an untidy bodge is to add detail,  So this command armoured car received its radio aerials, side bars and whatever that contraption is hanging off the front.  Once I've trimmed up the greenstuff packing, and given the thing an overall paint, I reckon I'll be happy enough with this chappy.  Of the other four Airfix armoured cars, one you will see was my attempt to convert one into a SdKfw231 in about 1990.  This one I might five an aerial for a SdKfz232.  The green one I'll probably keep in its unhistorical glory, a third will fetch up as a SdKfz233, and the last will be cannibalised for parts. 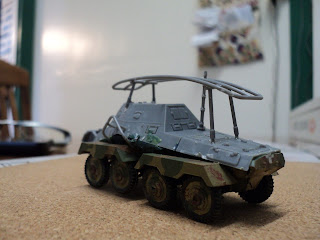 Posted by Archduke Piccolo at 8:51 PM