Last Tuesday, 'Jacko' came round for an afternoon's war gaming.  The Operation Crusader project on hold until I can read my notes again, we decided on a series of One Hour War Games from the Neil Thomas book. 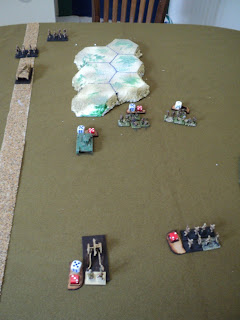 All the games were set on the Russian Front, featuring the Italians ('Jacko's' kit) on the Axis side.  The first game featured a small Russian force (my fellows) , having been stranded by the rapid advance of the Italian Army, attempting to break out.  The Italians began with an infantry company on the ridge ready to hold up the Soviets - 3 infantry and one light tank company.  Hastening down from the north was a second Italian company and an anti-tank unit (appearing at move 3), and, finally, in pursuit from behind the Russians a medium tank company and two more infantry companies (appearing at move 6).

Unfortunately we forgot the move OR fire rule for the first couple of turns, which led to the quick demise of the single blocking infantry company.  Racing onwards, the Soviets brought the second blocking force into action and eliminated it before the pursuing column could intervene effectively.  Although I lost one infantry unit, one other, together with the tanks, broke through and escaped. The chances of the fourth unit getting away remained problematical, but the victory conditions having been fulfilled, we counted it a Soviet victory. 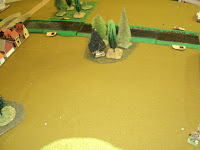 The second game also pitted four Russian units against six Italian.  This time, it was the Italians, reeling from some defeat, hoping to push through a reinforced 'partisan' roadblock to escape.  The Russians had two irregular partisan companies, one in the woods on the far side of the river, ready to cover the road or the east ford as circumstances suggested,  the other in the town.  Behind the centre woods, the Russians placed an anti-tank gun unit, and a mortar company sat on the ridge to the rear.

The Italians attacked with 3 infantry companies, a tank company, and a couple of infantry guns (counting as 'mortars' ) .  Their main effort - tanks, two infantry companies, supported by battalion guns - was launched straight up the road and into the village.  The Russians hastily brought their anti-tank weapons across to cover the bridge crossing, which, of course, left the east ford entirely undefended.

The upshot was that the lead infantry company got shot up so badly, it ceased to function as an organised body of troops.  The tanks ran the gauntlet into the town and out the other end, where they were ambushed by the anti-tank guns, which had, betimes, moved their position to a point south-east of the town, covering the exit.  In the resulting duel, the tanks were reduced to a handful, but it cost the Russians their whole battery.  Meanwhile, the flanking Italian column - one infantry company accompanied by a battery of infantry guns, had crossed the east ford, and swung right across the front of the Russian mortars.  Though Italians were to take some incoming from the mortars, they were able to effect their escape, along with the surviving armour, and the remainder of the road column.

I ought to have totted up the losses in SP.  The Russians lost their anti-tank guns, but the remaining units were still in action - or at least capable of it - at the end.  But the Italians had made off to the south with five out of six units still under command.

The final action was probably the most fun.  It was the 'Fortified Defence' scenario.  I had played it before as a Ruberia-Azuria (late 18th Century) action, about a year or so ago.  This time we tried it as a WW2 action.  The Italians were defending, with 3 infantry companies, a tank company and two infantry gun batteries, occupying two towns and a large wood.  The first wave of the Russian attack comprised four infantry, one anti-tank and one mortar companies. 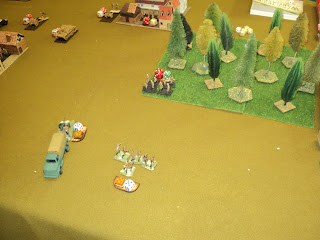 As it turned out, the Italian artillery were to be battle winners - at least to begin with.  The scenario called for the attackers, once during the action, to 'refit' - which amounted to abandoning the six units in action. and bringing in the whole six units afresh.
It was needful.  Right from the start, things went badly for the assailants.  Nr3 Infantry Coy was reduced, in a single turn, from 15 to 1 SP.  The Italian artillery set a standard right then they were to maintain for the entire action.  Nr1 Company also took a hard knock to begin with.

The first wave was enough to wipe out the garrison of Zapadnyygorod, but no more, by which time the Russians were so weakened by losses, that this success could not be exploited.  I elected to bring on the second wave, just as the last of the first wave evaporated away.
Rather than bring on the same six units, I rolled again to see what I could bring this time to the action.  Two tanks, one anti-tank and three infantry companies.  At this point, the Italian company that had been occupying the woods, was scurrying across the Russian front to reoccupy Zapadnyygorod.  That left Nr4 Russian Infantry, on the right, with no one to attack.  But the Russian medium and light tank companies, and the anti-tank were soon engaged in a brief and brisk confrontation with the Italian tanks, which had taken some loss in the earlier action.  In effect the Italian armour was outnumbered four to one, and its resistance was commensurately short.
Turning their attention to Zapadnyygorod town, the Russian infantry soon shovelled the remnants of the renewed garrison out of the place.  But the defenders, well supported by their artillery, exacted a heavy toll.  Then we turned out attention to the second town: Tsentrgrad.  For quite some time henceforth, I didn't rate our chances, so heavy were our losses (I seem to recall the Italian artillery shooting four sixes in a row, which , even if you dock a couple the time for shooting at tanks, quickly knocks a large hole in your battle strength.

But all the Russians had to do to win was to wipe out the town garrison, and send in a surviving infantry unit of their own and the battle was won.  So it proved, though it was a near run thing.  The Russians has won!
I admit that the fate of the first wave I felt certain would be shared by the second.  As it transpired, that was very nearly the case.  The Italians fought to the finish - not one of their units surviving intact - 90 Strength Points destroyed.  But there was precious little left of the Russians: 90 SP gone from the first wave and eighty from the second!

Personal news from the glazzy front:  had eyes looked at and a battery of tests on Monday last.  Booked in for cataract removal on Wednesday 17, a week and a half hence!  I am very pleased that the wait will have been so short, even 'going private'.
Posted by Archduke Piccolo at 7:15 PM