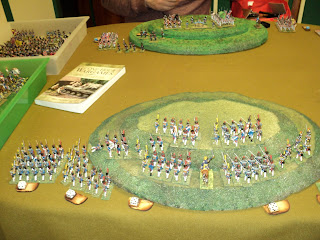 Last Tuesday evening, Paul 'Jacko' Jackson was around for our irregular war games evenings.  Like last time, we played a couple of One Hour Wargames, but this time, using some of my Napoleonic figures.  The traditional foes faced off: I had the french; 'Jacko' had the British.   Our first scenario was from Neil Thomas's book, based on the Battle of Ceresole (1544). 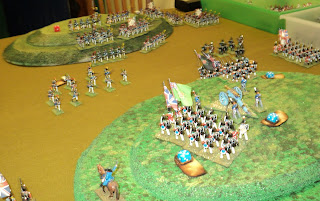 The draw for composition of our respective armies were:


The slight numerical difference between the respective infantry units was ignored. 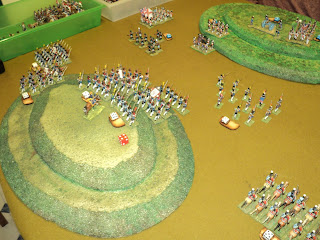 The objective was simply to drive the enemy from the field.   The British went first. 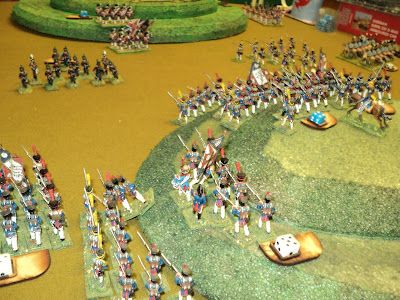 The British got the better of the first clashes.  The artillery came into action against the French infantry swarming over their hill, and after a momentary hesitation the latter pushed forward to accept the first volleys from the British rifles and muskets.  Once settled into their work, however, the French musketeers gave much the better account of themselves. 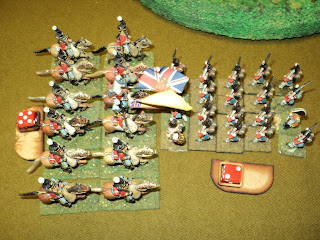 Meanwhile, the left flank redcoat unit elected to accept the cavalry charge in their column formation, rather than form square.  Good though their shooting was, the hussars exacted a heavy penalty.  To explain: all units had 15 strength points (SP) that could be lost to enemy firepower or Cavalry close assaults.  Rather than have three dice making the SP status, we used one at a time, but colour coded.  My units began with a white SP marker, went to red and finished with blue.  The British began with blue, went to red and then white, the reverse of the French,  This worked reasonably well, as I had only a limited number of red dice.  In the above picture, the hussars are down to 10SP, the British foot, down to 7SP. 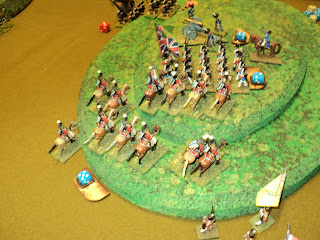 A second charge saw off that British unit, but its shooting between charges, reduced the hussars to 5SP.  Nevertheless, up the flank of the hill they rode, striking a foot unit before it had had a chance top react.  Striking the flank, but fighting uphill, the hussars inflicted a certain amount of damage (3SP, by the look) and then slid back down the slope. 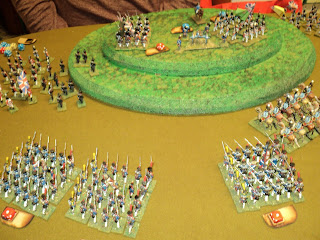 Meanwhile a stationary musketry duel had been taking place between the respective infantry units,  One French unit eventually broke, but the British rifles almost immediately afterward also found the action too hot for their liking.  Gradually the French got the upper hand, and, with the disintegration of the British right flank, felt able to close up against the British-held hill.  Gradually edging the British from it, still with four units in action (one of them still with 15SP against a rather battered  British battalion, and a diminished battery, the French were able to claim a great and glorious victory. 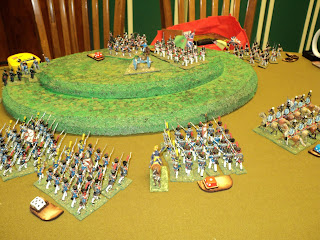 After a brief discussion about how we felt the thing went, we tried a second scenario.  This was the 'Encounter' action, each side beginning with one unit on the table, with the remaining 5 entering, one at a time, according to a die roll.  Each turn (including the first) there was a 50-50 chance of a unit arriving. 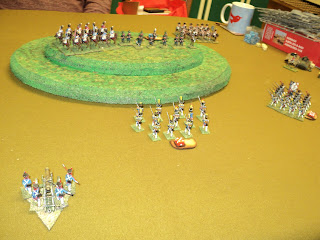 Instead of having the same composition, we again rolled for our armies.  This what we got.


Eyeing the two British cavalry units (Dragoons and Light Dragoons), I could not say I was very chuffed with what Fate has doled out to me.  Maybe luck would come on my side with the reinforcements? 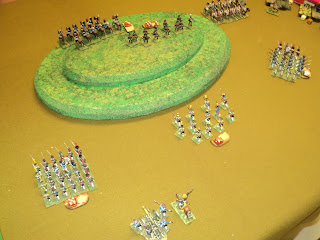 Well, it did - and then again it didn't.  We both started with a skirmisher unit - obviously forage parties looking for their next meal  'Jacko' got the first reinforcement, but gradually I caught up, and then for a brief moment had the superior numbers.  If it could last, maybe I could force that central, dominating hill and make a fight of it.  No such luck. Meanwhile, I had advanced my guns too far, whereat they came under musketry fire.  Though the resulting duel ought to have been a losing proposition for the artillery - minus 2 on the dice for shooting, and the infantry got the first shot in, to boot - the artillery did very well.  But they were not quite able to finish off their adversaries before disaster supervened. 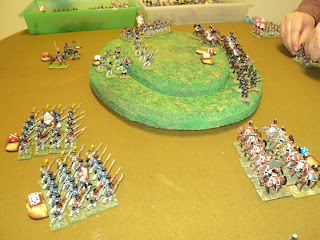 The contest for the hill hanging in the balance for a time, British reinforcements tipped the balance their way.  A French foot unit broke, along with the skirmishers not long afterward,  The light dragoons swept over the hill and rode into the French guns.  Finally they turned to face the last enemy unit still in action, apart from a skirmish unit hovering around the British left rear.  The brave French foot saw off the British horse, but, faced with three times their numbers poised to descend upon them 'like wolves upon the fold', they didn't survive long. 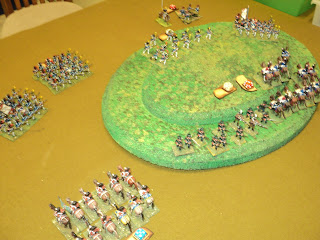 It was a decisive British victory.  It was clear the sole remaining unit - the late-arriving skirmishers - could never hope to match it against three British line infantry, two of which so far  had hardly seen any enemy to shoot at.  We called the battle right there. 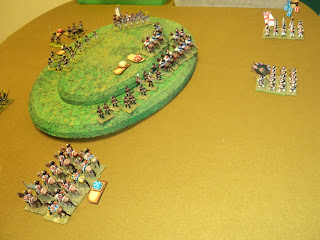 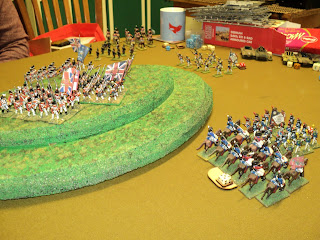 So: what did we think of One Hour Wargames for Napoleonics?  I don't reckon on their being my go-to rule st, frankly.  For may own games I still prefer my own 'each-24-figure-unit-is-a-regiment' level Corsican Ogre, and my army level Big Engagements for Small Tables (BE4ST) Napoleonics.  For one thing, there wasn't the Napoleonic 'feel'.  During the first game there was a prolonged period of static firefight in which neither side could really manoeuvre, but both clawed at each other until the gouges got deep enough to cause a break.  At that, it had more the feel of a Seven Years' War action - within the historical period of that particular rule set - but lacked something that would have identified the thing as distinctively Napoleonic.  It was not helped by our using the skirmishing units more as fast-moving irregular infantry, and in rather odd ways (it seemed to me) at that.
Where Paul and I quite like the 1HW concept for a quick WW2 game, we might use a different rule set, or maybe a 'chrome-added' 1HW Napoleonic set for future evening pick-up games.

Posted by Archduke Piccolo at 7:22 PM