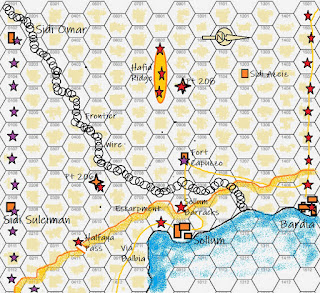 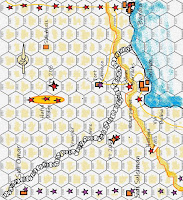 A couple of weekends back, 'Jacko' (Paul Jackson) and I fought out
a Hexblitz version of Operation Battleaxe, based on the original 1941 attempt, if not to relieve the Tobruk garrison, withal, at least to clear
the Halfaya (Hellfire) Pass of its defenders.  This action was by way of an experiment, to see how a battle over a broad stretch of country might be reduced to my 4-foot square table. 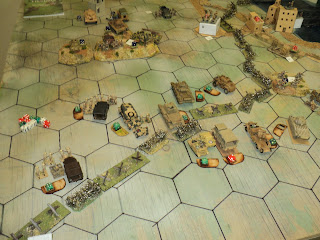 One approach to transferring the map into a field of hexes, is to draw it, very roughly, on a field of 'offset oblongs' first, and then translate into the hex-field.  I have 'on file' a blank hex-field representing my table, upon which I can draw freehand, or use some software (e.g. Microsoft 'Paint') to draw up a map.  The coloured stars on the map I'll explain later.

I based this scenario upon something similar I found in the Rommel discussion group.  I made a few changes, and the rule set I used was Bob Cordery's Hexblitz, but tailored for a large ground scale.

The action was the Eighth Army attempt to capture the Halfaya Pass and Sollum town, then to push on to take Hafid Ridge and Bardia.  Having achieved these objectives, the Commonwealth troops would have been well on the way to relieving the besieged Tobruk garrison - off the map to the north-west.

Trento Division was deployed defending the border - the Bersagliere battalion, bolstered by German antitank guns, dug in at Halfaya pass, whilst the two Sicilia battalions and the Divisional artillery were deployed around Sollum and Fort Capuzzo. The red stars on the map shows where the Axis forces could be deployed.  With some exceptions, the Axis had a free hand otherwise where things went.  The limits were:
1.  7th Bersaliere was dug in at Halfaya pass, along with Anti-tank.
2.  One Italian artillery unit had to be at Bardia.
3.  The rest of Trento Division was deployed at or between Sollum and Fort Capuzzo.
4.  One 15th Pz Div infantry battalion was dug in on Point 206
5.  The four hexes comprising Hafid Ridge and Point 208 could be occupied by elements of 15th Pz Div, one of which had to be the 8.8cm FlaK.
6.  The rest of 15th Pz Div began the action along the Via Balbia west of Bardia.
7.  Fifth Light Division began the action off-table.  From memory, they were to be brought onto the table upon a die-roll of 6 at the beginning of a turn.

Some rule modifications.  The scale of this table was somewhat larger than the standard Hexblitz scale (1:25,000) - more like 1:100,000 - each 4cm hex grid area representing 4 kilometres.  This made the 4-hex range for artillery rather on the generous side (!) but it seemed to work.

Still preferring multiple stands for battalions, I have come up with these 'stacking' conventions:
1.  If a unit is occupying a single hex, the only units that may occupy the same hex are HQ, spotter or recon units.  (I'm thinking of including light anti-tank in these).  Only one such additional unit may be stacked
2.  A unit may occupy two adjacent hexes, or three in a triangle. Only one infantry unit may do so, but other types of units - armour, artillery, recon, anti-tank etc may be 'stacked' with it, one per hex occupied.  (In this Battleaxe scenario, 7th Bersagliere occupied the Halfaya Pass hex plus an adjacent one along the escarpment.  'Stacked' with the Bersagliere, was a unit of German light anti-tank guns, defending the pass.  Note that in the scale of this game, the range of the AT guns is to adjacent hexes only).

Notes on the Frontier Wire.
1.  This counted as a minor obstacle.  A unit moving up to it had to halt, but could proceed as normal the move following.
2.  Rather than lining hex-sides, I am developing a convention - which includes streams and other types of linear obstacles, and roads as well, of arranging them within grid areas, but alongside edges or angles, still leaving most of the grid area clear, or with whatever terrain the area features.  The grid area counts as whatever terrain it holds, but obstacle counts against crossing into an adjacent grid area on the other side of it.  It also counts against any unit crossing in the opposite direction.

This seems to make it a whole lot clearer where the obstacles are and how they affect movement.

Posted by Archduke Piccolo at 3:09 PM