The following was inspired by KEV. Robertson's TOY Battleship NAVAL Rules, published on his blog spot back in August.  They really were very very simple, and, modified to a hex grid and amended to 'fit' my own toy navies, quite playable. I have posted two battles using these ideas already. 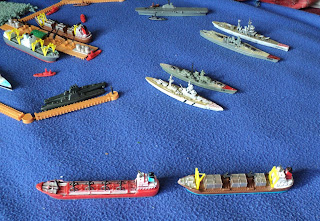 1.Though IGoUGo, in effect each side's moves and firing are treated as simultaneous.

2. The original rule set is on a 'free' (ungridded) table, with movement and ranges expressed in 1 foot increments.  I have translated 1foot into 2 hexes.  It might work better with 3 hexes to the foot, given the space.

3. Secondary armament is 'below the grain' of this rule set.


Following diagrams show the angles of fire from ships' batteries, depending upon the ships' alignment within a hex.

My thanks go to Kev Robertson for his original idea.


At some point I will follow this up with the 'Battle of Kantsi Strait', pitting 4 Yamatos against 4 Bismarcks and 2 Washingtons.

Posted by Archduke Piccolo at 12:27 PM