In the same week that the Turcowaz First Army entered Kosovo to recover the province from seizure by the Black Mountains Principality, Second Army was marching into the neighbouring Vardar province. Having reason to apprehend an invasion by the Bejelan armies, Ali Riza Pasha, the Army commander, took with him his whole force. 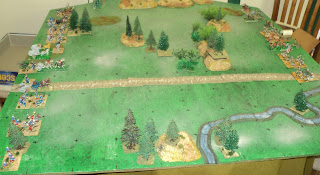 Aware of that their invasion had been anticipated, the Bejelans might have hesitated to carry it through at once. Informers indicated that the vast Turcowaz IInd Army might be a match for both Bejelan armies combined (see army lists). Upon consideration, the Bejelan government determined that avoiding action now might well lead to recriminations later, especially if their nominal allies had to bear the burden of the fighting.

Both armies marched into Vardar, looking for trouble, Ist Army, under the formidable (i.e. 'Good') General Petar Bojovic, at the northern end: IInd Army at the southern. Marching up from the south, the Turcowaz troops might have been expected to encounter IInd Bejelan first. The two armies missed each other - possibly to the relief of General Stepan Stepanovic commanding the latter - as the Turcowaz marched north. Instead they ran into Ist Bejelan Army at a most desolate spot amidst mountainous country, far from any habitation.

The risky invasion by the Bejelan Armies I had already determined on, but which the Turcowaz had first to face was determined by a die roll. As it seemed more likely that the Turcowaz Second Army would find IInd Bejelan, I biased the roll: 1-4 IInd Army; 5-6: Ist Army. I rolled a '5'. The map was determined as before, using the Colonial Portable Wargame modified for my slightly larger grid area, and the country round about was again deemed 'mountainous'. 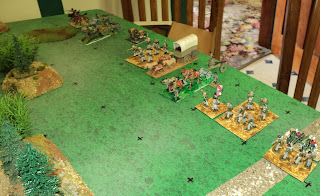 'Wicked country to fight in', murmured Ali Riza Pasha to his staff, as the two armies met in what amounted to an encounter battle.  Several small but steep rocky mountains presented impenetrable obstacles, interspersed with only slightly less 'permeable' tracts of marshland and forest.  In the pictures following, the elevated terrain features crowned with trees were classed as 'mountains', precipitous towers of rock that were known occasionally to form the foundations of inaccessible monasteries. 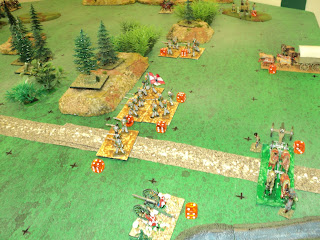 Now, it is true that the Ist Bejelan Army, the larger of the two, was still badly outnumbered by their powerful opponents.  But they did have a couple of advantages.  Ali Riza Pasha classed as a 'poor' commander, Petar Bojovic was classed as 'good'.  In the initiative rolls, not only was the Turcowaz down one on the median, but down one on the initiative roll as well.  The Bejelan commander was correspondingly 'up one' on both die rolls.  On a couple of occasions, a 5-4 roll was thus converted to a 4-5, but the Turcowaz still managed to win a few initiative rolls during the course of the battle.  The other advantage the Bejelans had: machineguns, in the shape of a unit of Maxim guns. 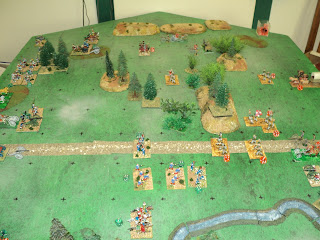 Limited as his capacity was, Ali Riza Pasha determined upon a thrust by his most trusted troops, straight up the highway - remarkably free of bends and turns as it ran up the narrow but flat valley floor. In the bottleneck between a mountain ridge and a loop in a small stream, the heavy fighting developed quickly. 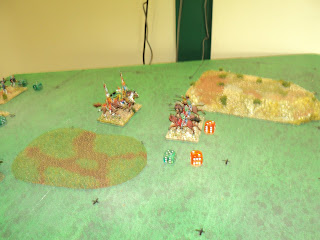 On the other flank, the Bejelans were able to filter through the thick terrain cavalry and field artillery, along with 2nd and 4th Rifle Regiments. Espying Turcowaz Sipahis in the distance, Bejelan cavalry incontinently charged, were met by lance and scimitar, and promptly fled back to the gun line. For the moment the projected left hook had been stalled. 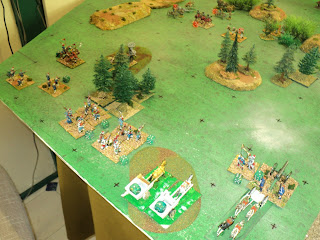 The heavy fighting on the road proved costly to both sides.  3rd, 4th and 16th Turcowaz Infantry all took damaging hits; as did 1st and 3rd Bejelan Rifles.  The former was forced back behind the Maxim guns. Generel Bojovic took some risk joining the fight to encourage his men, but losses quickly mounted to 6 Turcowaz and 4 Bejelan Strength Points (SPs).  It was not long before the damage to the Turcowaz infantry compelled them to break off their offensive, but the Bejelans were too knocked about to follow up effectively.  This was not helped by the destruction of the Maxim guns from rifle and artillery fire. 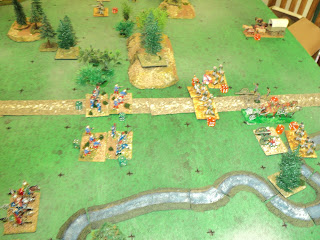 The Bejelan's enjoyed a major success on the western flank when effective counter-battery silenced the Turcowaz field guns emplaced upon some rising ground. The situation seemed to promise interesting possibilities on this flank. Unfortunately, they proved difficult to realise. 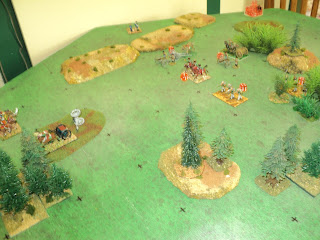 Fourth Rifles attempted to flank the Turcowaz infantry astride the road. Their flank attack failed to move 16th Infantry, and within a short while were themselves struck in the flank by the albeit depleted but veteran 2nd Infantry. With little effected, 4th Rifles fell back through the woods. 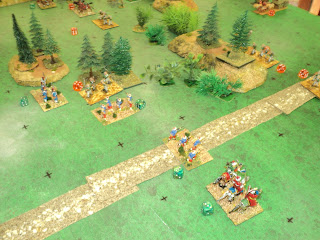 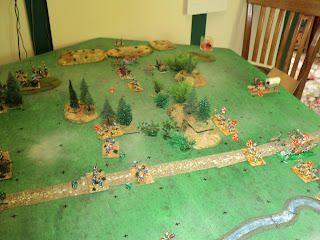 This really was the signal, though not yet apparent, of a growing general withdrawal of the Bejelan army.  The Turcowaz 2nd Sipahi felt emboldened by Bejelan slowness on this flank to charge the lead field battery.  Inflicting little damage, the attacking horse fell back. 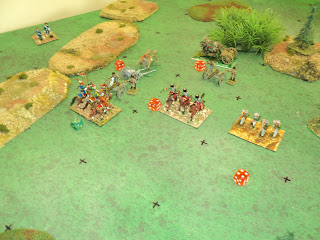 On the right, the Turcowaz had fallen well back out of rifle range, but maintained a bold enough front, daring the enemy to come on. Badly depleted themselves, the Bejelans declined the invitation. Losses at about this point amounted to about 7SP on the Bejelan side - including the machineguns. Turcowaz losses had been so far the heavier, 9 on the right wing, plus 2 more from the field artillery on the other flank. But the Bejelan offensive on the west flank fared little better than  the Turcowaz on the east. It was not so very long before the Bejelans lost their 8th SP, which took it past its exhaustion point. 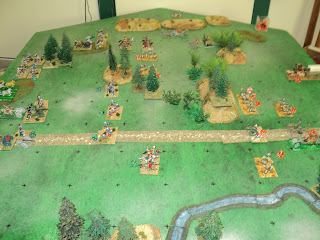 The to-and-fro cavalry fight came to an end with both sides broken and spent. Coming under effective rifle fire from 10th Infantry, the lead Bejelan battery was wiped out just as it was limbering up to move off. The inactive Bashi-bazouks were stirring themselves into motion, a force, whatever their quality, that were a match for depleted Bejelan units. With one last rearguard action from 5th Rifles, the Bejelan Army effected a well executed, unmolested retreat. 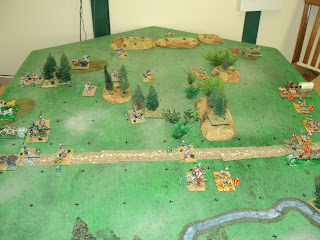 Another victory for Turcowaz arms! But this one had been dearly bought - especially among his veteran infantry. Outnumbered two to one in the infantry and cavalry arms, the Bejelan Army had acquitted itself well in giving as good as it got.
Here's the breakdown of losses:
Turcowaz: 16SP total.
10 infantry; 6 from the two veteran units.
4 cavalry; 3 from the trained unit
2 artillery.
Bejela: 15SP total.
8 infantry; 3 veteran, 3 trained, 2 green.
2 machine guns
3 cavalry
2 artillery.

The Ist Army driven back across the border with that country, there remained the question of the other Bejelan army at large in Vardar, possibly even now athwart the Second Army's line of communication.
Now, the question arises whether the Turcowaz army gets to fight both Bejelan Armies in the same province in the same strategic turn. I had planned it that way, but now I'm thinking (a) it isn't really realistic, (b) it makes things strategically a lot more ... erm ... interesting (especially for the Turcowaz!) and (c) it rather makes the two-pronged invasion by Bejela the more sensible. However, as it seemed to be a kind of option, I decided the thing by a die roll.  The outcome will be discussed next time.
Posted by Archduke Piccolo at 10:24 PM