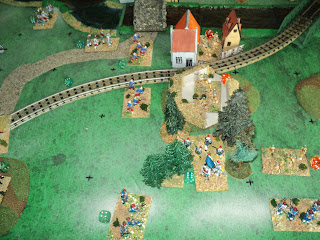 Losses had been heavy on both sides, the Turcowaz having lost 8 SPs, the Mountaineers losing 6, including a loss to the Royal Guard in the town. Then the 'score' was suddenly equalised when the Turcowaz medium artillery's counter-battery fire scored two successive direct hits that silenced the enemy mountain guns. Dusting himself off, General Zorghucz joined the Royal Guard in the town, where he began directing the defence.
Until now, the artillery fire on both sides had been indifferently effective, but now the Turcowaz gunners hit their straps. The Mountain guns silenced, medium and field batteries turned their attention upon Zapadno, with devastating effect (both scored sixes, and both hits inflicted losses).
Possibly now was the time for the Black Mountain Army to pull out, whilst the pulling out was good. But the General elected to remain and to continue to engage the Turcowaz across the river.
This was something of a rearguard action, as the main body streamed towards the railway bridge crossing, followed in rather lackadaisical fashion by Turcowaz infantry. The Mountain Army were lucky enough to get a rare 'win' of the initiative, hereabouts, which helped them distance themselves - a little - from pursuit.  The retreat was not helped by the bridge being set at a diagonal, which meant the crossing was slower than it might have been (an therefore giving a more 'realistic' effect of retiring through a narrow defile).
At this moment, General Zorghucz's luck ran out. Already he had survived four salvoes from Turcowaz artillery (two whilst with his guns, and the two the previous turn). Not this time. Another stonk from Turcowaz artillery caused the disintegration not only of the Royal Guard, but also a masonry wall under which the good general was standing. The collapsing rubble occasioned his demise.  In rolling for his fate, he threw double-sixes!

There was nothing for it, but for the remnants of the Black Mountain Army to retreat. The disaster to the Royal Guard and their general pushed the army well beyond its exhaustion point. The damage to their adversaries had barely taken then halfway.
This was an undoubted Turcowaz victory, and, in the event, a fairly easy one. But they could count themselves lucky their own losses were not worse:
Turcowaz losses (E.P. 17SP):
Infantry: 9 SPs
Black Mountain losses (E.P. 9SP):
Infantry: 10 SP
Artillery: 2 SP
Command: 6 SP.
Comments on the conduct of this campaign:
1.  Losses to the armies may be partially replaced, on a pro rata basis by arm, and generals replaced for free, dicing for their quality: 1-3 'Poor' (inexperienced), 4-5 'Average', 6 'Good'.
2.  In this battle, the Turcowaz won a good two-thirds of the initiative rolls over maybe ten or a dozen turns.  Now, Nazim Pasha was rated 'poor' and General Zorghucz 'average'. It occurred to me that perhaps not only should this affect the activation rolls, but the initiative roll as well, 'poor' generals taking a -1, 'good' generals a +1 on the pip score. This was tried out in the next battle, fought in the nearby Vardar Province...

3.  I am starting to wonder if maybe I have included too much artillery with these armies....
To be continued.
Posted by Archduke Piccolo at 6:34 PM