Rulers, tape measures, six-sided dice (D6), models or ship 'profiles' in scale from 1:300 to 1:700, protractor with 30, 45 and 60degrees marked, ship stat sheets, movement markers.
Movement markers are square chits with a number on them.  The number signifies nominal speed, which may be modified by the current, or if the ship is reversing.  Placed immediately behind the vessel going forward, the chit is placed at an angle to indicate intention to turn.  Placed in front of the vessel indicates movement astern.  (Note, an arrow on the chit probably makes the intention clearer).

Critical Hits
Roll 2xd6 and add the scores Critical damage is caused according to the following scores.

2 = Freak shot penetrate magazine; vessel blows up and sinks immediately.
3 = Helmsman, Pilot or Ship Captain killed; vessel continues on present course, with no turning (even if ordered) for one whole move (Note - if this happens in the second half of a turning move, then the vessel carries on its new course).
4 = Vessel holed below the waterline and takes on a list or goes down by the bows or stern depending upon the direction of the incoming.

If listing, opposite side guns can not fire; if down by the bows or stern, the other end guns may not fire.  Monitors can not fire towards the 'up' side or end.

A second such critical hit does not alter the direction of tilt, but does add to loss of speed
5 = Paddlewheel or screw jammed with debris.  Vessel slows to a halt (at 4 knots per turn deceleration).  Roll 1xD6 for number of turns to clear it.  If a 1 is rolled, then the debris is cleared at the end of the turn the damage was received.
6 = Smokestack damaged - lose 2 knots from top speed.  Ship suffers -1 on further gunnery rolls (smoke everywhere!).  Further such hits reduce speed by -2 knots, but can not reduce ship's speed to below 3 knots.
7 = Single casemate gunport damaged and won't open, and gun is left out of action.  1xD6 moves to free it; the gun remaining out of action for that time.  Foe barbette or unprotected guns, lose one, reducing gunnery by one gun.
8 = Steam pipes damaged, loss of pressure.  Acceleration and deceleration reduced to 1 knot per turn.
9 = Same as 4.
10 = Steering damaged - vessel continues on same heading until repairs effected after 1xD6 moves.
11 = FIRE! - Roll 1xD6 to determine number of attempts to put it out.  One attempt is allowed per turn, a score of 6 required if afloat; 5 or 6 if aground or beached.  If the vessel is still on fire after the allowed number of attempts to extinguish, the crew abandon ship, which is left to drift and burn out.  Upon a second such critical hit whilst on fire, the crew will abandon ship immediately.
12 = Boiler holed, vessel fills with steam, and drifts to a halt (at 4 knots the turn).  Crew abandons ship on a D6 roll of 1 or 2.  Otherwise the vessel acts as a floating battery with -1 on gunnery rolls.
Musketry and Grapeshot
Firing on Shore battery:
7. Ramming 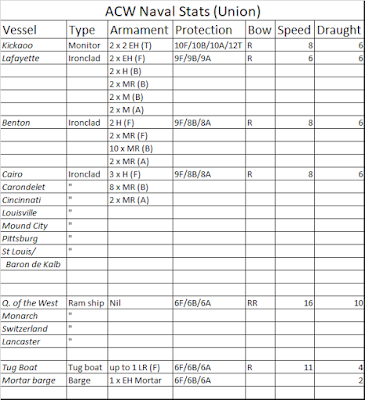 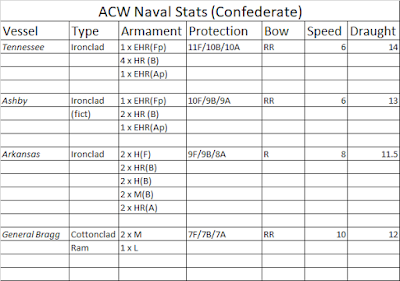 Posted by Archduke Piccolo at 2:40 PM

Email ThisBlogThis!Share to TwitterShare to FacebookShare to Pinterest
Labels: 19th Century, ACW, Naval, The War Between the States