The two Turcowaz-Chervenia battles of the fourth week of the war having gone rather in favour of the latter, were not by any means the end of all the action.  Later the same week, 29th October, witnessed the clash between the Turcowaz Second Army and the Hellenic. Threatened with being isolated from their homeland, and cut off somewhere near Salonika, Crown Prince Constantine ordered a hasty retreat.  The road travelled westward, before the routes south into the safety of Thessaly might be reached. Marching down from the north, the army of Ali Riza Pasha was heading for the market village of Kozani, through or around which the Hellenic army had to pass to reach the south roads.
The map shows the general situation, both sides beginning off table, and entering by road, 4 stands maximum per turn, though the Commanding generals could accompany any stand without adding to the count. The Hellenic objective was to secure their safe withdrawal by one or both south roads. The nearer presented something of a bottleneck; the other a long way to reach.
This time, I didn't use Bob Cordery's random terrain generator, but used Google Maps to find a  more or less suitable battlefield, which, with considerable modification, became the map and table-top you see here.
The Hellenic Army might well have been anxious for their fate, for theirs was the smaller army.  It comprised: 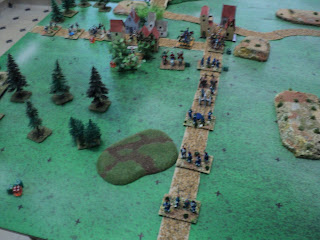 Totals:
15 Units (Median = 8-1(poor general) = 7.
44 Strength Points (44,000 troops), exhaustion point -15SP.
The race for the town proved something of a dead heat, the action opening with the leading cavalry elements of both armies racing for the vital road nexus at Kozani village. In preparation for this action I had decided upon both sides beginning the action more or less equidistant from the nearest road junction, and a predetermined 'order of march'.
The head of the Hellenic column comprised 1st Cavalry - 11th Infantry - 12th Infantry - Machine guns.

The first clashes between the cavalries of both armies occurred in the fields semi-enclosed by the villages, the olive grove, and the small eminence northwest of Kozani. About to win the race for that village, 2nd Turcowaz Cavalry were struck in flank by the Hellenic horse. 4th cavalry came to the rescue, but in turn came under close combat from infantry filtering through the olive grove. Eleventh Hellenic infantry were able under cover of the indecisive scrimmage that was developing, to skirt around the fighting and seize the unoccupied village.
Both sides continued to feed troops into the action. Hellenic machine guns dropped into action between the orchard and the large forest to the north from which position they brought the north road under fire. The quick Turcowaz response brought 3rd Turcowaz Infantry into a direct close-quarter attack upon the machine guns, with 21st Infantry penetrating the forest to flank the MG line. The fury of the veteran Turcowaz drove back the machine guns, which thenceforth were scarcely to be allowed to bring their effective firepower to bear.
As the Turcowaz infantry arrived, they were fed into the fight between the villages, the cavalry - with some difficulty - gradually withdrawn in order to cover the road west. Thereto was the 3rd Field Artillery directed, the other guns brought up against the Kozani village. For their part, the Crown Prince finding the road blocked by the ongoing close quarter fighting, directed the oncoming reinforcements around the south of Drepana village and the marshy ground alongside it, over the hill covering the bridge, and onward. The field artillery he ordered across the bridge, to set up a battery position alongside the road on the southern bank.  The mountain artillery he emplaced on the hill to cover the approaches.  From there the guns were to give some support to the fight about Drepana.

The Crown Prince himself accompanied the green 21st Infantry to secure the west road.  By this time, the Turcowaz had, perhaps ephemerally, severed the road west.  Secord Cavalry had swung in behind Kozani, isolating the depleted village garrison, still grimly hanging tough. Perhaps encouraged by the presence of the popular Crown Prince, 21st Infantry swept aside the Turcowaz horse. But then they found in front of them that a battalion of enemy guns forming up in battery astride the road.

All along the front, the outnumbered Hellenic troops - horse, foot and guns - were hard pressed and, if they weren't being pushed back, they were barely holding. The bridge at least was reasonably secure, but not a practical crossing whilst Turcowaz pressure continued so fiercely. The Ali Riza Pasha was as eager to close off the west road as the Crown Prince was to clear it. Artillery was not the ideal road block, but for a time it proved difficult to bring up a reliable support.
With mounting losses, the fighting grew more desperate around Drepana village, especially for the Hellenic troops. It was scarcely possible for them to break off the action, for they would have had 'to go the long way round', to reach even the bridge road. But they could never quite drive off the enemy's close assaults to give themselves the space to withdraw more or less safely. The Turcowaz seemed willing to take heavy losses to inflict as much hurt.
For all that, the tail of the Hellenic column - the transport vehicles - were arriving safely enough. Although the veteran Turcowaz infantry had driven the machine gunners well beyond Drepana, the latter were still putting up enough of a fight to cover the vulnerable carts and wagons. The bridge hill occupied by artillery, the whole transport column had to pass through Drepana, swing south onto the bridge road, then away.  That meant that 12th Infantry remained locked into defending the olive orchard flanking the village to secure the passage of the last of the Hellenic column.
Such was the general situation around the villages as Crown Prince Constantine led 21st Infantry, the 22nd some distance behind, to clear the road west of the Turcowaz artillery, then still struggling to deploy astride it. Not content with shooting them up whilst unlimbering, Constantine led a determined charge that drove back the gunners, risking a flanking counter-attack from Turcowaz 4th Cavalry, none too distant from the road, and enemy artillery on the hill, whose attention for the moment was focused upon Kozani.
The attack was not immediately successful, the enemy artillery refusing to be driven pell-mell back along the road.  Although facing likely annihilation, the gunners were prepared to die hard.  The road west had still to be cleared.  Would the Crown Prince get the chance?
No.  Turcowaz 4th Cavalry was not about to pass up the opportunity to counterattack enemy infantry in flank whilst the latter were heavily and closely engaged to their front.  In the following pictures, the resulting clash might be seen in the far distance, the outcome of which will be related in due course.

Meanwhile the Hellenic troops north of Drepana had become horribly depleted, yet the pressure from the enemy remained unremitting. Though the supporting artillery was having some effect, the collapse in this sector remained likely, and imminent.
The Kozani garrison was still barely holding, and under its cover Hellenic foot and horse were hurrying up, hoping to support, or, better yet, to join the Crown Prince's counter-attack. So far had the battle advanced, and yet the issue was still in doubt. But though the last of the Hellenic column was entering the Drepana village, no one had yet seen the end of the Turcowaz stream from the north.
Upon the outcome of the battle for the west road it seemed the fate of the Hellenic Army rested. Just as the the Turcowaz artillery were finally pushed back down the road, the cavalry tore into the Hellenic flank. In the melee, the infantry took heavy losses. The Crown Prince was unhorsed and wounded (2SP lost), and the whole regiment driven up the steep ridge beside the road.
Yet that seemed to leave the situation on this part of the word somewhat problematical. The Hellenic Army still retained the reserves (a horse and a foot regiment, however depleted) to attempt to force open the roadway. Elsewhere, the exiguous remains of the Hellenic infantry were still barely keeping the road open, just as the final Turcowaz reinforcements arrived onto the field. A desperate counter-attack by 1st Hellenic Infantry threw back the Turcowaz from before Kozani. This local success secured the passage of the vital transports. The Turcowaz infantry had been driven back from the orchard as well. Everywhere, the stout Hellenic defence were - just - keeping the Turcowaz at bay.
Suddenly, and at last, the machine gunners' resistance collapsed. Their adversaries had not got off unscathed, half their strength scattered over the green sward, and the transport columns, passing through Drepana, though not yet quite safe, were very close to escaping.
Retracing their steps, 3rd Infantry attacked the orchard from the east, just as two other Turcowaz infantry regiments launched close assaults from west and north. Forced out from the trees, the defenders ran into the Turcowaz veterans. Few were the Hellenic survivors remaining to surrender.
The capture of the orchard was swiftly followed by an attack upon Drepana village itself. Too late! The Hellenic transport columns had passed through betimes, and would shortly be crossing the bridge onto the road south. Yet the late frenzy of action all along the front, together with the injury to the Crown Prince, knocked the stuffing out of the Hellenic Army. Direct counter-attack impossible, it remained for the army to try to hold the roads open and effect their retreat.
The Turcowaz let them go. The Hellenic troops having given a fine account of themselves - an enemy worthy of his steel, and his army itself close to exhaustion, Ali Riza Pasha satisfied himself of a fine victory. For their part, The Hellenic Army could at least count upon a close escape.
Losses were heavy on both sides 14SP (7000 casualties) on the Turcowaz side - one short of its exhaustion point; the Hellenic Army 16SP (8000), including Crown Prince Constantine, wounded in action trying to clear the road west from Kozani. In calling the battle, I figured on the road west being reachable by passing south of the steep ridge, but hazardous on account to the Turcowaz artillery astride the road.  However, there would have been nothing to prevent the infantry bringing fire upon them from the ridge. All the same, that the river bridge was open ought probably have been enough to secure the Hellenic army's retreat south... and hence a claim, however tenuous, to the strategic victory.

In developing this scenario, I was a little concerned about play balance, but it turned out a very near run thing. It was one of those actions in which even after reaching its exhaustion point, the weaker army might get off with a measure of success, especially if it fought the enemy to exhaustion - or close to it - itself. Of all the battles so far in the war, this one seemed to involve the most general, drawn-out fighting, all along the front.

The Fourth Week - and the month of October, was not yet over. On the last day of the month, the Turcowaz Navy was to attempt another sortie from the Dardanelles...

Posted by Archduke Piccolo at 5:39 PM