Towards a Merchant Marine -

Somewhat inspired by David Crook's work upon his American Civil War and late Nineteenth Century navies (see here), I could not help but begin construction of  merchant marine - especially for the ongoing Blacklands War. That campaign has taken a life of its own, and starting to build up a backlog of battles to be fought, on land as well as at sea.

Here is the work in progress upon an armed merchantman, still using my 'cartooned' form of construction. For the purposes of the Blacklands War, she may be called Vasilios Korymos, or perhaps Raul Pindos, or, since the word forming the surname (my having found it whilst looking up something else in my Classical Greek Dictionary) is so hard to resist, though it has nothing to do with ships or the sea, Gouiliam Iambofagos. Let that stand as my rather inconsequential memorial to William McGonagall. 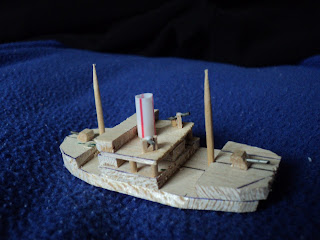 Posted by Archduke Piccolo at 1:01 PM