On the last day of October, the Turcowaz fleet set forth once more through the Dardanelles Strait to face the Hellenic Navy. On the previous occasion, they had got the better of the encounter, and broken the blockade. Yet, owing to the narrowness of the point of egress into the Mesogesean Sea, the maritime strategic situation remained unfavourable to the Turcowaz Navy. To be sure, there was the whole of the Turcowaz Orientalis littoral to be considered, but large seaports and anchorages were wanting - the narrow bays at Smyrna and Marmaris being equally susceptible to blockade.
To wipe out the Hellenic fleet reckoned as beyond the capacity of the Turcowaz Navy, nevertheless, the Admiralty at Ionople were pleased so far with the results obtained.  They were resolved as soon as may be that a powerful, well trained and fast vessel break out, past the Hellenic watchers over the Dardanelles, and into the open sea. However unlikely that the enemy heavy cruiser HNS Georgios Averof would yet have been fully repaired, it could only be a matter of weeks or months. If the light cruiser TNS Hamidiye should induce Georgios Averof away from the northern Thrakean Sea, so much would be to the advantage of Turcowaz. To get past the Hellenic watch upon the Dardanelles, Hamidiye would need the protection of a powerful squadron. Two battleships and a couple of destroyers were available:

Embarking in the early hours of 31 October, the Battle Squadron, led by Muhtesem with Hamidiye bringing up the rear, and flanked by the destroyers to port, began to exit the Straits into the open sea. At once the whole force altered course to due west, the plan being, once well clear of the Gelibolu Peninsula, to turn nor'west by north, and escort Hamidiye through the strait between Gokceada Island and the Gelibolu shore. Once the cruiser was through and well on its way, the main body would return to the Dardanelles, and thence to their Sea of Marmara anchorage. Of course, it was unlikely that this could be achieved without a fight, but the Admiralty's attitude, shared by the Turcowaz crews, was that a fight would be so much the better.

Following the setback of the Battle of Imbros, the Hellenic Navy kept more a watch over, than a blockade, of the Dardanelles. HNS Hydra under extensive repair, and HNS Psara sunk, Rear Admiral Pavlos Poliomyelitis appeared inclined to favour that class of vessel for maintaining an inshore watch. On this occasion, the coastal battleship HNS Spetsai had a single destroyer, HNS Leon, in attendance. So exiguous had Hellenic naval resources become, that the offshore watch comprised just the lone battleship HNS Lemnos, also accompanied by just the one destroyer, HNS Aetos. The orders to Spetsai were to engage at once any enemy force they came down the Dardanelles. The Offshore Watch squadron would come up the moment they heard the guns.

For the following battle I incorporated the ideas I suggested in my Naval Chromium posting. I wish I had taken the trouble of re-reading it, because I clean forgot my suggestions for the torpedoes, and treated its results the same as for gunfire critical hits. But I played it that torpedoes (patterns of 3 each salvo) hit only on a '6', but were always treated as critical hits. We'll see how that worked as the battle unfolded. Strangely enough, the torpedo boats of both sides played a major role in the unfolding events.
As the Turcowaz Battle squadron nosed out from the mouth of the Dardanelles strait, lookouts aboard Muhtesem at once espied the smoke of the Hellenic Inshore 'squadron', far to the sou'west by south.  Turning briefly westward, then upon the more northerly course, the Turcowaz ships were more than happy to see HNS Spetsai close the range.  Although the Hellenic ironclad was able to bring its more powerful forward batteries into action against Hayreddin Barbarossa, they were far outmatched by the combined salvoes of the pre-Dreadnought and the ironclad Muhtesem.  For all that, Turcowaz gunnery was to prove woeful for most of the action.  Just one 11-inch shell struck its target - but proved critical.  Striking upon the starboard upper hull it started a fire close to Spetsai's forward magazine. Quick thinking by the guns crew flooded the magazine (card, 6S), but that meant that after the next salvo, starboard main gun would be out of action.

In the following, I switched to using white dice for Hellenic Navy gunnery; green for the Turcowaz, and red for both sides' torpedoes. Larger dice represented primary armament; smaller dice the secondary. Instead of placing the card for a critical hit beside the critical hit die (as in the above picture), I placed it beside the vessel affected.

Turcowaz course alterations rather reduced the number of main guns that could be brought to bear upon the Hellenic ironclad, but another lucky hit knocked out the latter's after turret. From now on, only the larboard 10.8-inch gun remained in action of Spetsai's main armament. For its part, a 5.9-inch shell struck Hayreddin Barbarossa close to the waterline. The battleship began to take on water.
The battleship Muhtesem about to cross the 'T' of the Hellenic ships, the lookouts became aware of the approach from the nor'west of two more Hellenic vessels: the powerful battleship Lemnos, and its destroyer consort. About to engage Spetsai, Sea-Captain Abdul Hamid ordered the forward main turret to engage Lemnos instead. The rear turret unable to traverse yet to engage the pre-dreadnought, continued firing at Spetsai.

Note: The rules state that no ship may fire its primary armament at more than one target per turn. I felt that in the circumstance in which two targets were available, but one could not be engaged by both turrets, there was a case for splitting the fire. In this instance, both turrets could have engaged Spetsai, and maybe that's the way I ought to have played it. Yet I also felt that, Lemnos being such a powerful unit, it was in Mehtesem's interest to engage early, even with limited available firepower.  There seemed to be no reason to lift altogether the primary gunfire against Spetsai, if that were available. Now, I accept that if both turrets could fire at Lemnos and at Spetsai, then it's an 'one or the other' thing. I'm still not sure whether or not I was right to take the line I did.
The results of these exchanges were 'honours even', but proved rather less fortunate for the Hellenic fleet. The secondary salvo from Spetsai scored three hits upon Hayreddin Barbarossa, for two in reply, but the destroyer Leon also took a couple of hits.  The first salvo from Lemnos scored a hit upon Muhtesem, but the latter got the better of the encounter - a lucky shot knocking out a gun from the Lemnos forward turret. Having got itself, still afloat, within torpedo range Leon fired off its starboard tubes.  The whole 'pattern' missed their target! 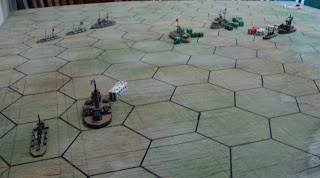 Once the Lemnos and Aetos had arrived, the sea battle descended fairly rapidly into a wild melee.  So far, the Turcowaz destroyers, along with the light cruiser, Hamidiye, had kept out of the action.  Whilst it was not in the interests of Turcowaz that Hamidiye get itself too involved in the battle, there was nothing - apart, perhaps, from enemy fire - to stop the destroyers joining the fun!

We'll see what happened next time...
To be continued.
Posted by Archduke Piccolo at 2:40 PM