Last Sunday (28 March) Paul ('Jacko') and I played a Command Decision World War Two game - the first either of us have played since early in the 2000s.  Probably its the first CD game we've played together for nigh-on thirty years (where do they all go?!). We both just wanted a blow out with something a little different from what we have been doing recently on the war games front.

The scenario comes from the Bastogne campaign module booklet that I bought even before I got the CD rule set. This one, #9 Noville, takes place on December 19, 1944 - the fourth day of the Ardennes Offensive - Hitler's 'last gamble', or one of them. It pits elements of CCB/ 10th US Armoured Division - Team Desobry - against the better part of the whole 2nd Panzer Division. This would be an entirely one-sided battle, were it not for the ground conditions (heavy mud) and weather (beginning at 0500 - night - and a day of intermittent fog). For this I prepared some cards that, move by move, displayed the weather, and hence visibility.
To quote the booklet:

Situation: Team Desobry of CCB/ 10th Armoured Division, is to hold the road junction at Noville, guarding the northern flank of the Bastogne perimeter. 2nd Panzer Division must break through as quickly as possible, securing the town to protect its supply lines, and press on to the west.

The Americans begin the action with a small battlegroup - Team Desobry - comprising tank and infantry companies from Combat Command B, 10th Armoured Division, together with an assortment of platoon-strength supports, and stragglers from 110th Infantry Regiment (26th infantry Division) and 52nd Armoured Infantry from CCR, 9th Armoured Division, in and around the village of Noville. They could expect a trickle of reinforcements later in the day, a platoon of Hellcats at midmorning with another in the late afternoon, and  in the early afternoon a whole battalion of Parachute infantry from the 506th Airborne Regiment.
The German strength - the best part of the whole 2nd Panzer Division - was to build up throughout the morning and early afternoon, beginning with I Bn/ 2nd Panzergrenadier Regiment (motorised) and I Bn (Panthers)/ 3rd Panzer Regiment, minus two of its four companies.  To these, were added:
0700: HQ and IIBn (PzIV) 3rd Panzer Regiment
Actually, this unit had 2 companies each of PzIV and JgPzIV, one of the former pair being engaged elsewhere.
0900: HQ, Infantry gun and Engineer Coys, plus IIBn/ 2nd Panzergrenadiers (on bicycles)
1100: HQ, 2nd Panzer Division, 38th Panzerjager Abt with 2 StuGIII and 1 PaK40 coys.
1400: HQ, IG and Engr coys plus IBn/ 304th Panzergrenadiers (gepanzert) and a third Panther Coy from I Bn/ 3rd Panzer Regiment. 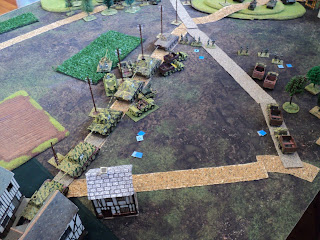 Even though the panzer and armoured infantry companies were under strength, this was certainly a formidable force that the scratch assortment of Yankees were expected to face! 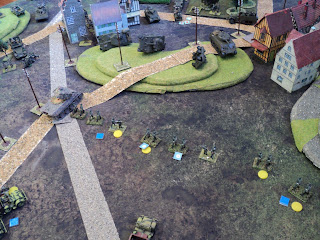 I won't go into a lengthy narrative here, mainly as we got only as far as late morning and the imminent arrival of the StuGs and PaK40s.  During the late hours of darkness, the whole column, led by the panzergrenadiers in trucks moved up the road from Bourcy, via Hardigny and Rachamps.  Dismounting just beyond the last village, 1st Company carried on, followed by the 3rd, whilst 2nd Company took the road northwest to approach Vaux village over the wooded hills. 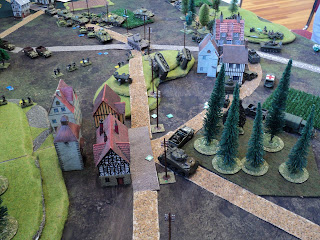 The Panzer recon platoon accompanied the 1st PzGr Coy up to the crossroads, reaching that point just as dawn broke to a heavy mist or light fog. A M18 Hellcat platoon (C Coy/ 609th Tank Destroyer Bn) close by Noville village facing up the road towards the crossroads, caught the recon panthers in flank at less than 1000 yards, reducing then at once into wreckage. Spotting the Shermans on the hill, the following panthers, with some fine shooting, knocked out two platoons' worth just before the fog thickened and, reducing the visibility to 100 yards, obscured the enemy from view. 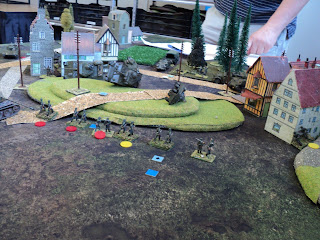 An attempt by 1st PzGr Coy to carry the hill was met by a hot fire from beyond that caused heavy casualties. My Command Decision set being the First Edition and lacking the casualty tokens, I have added a set of coloured counters to the mix, green, yellow, red, in turn signifying the number of hits received.  Red places a stand at hazard of elimination at the next hit. So from the picture above, you can see that the three-stand company (1st) has been badly knocked about, whilst 3rd Company to their right has taken by light casualties so far.  Almost out of the picture, 2nd Company has also taken slight losses as they approach the undefended Vaux village.  (Actually, I started with yellow, but, as they were veteran ought to have with green.  The Yanks were mostly veteran also, but the CCR/ 9th Armoured stragglers ought to have been classed as 'green'.  Never mind - it made little odds.) 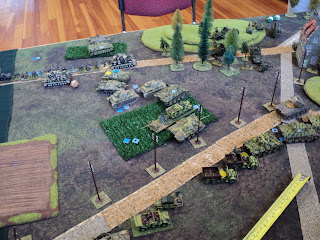 Upon arrival, rather embarrassingly ahead of the IInd PzGr Battalion, the IInd Panzer Battalion came up the Bourcy-Noville road, pausing before the wooded hill to deploy into the muddy fields beside the road.  In the heavy mud, they were at some risk on bogging, just as the panthers had been earlier (part of 1st Panther Company had indeed stuck fast and the crews were frantically trying to unstick themselves).  However they were reluctant to to press further forward until the IInd PzGr Bn had come up.  At that, one jagdpanzer platoon did bog down, shortly before it came under heavy artillery fire whenever the fog momentarily cleared. 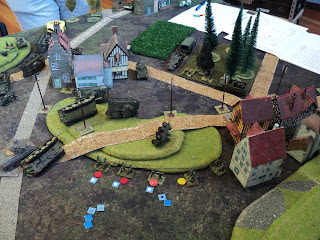 With Vaux in their hands, the Americans forced off the centre hill, and a route westward almost secured, 2nd Panther Company drove onto the hill preparing to engage the enemy beyond.  The lead platoon strayed into bazooka range of the Noville garrison, which at once, with some astonishing shooting put paid to the panthers in moments.  On a D10: 5s required to hit, 3 hits; damage 1D10 against side armout defence of 4: 10, 10, 7 = +6, +6, +3.  Goodbye panther platoon.  Overkill. 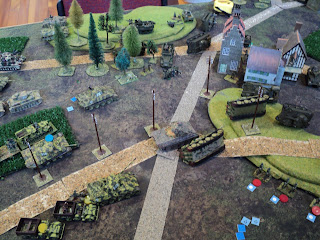 The final act of the day was a brisk tank battle east of Noville. Poking their noses out from beyond the village, the last of the Sherman company took out the second half of the 2nd Panther Company. But retribution was swift. Remobilised from the clinging mud, the 1st Panther Coy had edged closer to Noville. High velocity 7.5cm shells slammed into the American tanks. Now the only really effective anti-tank weapons they had available were on a Hellcat platoon lurking in Cobry, southwest of Noville.

We had to call the action at this point. For the first time in a good while this was played at the club,  and the set-up, action (some 12 turns) and a humungous lunch took us from 11am to a little after 4, when it was time to pack up and go home. This was probably too ambitious a project for the time available (and an 8ft by 6ft table would have been preferable to the 8ft by 4ft we had to make do with), but this was not possible to play at home.

The kit was mine (German) and 'Jacko's' (American); the terrain mostly mine, and thanks to the Woolston Club for the fine 'heavy mud' table mat!

Could the Germans have cleared Noville, and  possibly Cobry, before the 506th Parachute battalion arrived to spoil the party?  I think so.  IInd PzGr Bn and the Panzer battalion was just about set to sweep the wooded hill along the Bourcy road; I PzGr Bn was still a force to be reckoned with in the north, and half the Panther battalion remained a presence in the centre.  Some useful support weapons and combat engineers were also arriving.  Having said that, though, the loss of three panther platoons was not to be sneezed at...
Posted by Archduke Piccolo at 3:17 PM