Although in the last few weeks a deal of my time has been devoted to playing and writing up - especially writing up - my Waterloo battle, I have been tinkering around with several other projects.  A generously disposed mind might suppose I've been multitasking, but really tinkering - or even pottering - is mush closer the mark. 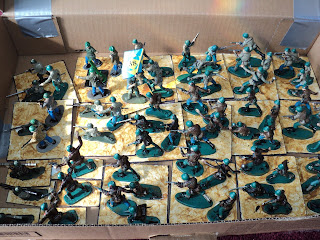 First off, my reading of Tim Gow's war games projects have persuaded me that maybe I should adopt something similar for my Army Men (a.k.a. Jono's World) forces. Such is the 38th Regiment, the Army of the Republic of Kiivar.  These armies still use battle flags. 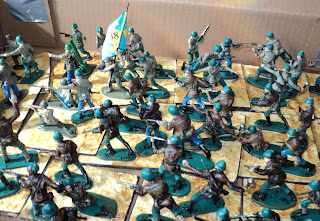 Artillery is always useful to have, and if you can't buy them, make them. This project was done years ago, but the sailorman gun/howitzer crews have only in the last year or so been painted. I have three of these heavy pieces, forming a battalion or regiment. 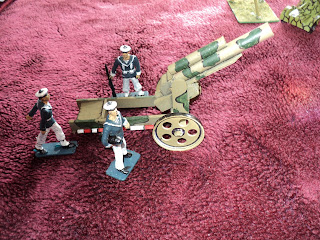 The items below are more recent acquisitions.  The gun is a very fine piece, the towing vehicle a misshapen thing that has a useful tow bar. 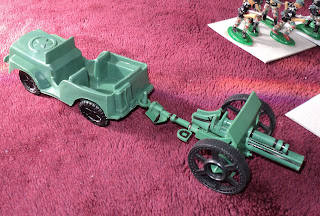 The following are my 'Panzergrenadiers' in the service of Ra'esharn.  The beauty of this system is that each stand might represent a section/ squad, or it might represent a whole company - possibly a battalion - depending upon the scale of action I'm looking for. 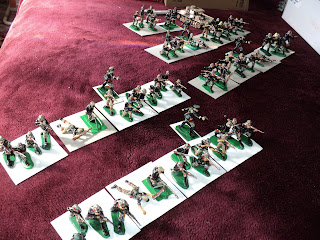 So this array might be a company of 4 platoons, or, probably more likely given the directions I've been headed lately, two regiments, each two battalions.  Add 4 or 6 tanks, we have the sharp end of a Panzer Division. 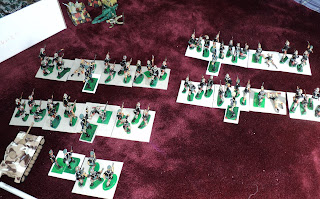 Next on the list are my mounted Samurai, additions to the foot figures used in the Shogun board game for fighting Sengoku campaigns.  The regular reader of this blog will have seen Clan Red, and some of Clan Blue in action.  Here are the others. 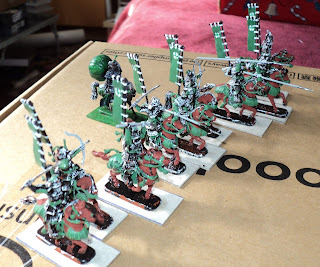 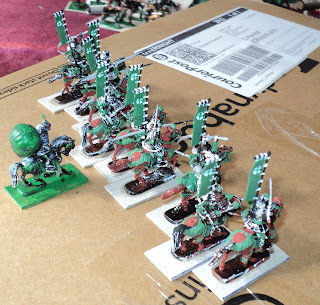 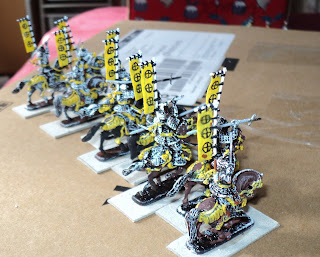 I painted these yellow, rather than orange, for two reasons.  One was that I thought I didn't have a good orange paint, but I did have yellow.  The other was that I had a source for a yellow flag design and none for orange.  The design I've used is only approximate - a simplification - but it does give this clan a certain battlefield 'presence'. 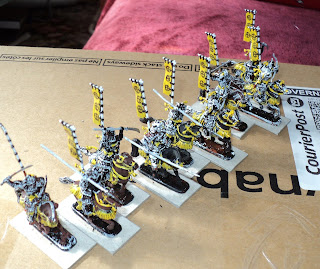 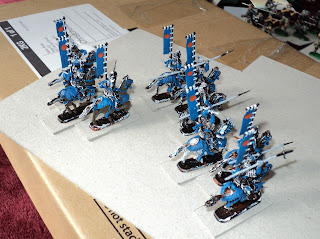 I really didn't have a purple paint, but I was quite happy with the appearance of this outfit.  The red sun on the flags looks pretty sharp. 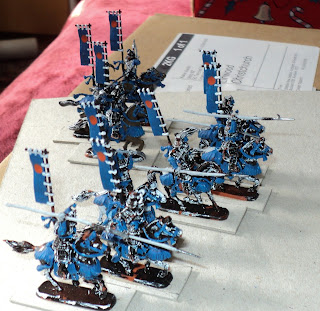 We'll finish this bit with some group pictures... 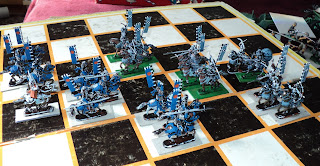 The Blue and Purple Clans are sufficiently contrasting... 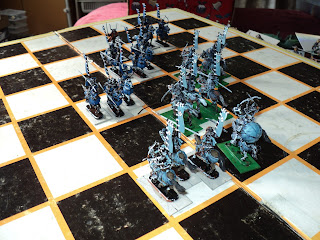 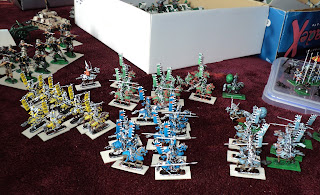 Having a bunch of HaT Napoleonic cossacks kicking around doing nothing, methought they would be a suitable addition to my Izumrud-Zeleniya (GREEN) army.  I figured that between 1815 and 1880, the general appearance of cossacks would not have changed much... 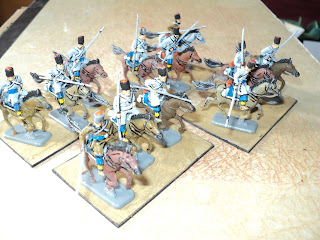 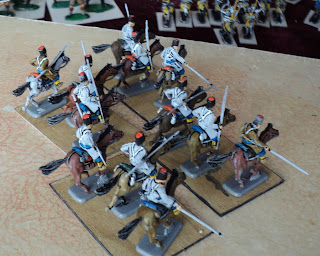 The figure leaning over to stick his point in somebody's liver is a particularly annoying one. He looks as though he's trying to trip over the guy next to him... 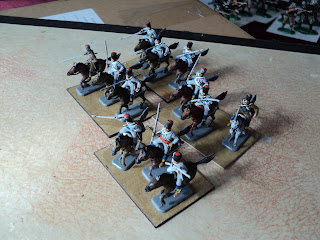 There is one other project that has engaged something of my attention, having to do with my imaginary 18th Century forces. A new army has come into being, based around figures that were homeless and seemingly surplus to requirements. I thought of it as the Army of the Herzogtum of Rechburg - in memory of the late Barry Taylor, author of the Lyndhurst Chronicles of several years back.  Unfortunately Barry passed away with his campaign narrative not yet fairly begun. 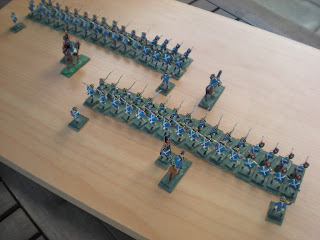 However, Paul 'Jacko' Jackson, a closer friend of Barry's, has embarked upon building his own Rechburg Army. Mine will become a bordering country to its north. A small army, it will have one feature unique from all my 18th century armies. The network of spies the Emperor Violoncello established throughout the whole of Europeia, maintained by his successor, the Empress Harmonica, and whose reports are regularly received by Archduke Piccolo, has observed that Nordmark's infantry battalions now include battalion guns...

More on this project another time.

Posted by Archduke Piccolo at 7:16 PM