Here are my torpedo boats, finished apart from some tidying up to do. 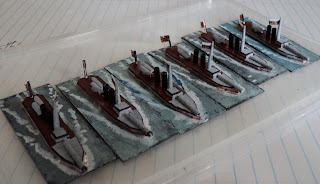 This is the whole Navy of Chervenia (Bulgaria) for the coming Second Blacklands War: six torpedo boats.  Since the originals were all named, I guess I'll have to name these.  Since taking these pics 10 minutes ago, I've added discreet single or double letter labels on the rear starboard corner of the base: 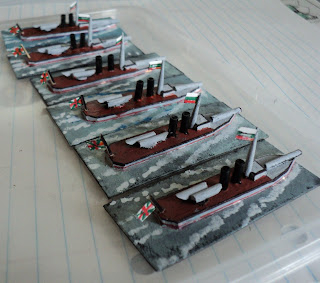 Some of the tidying up will involve adding more white to the wakes, especially where the red of what I used to do the waterline has run (Damn).

Lately I have found out more about torpedo boats and destroyers.  One surprising discovery was that until World War 2, neither class of vessel could reload their tubes.  Even in that war, only the Japanese had reloadable torpedo launchers.  With their 24-inch 'Long Lance' torpedoes, that must have given them an enormous advantage in certain types of naval combat.

So torpedo boats' and destroyers' torpedoes are pretty much one-shot deals, the number of tubes they have equals the number of torpedoes they get.  I probably ought to redesign my Hellenican (Greek) and Turcowaz (Turkish) destroyers... but I won't.  Probably.

In the First Blacklands War, I was playing the destroyer's torpedo attacks more or less correctly (3 attacks only), but was way off in my understanding what was going on.
Posted by Archduke Piccolo at 3:09 PM