The Battle of Kantsi Strait - A 'Mighty Armadas' Action.

The disastrous battle of Omez Strait, which saw the destruction of half Kiivar's battle fleet, brought home the problem of how to deal with the Ra'esharn fleet of Cacadaemon Class monster battleships. In that battle, four of Kiivar's Leviathan class battle wagons were sunk by just three Cacadaemons - for the loss of just one of the latter. True, at the outset of the war, another, RNS Kitsune, had been sent to the bottom by a hunter group comprising a Leviathan Class and a couple of much lighter battlecruisers, in the action off the River Salver.  But that success, it seemed, flattered to deceive. 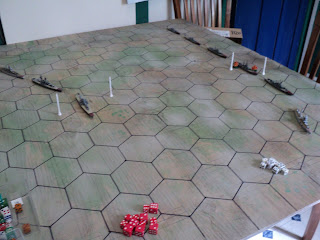 After several months of waiting, suddenly an opportunity presented itself. A squadron of Ra'esharn battleships had been found lying up in a southern Omez seaport, undergoing minor refit and revictual. A large scale bombing raid had failed to register a single hit upon the warships, but had pretty much put the port facilities out of commission for a long time to come. The Ra'esharn Squadron Commander, Runosuke Suzuzuki requested and was granted orders to quit the sea port, and sail home for a destination on the east coast of Ra'esharn Island itself. But to get there, the battle squadron had to pass through the Kantsi Strait - no very narrow a  passage between Ra'esharn's east coast and the main island of Saabia, but dangerous if an enemy were to be encountered there.
Sure enough, an enemy was. Unbeknownst to the Ra'esharn Naval High Command, a large squadron of warships, en route from the Kiivar to the Saabian archipelago, about to pass through the strait at the same time. This squadron comprised four Leviathan class vessels that had been joined by a pair of Saabian warships. So the enemy squadrons, unaware, were approaching on slightly converging routes that remained unchanged when they sighted each other.

The following action used my 'Ultra-simple Naval Games' rules.  The scenario was designed to pit two reasonably matched fleets together.

The two forces seemed to be evenly matched, the outcome chancy.  The combined strike power was in favour of the allies (52-48); the protection marginally in favour of the monster Cacadaemons (64-62).

One rule I added to my earlier 'Ultra-simple' set.  When a ship's Protection' (Floating Points, if you will) had been reduced to one quarter (rounded) of its original, it had, if it could, to withdraw from the action. It could still fire any guns in range and able to be brought to bear.
As the courses converged, it became early apparent that the head of the Allied column was rather further forward than the Ra'esharn. At once Admiral Shang Wong ordered a slight change of course, to try and 'cross the T'  of the enemy line; a move promptly answered by the same change. At that moment, the lead Ra'esharn ship, IRS Krampus found the third Kiivar ship, KNS Behemoth just in range of its guns. In the brief exchange of gunfire that followed, Krampus found the range and put two 18-inch shells aboard Behemoth. The latter's salvos were altogether ineffectual.

The change of course took the two vessels out of range of each other, and a duel developed between Krampus and the lead Kiivar vessel, KNS Cerberus. Again, the superb gunnery aboard Krampus at once straddled the Kiivar vessel, knocking large holes and starting serious fires as no fewer than 4 shells struck.  Three Kiivar vessels - Cerberus, Leviathan and Behemoth failed totally to find the range, possibly confused by each others' shell splashes - not a single shell found its way aboard Krampus.

The ship behind, IRS Dantalion, was less lucky.  IKS Tarasque landed two 15-inch shells onto the Ra'esharn flagship for just the one 18-inch received.
As yet the Saabian ships were not yet in range, at which Rear-Admiral ordered a parallel course change to bring his two vessels more quickly into the action. That brought all battleships into the fight, but two of the Kiivar vessels - Leviathan and Behemoth - seemed still unable to find the range. On the other hand Cerberus got some revenge for the damage taken, though still taking some knocks still. At the rear of the columns, Tarasque scored another hit on the Ra'esharn flag, whilst the Saabian ships found themselves each in a duel with one of the Ra'esharn ships. Less protected than the other vessels, they had to hope that the Kiivar ships could put the lead two enemy ships out of action before they went under.
It became soon plain that there was no question of the Ra'esharn ships' superior gunnery, or that their two lead ships could be soon knocked out of the action.  Krampus scored yet another direct hit upon Cerberus.  Although she and Leviathan scored two strikes back, that was the end of the battle for Cerberus.  Smoking heavily from several raging fires, she dropped out of the line.

Meanwhile IRS Dantalion slammed four shells into Behemoth. Badly damaged, that vessel was barely able for the moment to keep its station, and that not for much longer. At the rear of the line, the ships had shortened the range, with consequently far more damaging salvoes from both sides. Five hits on each brought both Saabia vessels close to a sinking condition, but they were handing out several damaging licks of their own. 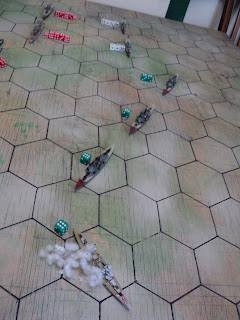 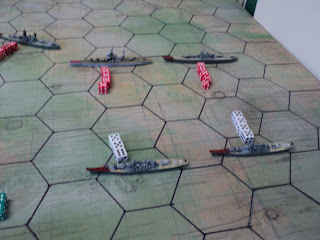 Hardly a half-hour into the action, and only Leviathan and Tarasque - the latter hardly having received any gunfire at all - continued able to stay in the battle line. As they turned away, the others could bring only their rearward guns to bear, whilst the Ra'esharn gunnery continued their mercilessly accurate battering. Before they could escape beyond the enemy gun range, both Saabian vessels received more damaging hits than they could possibly survive. Within minutes of each other, both went down, flaming wreckage from end to end until the closing seas put out the fires. For their part, they managed to concentrate their salvos onto IRS Rakshasa. Reduced to a near sinking condition, that ship also pulled out of the battle line. 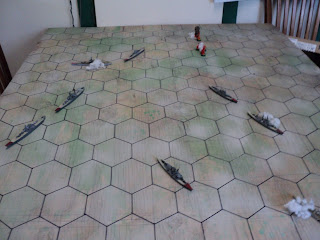 With the sinking of the two Saabian battleships, the action came to an end, as the Kiivar ships, which had never got closer than long range, made off, away from the punishing Ra'esharn gunfire. 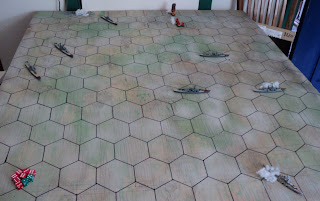 There was no questioning this Ra'esharn naval victory: two Allied battleships sunk and three reduced to a wreck for just one Ra'esharn battleship seriously crippled.  Here follows the tally:

Poring over the battle reports, naval analysts on both sides remarked upon the inexorably devastating gunfire of the Cacadaemon class monster ships.  For every three hits scored by the Allied guns, the Ra'esharn handed out four.  At that rate, there was but one way this battle could have gone.  For a long while to come, Ra'esharn had established a hegemony of the seas...

Posted by Archduke Piccolo at 7:32 PM