Two days out from Tenth Army's projected march from camp supply to seek out the enemy, the heavens opened.  For four days the rain bulleted down, driven by the icy wind from the distant mountains, turning Camp Supply into a quaking quagmire. Four days the storm lasted; four days of thunder, lightning, sheets of rain and hurricane winds; four days in which, shivering in their bivouacs, tents and wagons, Tenth Army was going nowhere.  The poor Chinese prisoners found their own hastily constructed accommodations hardly proof against the extremes of weather.  It was fortunate they had completed the grisly post-battle tasks they had been assigned; and that General Jackson had ordered up from the border an extra medical supply.  It was due to his care and foresight that sickness did not sweep through the camp and immobilize his army indefinitely.

The poor Cavalry, keeping watch and ward over the roads north and the Chinese camp west of Weshall Pass, hunkered down near and within the abandoned settlement at Weshall Pass itself, and waited out the raving storm.  There was certainly no chance that the Chinese army would disturb their shelter.

All the same, it was almost a week behind schedule that Tenth Army finally broke camp and began its march north.

Here was how Tenth Army was reconstituted:

For his part, the Chinese Commander T'ai Kun Wu had worse problems.  His camp at least was reasonably well established and accommodations more or less weatherproofed with materials hacked and gathered  from a nearby forest, before the storm began.  But his army in such a sorry state, he had it all to do to reorganise and buck up the survivors of the campaign so far.
Among other things, he had to organise a small train to carry away the hundred or so magazine rifles gleaned from the battlefields of Midla Nowhere and Camp Supply.  After some consideration, he opted for a single regular formation - the 6th/7th  (17 figures/ 2,833 men) - to escort the important cargo.  Planning to lead this train himself, and leaving the sole surviving column commander to hold the present ground and delay the Union Army, he could not hide from himself the unreliability Army and leader both.  Reluctantly, and because the Emperor's trust in him was not misplaced, T'ai Kun decided to entrust the train to Hung T'u Sun. That little convoy set off a few days after the Chinese Armies had converged - about a week after the late battle.

Departing in the middle of the night, they escaped the vigilance of 'Reb' Klamath's cavalry, and got  clear away, not stopping until dusk the following day.

The reconstituted army that remained with T'ai Kun Wu comprised:

By the time General Jackson felt Tenth Army capable of marching, at daybreak, August 27, Hung T'u Sun's convoy was - despite the delays occasioned by the weather - more than three half-hundreds of  miles along its journey, and not far from departing the Forbidden Lands altogether. The three days it took to bring Tenth Army finally into contact with the Chinese, a further thirty miles had been added; thirty miles closer to the eastern railhead.

And there, on August 31, Tenth Army found its further advance halted. The Chinese Army was fortified to the eyes behind formidable earthworks built around a series of hills: and flanked on one side by forest and, apart from an interval of open ground, on the other by a marshy loop of a creek.  Not all of the Chinese line was dug in.  Some of it was covered by palisade obstacles that flanked hilltop redoubts.  But, and this T'ai Kun could not help, Tenth Army quickly established that the Chinese were woefully deficient in artillery - just eight guns, all of them smoothbores. 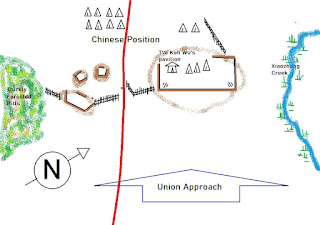 At about mid-afternoon a delegation emerged from the palisades flanking the road, holding aloft a flag of truce.  Having them guided past several of the rifled, breechloading guns, and several machine guns, the Major-General cordially invited the little group to a small mid-afternoon repast, with coffee or tea, according to preference.  His depreciation of the board disguised the quick-fire instructions he had issued of laying on the best that short notice and the limitations of an army in the field might allow.  Much came from his personal stock of supplies, especially some of the better quality Hendricks & Co's Army Biscuit.  He had a shrewd idea that even these eminent individuals would have been on short commons this last week or two...

Apart from his usual soft-spoken courtesy, the General waited patiently for the delegation to state the purpose of their visit.  After several minutes hedging around the topic and meaningless urbanities, the leader of the delegation finally came to the point.

"We have received this morning a missive from the Emperor. It stated that Imperial and Union officials have begun meeting. We thought it likely that you have not yet received notice of this meeting. They propose an armistice whilst the important matters concerning this territory are being negotiated.  That armistice to take effect between our respective armies upon our return to our fortified camp."

For a few moments the Major-General favoured the group opposite with his customary blue stare as he mentally rehearsed his reply.

"Such would be welcome news indeed, " he said at last. "But you will appreciate, gentlemen, that this Army has received no such communication. I am afraid, sirs, that until I do, I am bound to act as though no such message has arrived, or is likely to arrive. My superiors would expect me to respond in no other manner."  He paused.
"I have the power to accept your capitulation, however," he continued. "If you agree to raise a flag of surrender and to lay down your arms, we can cease hostilities forthwith. Under the terms of the armistice I propose, you and your Army will be at liberty then to march from this territory back to your own lands.  Otherwise, I propose to move upon your works come daybreak tomorrow."

"We are, of course, not empowered to surrender the army,' quoth the delegation's leader.  The T'ai Kun's bluff called, he was unwilling to try the patience of the general opposite by insisting upon the veracity of the imaginary summit meeting that brought him hither. "We shall, naturally, convey your proposal to his Excellency the T'ai Kun, but, you will understand that I would not be exceeding my instructions to advise you that he will not capitulate without a fight, or even whilst he has the freedom to march."

The Major-General nodded, "His Excellency has proved himself a formidable adversary. I would have expected nothing different from His Excellency." He raised his coffee cup in a toast, "To the morrow, gentlemen!" he said.

The delegation, guided back outside the Union camp, finally disappeared within the Chinese lines.  The Major-General turned to his Brigade Commanders.

"We attack tomorrow, sirs.  We have just this afternoon and evening to prepare.  Here are your orders..."

Posted by Archduke Piccolo at 2:41 PM