"The winter of imperial content following the coronation and investment in the purple of the young Dementius Katanyxis was followed by a spring of travail and a summer of woe. The provinces along the Mesogesean littoral had long been disaffected, and, after the warm glow of a new rule had faded, once more the mutter of sedition began making itself heard. Fortunately, the northern provinces, apart from remote Cherson, were on the whole well in hand, and the relations with the peoples beyond the frontiers there were as cordial.

Then, as February thawed into March, the Strategos of Southern Italy, George Kantankeros, announced himself the despot of Campania and Apulia, and declared himself independent from and no subject of Byzantium.

Naturally, the new Emperor was eager to test his sword, however reluctant to shed the blood of his subjects. The landowning military family Kantankeros had long been imperial rivals, and were themselves descended in a direct line from porphyrogenites. Such a rival might well not content himself with a none-too-rich territory at the southern end of Italy, and make a serious bid for the Imperial throne itself. The likelihood could not be risked.

At once the Emperor outfitted an expedition from the Imperial forces based around Byzantium to bring the nascent despotate back into the Imperium, and to decorate the walls of Brindisi with Kantankeros's head and extremities. By early April, his sea going transports and warships were across the Ionian sea, and the Imperial Army landed upon the Italian shore before Kantankeros could organise a fleet to stop them.

It was at this moment that Barbarians chose to make incursions into both ends of the Empire. First, the Patzinaks (Pechenegs) were permitted by the Bulgars to cross their territories and begin burning and plundering about Anchialus. The Strategos of Thessaloniki, Isaac Salonikos, at once gathered his full strength to intercept the raiders.

At the other end of Empire, the long-festering enmity between the Fatimid Caliphate and the Empire burst into open warfare, as the Emir Dumai Ed Din carried a large army into the region about Antioch. The Strategos at Seleucia entrusted to the guardianship of the Levantine frontier, Constantine Constantinopoulos, hastily gathered what force was immediately to hand, and caught up with the Fatimid Army not far from the ancient city..."    Michael Psellophanes, 'Byzantiad'

So much for the chronicler's narrative.  All this was decided by dice rolls as follows:

Xenographical Relations:
I have decided to conflate Barbarian and Byzantine attitudes into a single series of dice rolls instead of two. The reason was that we got a situation in which a reasonably friendly power (2 rolled) was extremely disliked by the Empire (6).  This seemed to me too hard to reconcile, so I just went with the initial series:

1.  Lombards - 4 = not especially friendly; not especially hostile relations. Cool, but not in a very good way.
2.  Bulgars - 2 = Quite cordial relations for the moment, and likely to last a while.
3.  Pechenegs - 6 = Pechenegs (Patzinaks according to Byzantines) get the urge to take a slap at the empire.  Plunder, loot and booty all beckon. Especially booty.
4.  Rus - 1 = Very friendly relations exist between Empire and the Principality.  Those stupid Patzinaks  have probably timed their raid very badly!
5.  Abasgian - 2 = Cordial relations with Empire
6.  Armenians - 4 = Relations a little strained, but not yet dangerously so.
7. Seljuks - 2 = On good terms with Empire
8. Fatimids - 6 = Very hostile towards Empire, embark upon a raid that might yet morph into jihad - all out war.

Provincial Affairs:
1. Brindisi - 6 = Local commander declares himself an independent and autonomous despot of the territories he governs.  This is open insurrection, though not yet a bid to take over the whole Empire
2. Mystras - 5 = Not at all happy; a lot of popular murmurings against the central power
3. Thessaloniki - 4 = Not bad, though signs that maybe the spirit of insurrection at the Imperial fringes is beginning to have its effect a deal closer to the centres of power.
4. Nicaea - 1 = Staunch.  The Domestic of the Schools can be trusted to keep matters in hand
5. Cherson - 5 = Disaffected.  It is possible that the Emperor might be forced to call upon the Rus to help out there should Cherson (Crimea) break into open revolt.
6. Koloneia - 1 = Loyal and trustworthy
7. Seleucia - 5 = Disaffected.  However, subject to attack from without, is far more likely to be called to their loyalty to empire than otherwise
8. Constantinople - no roll, not with the Emperor present! But were he to depart...

In this instance the battles are to be: 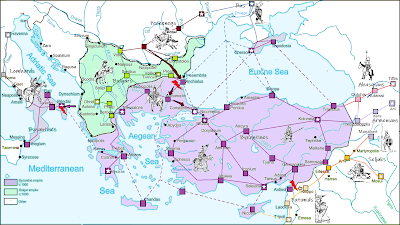 To be continued: 'The Patzinak Raid'.

Posted by Archduke Piccolo at 2:41 PM