Byzantiad - New Troubles for the Empire

"The traitorous George Kantankeros having slipped from the Emperor's clutches across the border to Benevento, in the land of the Lombards, he attempted to induce by empty promises of gifts and honours the help of Lombard prince to restore him to his usurped despotate. As Kantankeros arrrived almost alone, and with nothing but the clothes he wore and the horse he rode, his promises meant little to the barbarian monarch. Whilst the Emperor remained a short while in Apulia settling affairs and appointing a new governor, the Lombards were disinclined to try his metal. Instead, Prince Liutprand, surnamed 'the Lucky', sent a small embassy with gifts of his own and dulcet expressions of friendship. The embassy also offered to hand over Kantankeros, in chains or otherwise. Reading the straws in the wind, the former governor took advantage of the loose constraints under which he had been placed (don't leave town) and quietly quitted Lombardia, returning to Campania. There he began his campaign to bring himself back into power."

The Empire having negotiated successfully hazards and crises of April, 1001, a further series of perils and dangers emerged from without and within. Although the Italian provinces were not wholly pacified, the Emperor found himself with another revolt to deal with; yet another sought to to sever itself from the Imperium, and, worse, the Empire found itself in a state of open war on its eastern frontier.  I thought I would begin this posting with a part of Psellophanes's narrative, and then show how these matters come to pass by a series of dice rolls.  For the first such series, I refer you to this posting:
The Narrative Begins

Each 'barbarian' had rolled a die to indicate their attitude towards the Empire, from 1 very friendly, to 6 openly hostile. These scores could be adjusted up and down periodically, to determine whether these attitudes had changed. A score of 0 or less indicated an ally, or at least a people cooperatively friendly; 7 or more meant open war, and not just pin-pricking raids. These new rolls were applied as follows:
D6 = 1 or 2, adjust score (hostility level) down 1
D6 = 3 or 4, no change in attitude
D6 = 5 or 6, hostility level increases by 1.

Here were the results: 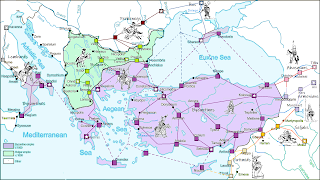 The same system is use to test the loyalty of the Imperial provinces and their Governors.

Provincial Affairs:1. Brindisi - A new roll, the rebellion having been defeated. Rolled a 5.  Not good.  Perhaps Kantankeros commanded some local popularity and support; the province remains disaffected, but not in open revolt. It seems that having escaped the Emperor's wrath, he has returned to stir up a new revolt. The Emperor hopes his new governor, Romanos Dioikysos, can assert and maintain control.  He has another revolt to deal with.2. Mystras - 5. Rolled a 6.  Of course it did. Disloyalty Level 5+1 = 6.  Open revolt.  With the Emperor just on the other side of the Ionian Sea, forsooth!   This will be another campaign to subdue a rebellious province.3. Thessaloniki - 4.  Rolled a 2.  Disloyalty Level 4-1 = 3 Loyal. No worries there. 4. Nicaea - 1.  Rolled a 3.  Attitude unchanged: still staunch.
5. Cherson - 5.  Rolled a 6.  Damn.  Disloyalty Level 5+1 = 6.  Open revolt; declaration of independence.  A real nuisance!6. Koloneia - 1.  Rolled a 5.  Disloyalty Level 1+1 = 2.  Nothing to worry about there.

7. Seleucia - 5.  Rolled a 4.  Disloyalty Level unchanged at 5.  Still disaffected, but have external problems to cope with.

There you have it: Mystras and Cherson getting bolshy and the Fatimid Caliphate at daggers drawn.

"During the course of events throughout April, the Emperor despatched an embassy to the Prince of Kiev. The Ambassador, Oleaginos Elaios, received instructions to offer the prince certain treasures and honours, that he might strike a blow towards the Patzinaks.'The Patzinak piles insolence upon infamy, rapacity upon robbery, arson upon arrogance,' quoth the Ambassador.
Eager to remain on good terms with the Empire - Blatoslav had, for dynastic and other reasons, eyes for the Emperor's porphyrogenite sister - the Kievan Prince was only too eager to fall in with the embassy's suggestions. Right soon, he gathered a host, and with it set off at the end of the first week of May, down the Dniepr River, and thence into the Patzinak steppe.


Leaving his newly appointed governor, Romanos Dioikysos, with a sufficient cadre upon which to build his local thematic garrison, the emperor betook his Imperial army back across the Ionian Sea unto the Pelopponese, where awaited him yet another revolt requiring his attention. Landing at Patras, he marched towards Corinth. Shortly before reaching that city, he found the Army of Mystras astride the road and barring the way...."
Michael Psellophanes, Byzantiad 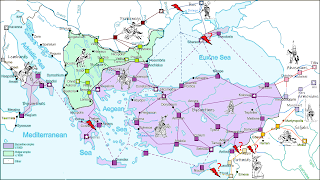 I will take up Psellophanes's narrative of the Fatimid War another time. The alert reader might observe that there has been no response (yet) to the insurrection at Cherson - a very dangerous situation, especially should its governor get extra ambitious...

Posted by Archduke Piccolo at 8:40 PM