The 'Retreat from Smolensk' narrative taking far longer than I anticipated to get itself written up, methought to fill the gap with this action from last weekend.  This game was played at the Woolston Club - a 'playtest' of the Black powder rule set.  The occasion and the scenario were arranged by Paul 'Jacko' Jackson (Painting Little Soldiers).  He and I played the Allies - his Prussians, and my Austrians.  Opposing us were Mark 'Chasseur' Ottley and his French troops.
The following pictures I took throughout the day.  It was something of a set piece, with the French purportedly holding a rearguard against slightly superior Allied forces. 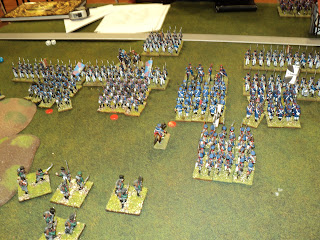 I stopped taking pictures from this point.  The French right was pretty much driven in, and the battalion and battery in front of the village overrun, but the effort exhausted the Allies.  The French were still in possession of the villages at the end of the day.

The rule set was similar to the 'fast play' set Mark has been using for his battles - one can see where he got some of his game mechanics from, at any rate.  The action seemed to flow pretty well, on the whole.  I did find the 18-inch musketry range pretty disconcerting - but the movement rates were commensurately generous.  Definitely a rule set for big tables, I think.  I'm also not a fan of 'saving rolls'.  In my own sets I don't use them, but instead use a 'rounding' or 'normalising' system similar to that used by Charles Grant for his 18th Century War Game.

But these were quibbles.  I had an enjoyable day's action, with convivial company.  My thanks to Paul for arranging the game and transporting me and my troops; and to Mark as an amiable adversary.
Posted by Archduke Piccolo at 4:16 PM