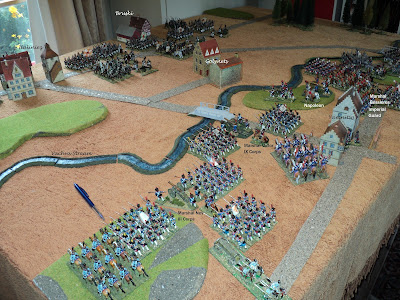 Concerned about the retreats and defeats of his far flung army corps to north and south of his main line of withdrawal from Russia, the Emperor Napoleon began to perceive his own retrograde march had so far been too leisurely. Possibly this was due to the force immediately pursuing his main army - commanded by Prince M.I. Kutuzov himself - was not so very powerful; and the pressure, though unrelenting, was not heavy enough to hasten the Grande Armee on its way. The II and VI Corps of Oudinot and St Cyr were still hightailing it towards Konigsburg; and the battered  I, IV and VII Corps, under the commands of Prince Eugene and Marshal Davout southeast of Minsk, were reeling westward pursued by the Austrian Army of Archduke Charles and a Russian army under Admiral P.V. Tchitchigov.
It was when intelligence arrived at Imperial headquarters of the imminent arrivals of  a Prussian corps from the north and an Austrian force from the south that Napoleon concluded that he needed to administer a sharp check to the pursuing Allies that they might be induced to keep their distance.
Sending General Junot with VIII Corps on to seize, secure or build crossings over the last major obstacle, the Beresina River, and Marshal Murat with much of the cavalry to keep the line of retreat clear of marauding cossacks, the emperor resolved to make a stand behind the Vachva River - a slight stream that lay athwart the Grande Armee's march.   From behind this minor obstacle, he intended to strike out and damage the Russians enough to ensure a leisurely journey back into Poland.
Napoleon had with him: 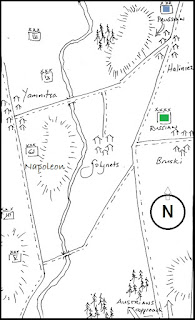 What with detachments and the cossacks marauding on the flanks of and ahead of the invaders' retreat, Prince Kutuzov had immediately with him a force rather less powerful than the army he was chasing. Some days before he had sent out the call, answered by Russia's allies, a Prussian Corps from the north, and a large force of Austrians from the south. At the moment Napoleon's army turned at bay, both contingents were still on the road: the Prussians on the point of arriving; the Austrians still a few kilometres distant. 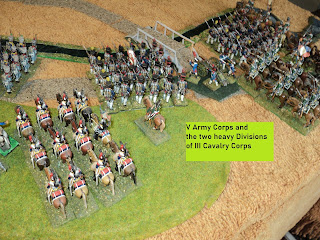 All together, the Allied Army comprised:

The armies overall were very nearly equal in size, but with the French enjoying a considerable superiority in cavalry numbers; the Allies having the greater numbers of infantry and artillery - at least, once the Austrians were up. 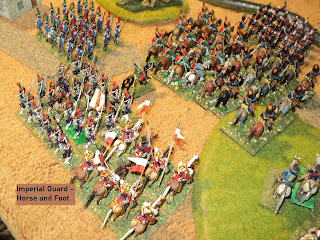 The pictures in the remainder of this post show the armies lined up: the Prussians just arriving upon the field; the Austrians not yet arrived. Each turn I would throw one die for the Austrians, whose army would arrive on table on a roll of '6'. As it transpired the Austrians arrived quite early on. For this battle I used my own Big Battles for Small Tables rule set. I invited Paul 'Jacko' Jackson to play one side; he chose the French. 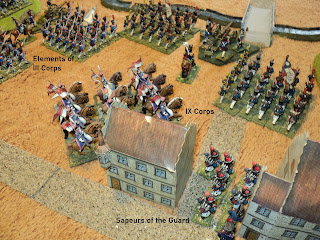 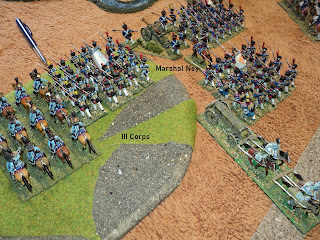 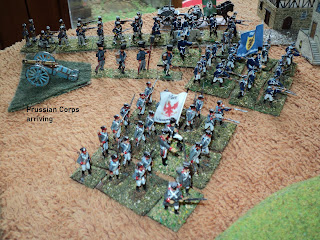 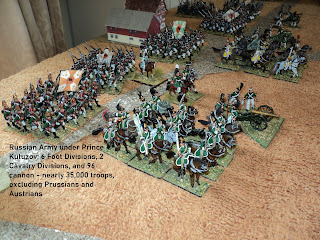 The final picture shows the battle well under way, the Russians advancing in the centre to seize Golynets village. The narrative will continue another time... 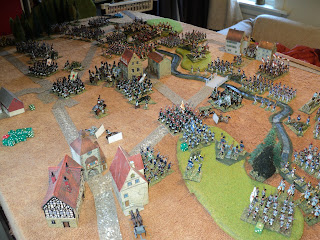 Posted by Archduke Piccolo at 1:36 AM

Email ThisBlogThis!Share to TwitterShare to FacebookShare to Pinterest
Labels: Napoleonic, Retreat from Smolensk