War of the Imperial Succession - A Chance Encounter


As the forces of M'yasma and Ursaminor were reaching their impasse at the border town of Hardbitten, the second, smaller invasion force had effected an unopposed crossing of the Unstroll River several miles upstream from the embattled town. The Ursaminor First Column, led by Feld-Marschall Lars Slaggahand, had encountered unexpected delays on the road from Bjornberg, and were approaching the market village of Schlippensleiden from the north just as the M'yasma invaders came in sight from the south.
The south road up from the river, and the north road down from the ridges fringing the river valley joined the main road that ran parallel at some distance from the Unstroll on the Ursaminor side of the river. Between both road junctions, lay Schlippensleiden, a sizeable village, which, if held by an enemy, would present a considerable obstacle to anyone marching along the valley road. So, to seize, take or carry the village was vital to both armies.
The sapient and well-read reader might have observed already that this action owes a great deal to the  '#41. Chance Encounter' scenario in the C.S. Grant's 'Green Book'. The respective forces were, in order of march:

The two forces were very nearly equal in numerical strength, Ursaminor having the more infantry; the Grand Duchy the more numerous cavalry. But Ursaminor had a small qualitative edge as well, in their Lifeguard (Livgarden) infantry and their heavier horse. It was also clear that the Ursaminor forces would reach the village first.  So it transpired. The Ursaminor horse swung off the road to flank the village on either side - the hussars to the left, and the cuirassiers to the right between village and the outlying tavern house. The artillery followed the hussars. Following them, the Stalhandske Infantry turned into the valley road that would form the main street of Schlippensleiden.
Marching up from the south, Pavlograd Hussars swung off the road the moment they came within sight of the village, and formed line. They soon descried the yellow pelisses of the enemy hussars emerging from behind the village. Following them, Ingermanland Dragoons marched straight on as far as the Manor House, before forming line facing the Rikswacht te Paard moving up towards them. Tver Infantry soon presented a front with their left flank resting upon the Manor House enclosure, whilst the artillery and Apsheron Infantry moved up to prolong the line.

The first engagement was a cavalry fight. No sooner had the respective heavy horse sighted each other than the dragoons seized the initiative (lower priority chit number) and charged. The fight was close and bloody, both sides took hard knocks, neither could gain a significant edge. The dragoons' numbers were at least partly offset by the cuirassiers' superior weight. When both sides drew apart, the cuirassiers had lost 3 figures; the dragoons 4 - not enough for the former to claim a decisive victory from the encounter.
But the losses were heavy enough for both sides to take a reaction test. The dragoons having the initiative meant they could count as 'advancing'. Although the cuirassiers would no doubt have advanced to meet the enemy, I don't trouble with measuring a 'halfway point', and make no adjustment (unless other factors supervene) for horse caught standing. However, who 'receives' the initial charge doesn't get the advancing bonus and looks to the 'standing' column of the reaction chart (in my rule set).

As it turned out, both sides fell back in good order, facing the enemy. 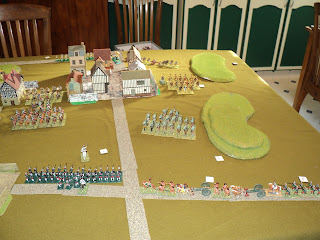 General view looking eastward
Meanwhile, the opposing light cavalry were also eager to come to grips, the Grand Duchy enjoying the superior numbers probably the more keen. The Kopparberg Hussars were in fact covering the deployment of their artillery. The time for Pavlograd Hussars to strike was now - at once, before the enemy drew aside to unmask their battery.

To be continued:
How will the outnumbered Kopparberg Hussars fare against their light horse adversaries? Ursaminor seizing the unoccupied village, can the Grand Duke's infantry wrest the place from them?
Posted by Archduke Piccolo at 3:47 PM