War of the Imperial Succession - A Chance Encounter (2) 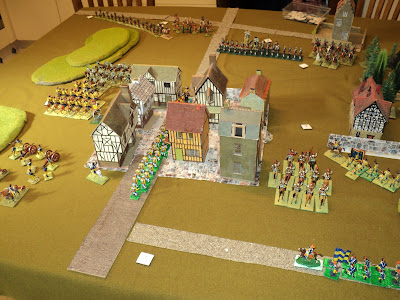 No sooner had the cavalry clash north of Schlippensleiden between the heavy horse resolved itself into indecision, their lighter brethren set about each other on the other side of town. This time, the Ursaminor had no qualitative edge even partly to offset the superior numbers of the M'yasma light horse. The latter had the initiative into the bargain (the '4' chip versus the '10'), Kopparberg possibly committed to covering the deployment of the Ursaminor artillery. 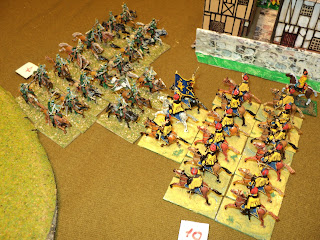 The following sequence of photos I hope will illustrate my combat mechanics. The figure count gives 19 figures to Pavlograd Hussars; 15 to Kopparberg. Cavalry Brigade General Nils Blanksson joining in the fray brings Kopparberg up to 16. Using an old school volley system, each side gets 1 die per 4 figures, plus an extra die for any remainder of at least 2 figures. So Pavlograd gets an extra, differently coloured die. 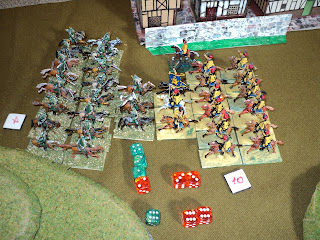 When rolled, any scores 4 or below counts towards hits upon an opponent. That is to say, the 'die range' is 4. However, Pavlograd's extra die has a reduced die range: 3 only. The scores in the picture tell the story. Four of Pavlograd's dice rolled within their 'die range', totalling 4+2+1+2 = 9 hits. Just two of Kopparberg's dice counted: 3+3 = 6 hits.  Not great for Kopparberg! 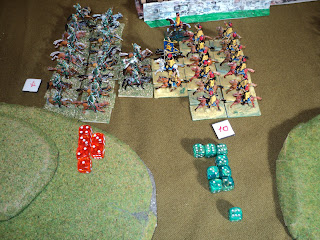 But the hits don't mean casualties. I group these into eight, plus any remainder, and roll the group number of dice for each of the groups. Kopparberg having delivered 6 hits, 6 dice are rolled, and duplicates discounted. The total number of disparate scores is the number casualties on Pavlograd: 4.  Nine hits being visited upon Kopparberg, they are split into eight dice plus one. For reasons that ought to be obvious, the single die is automatically a casualty. The '8' group came out with 3 sixes, a five, 2 threes and 2 twos - ignoring duplicates, 4 distinct scores. These 4 are added to the 1 to give 5 casualties. 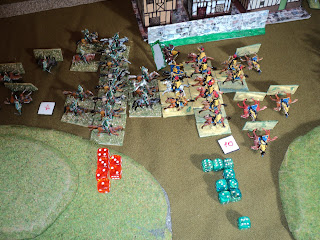 Kopparberg did well, as the criterion for victory was to exceed casualties inflicted against incurred by 50%. Having said that, the losses were heavy enough on both sides to indicate a reaction test was required to determine how well they stood up to the combat. As my rule set now stands, low rolls are what you're looking for (I am considering changing it, which was why in an earlier battle my initial reaction to four reaction rolls in one turn was to think 3 out of 4 units bolted!).

The three sixes have a special significance. Two sixes would have indicated a loss from among the unit command. But three goes to any general officer close by the unit. General Nils Blanksson chose to insert his person into the melee, General Nils Blanksson bites the dust (or is unhorsed or injured or taken prisoner). 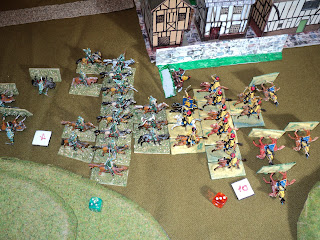 Pavlograd's reaction roll was none too wonderful. Having lost 4 figures out of 19 - 20% - their 'morale factor' (as I call it faute de mieux) has been reduced from '5' (first line regulars) to '4'.  So Pavlograd failed by 1.  However, they count as 'advancing' having initiated the charge. The result calls for a 'halt', though in the circumstances a withdrawal in good order seems indicated.

Kopparberg did rather better - sort of. They lost 5 figures, counting the general, but the general does not count towards the unit total. The loss of 5 out of 15 amounted to over 30% of their numbers, their morale drops from 5 to 3. Their reaction dice also coming up with '3' means they pass - a 50-50 proposition - and remain under effective command. However, it seemed meet that Kopparberg Hussars also drop back, and discover the gun battery behind them. 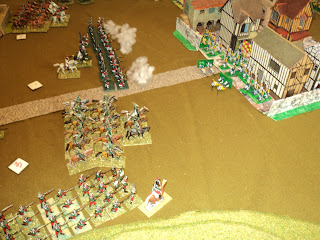 Under cover of the cavalry actions, the infantry and guns of both sides shook themselves out into a battle line. Tver Infantry soon brought under fire the Stalhandske Infantry just then in the process of placing the village in a state of defence. Unable immediately to strike back, Stalhandske stoically endured the incoming for some minutes before delivering their own fire. Having the advantage of cover from the village buildings and wall might well have proved decisive. 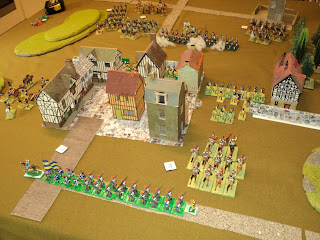 But they were helped by the upcoming line of the Livgarden Grenadiers on their right. The space between the village and the outlying guest house being sufficient for just three companies, the fourth dropped behind to form a reserve. At this point, Feldmarschall Lars Slaggahand felt that the battle was well in hand, for he still had a whole regiment - Tevastehus - unengaged and in reserve.  His own artillery was in action; the enemy's was for the moment masked by retreating horsemen. 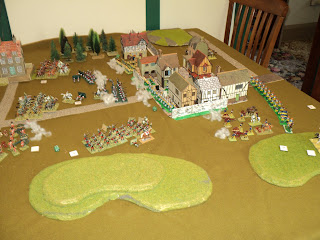 The M'yasma Commander was not well known as temerarious or timorous, but his army was about to find out. Whilst Tver infantry engaged in its unequal duel between the village garrison and the grenadiers, he ordered Apsheron infantry forward at speed, and to take the place by storm. 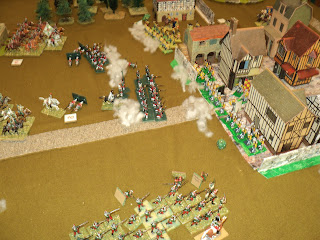 Braving ball and canister, the Apsheron assault column proved unstoppable. the column slammed into the left flank companies of Stalhandske.... 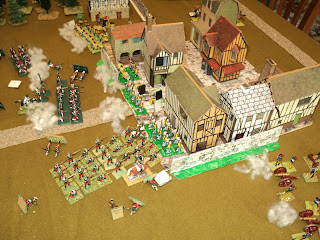 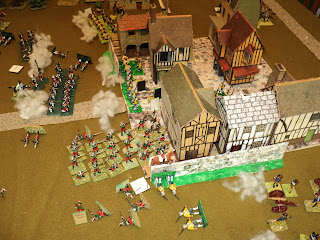 .... and induced the whole garrison to abandon their positions along the town fringes. They gave back to conform to the defeated companies.  The melee rolled into the centre of the village. 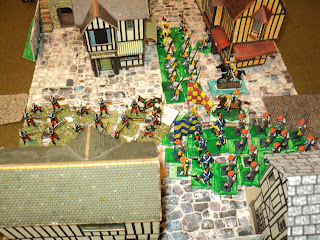 Fearing the place might be lost, Slaggahand flung in the fresh Tevastehus infantry. The combat flared up anew - and what remained in action of Stalhandske tried to add their numbers on their side. It was a disaster. Despite losses already incurred, Apsheron Infantry still had the numbers, and presented an implacable front to their assailants. Tevastehus infantry were brusquely flung back, out of the village precincts. 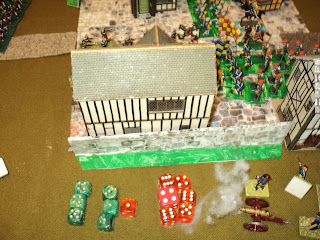 In the above picture the dice tell the story. The urban fighting reducing the die range from 4 to 3, the rolls were disastrous for Ursaminor. Of 6 dice plus a 'fraction', Apsheron scored 6 hits; of 6 dice Tevastehus scored - zip! Out went Tevastehus.  The weakened Stalhandske attempted a counter attack of their own - and they exited the town even faster, reduced to a handful of fugitives. 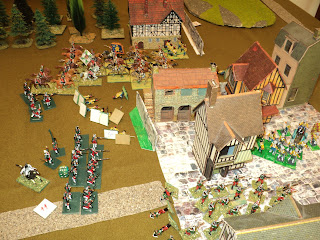 The tale of disasters didn't end there. Tver Infantry getting slightly the worse of its duel with Livgarden Grenadiers, the Ingermanland Dragoons nerved themselves for their second charge of the day. Blinded by their own smoke, the grenadiers failed to stop the horse, who promptly broke the grenadier line with hoof, pistol and sword. As the grenadiers fled, the Rikswacht te Paard stormed into the disordered dragoons. Vengeance was exacted, swift, abrupt - but not unqualified. The dragoons were routed, sure enough, but the gallant cuirassiers were now spent.  Their two clashes with the dragoons had left fewer than half their number still mounted.

At this point, Feldmarschall Lars Slaggahand conceded the palm. The vital village in enemy hands, he had nothing in hand to recover the place, unless he could perhaps induce Tevastehus infantry into another charge. Too little remained of his force under effective command to offer much prospect of victory.

General Ivan Glupiev was of course cock-a-hoop with his victory, hard fought, well earned - and fortuitous.

We'll finish here with the tale of losses: 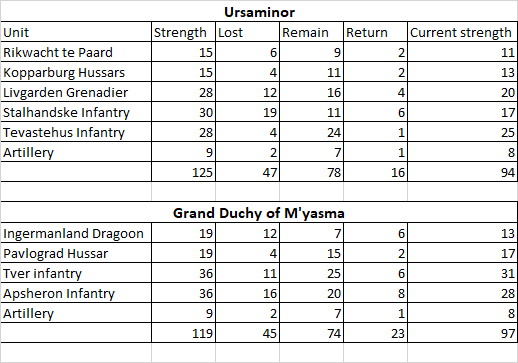 From this chart, you will see that overall losses were very nearly equal. However, both sides will receive back overnight stragglers, slightly wounded and otherwise having momentarily 'left the colours'.  As victors holding the field, M'yasma gets back half; having withdrawn, Ursaminor gets back one-third. The 'missing' sixth are just that: MIA, prisoners of war in the hands of the victors - some 8 figures.

This was an astonishing victory for the Grand Duke's army. Apsheron Infantry in particular was to come in for fulsome praise from the commanding general in his report to Constantine. The regiment's commander was in due course invested in the Order of the Kestrel 2nd Class, an award considered a great honour by the regiment.

Of course, this threw the Ursaminor high command into a turmoil. The invaders had after all forced the borders, and would soon be marching north to the capital. It was time to call out the militia.

To be continued...
But I will probably be posting on other topics, for a bit of a while at least...
Posted by Archduke Piccolo at 4:05 PM