Clear to the Military Governor, Lt-Col Mustafa Mustash, that a confrontation was not only inevitable, but imminent, he quickly formed and communicated his plans.  The narrow streets being no place for his armoured cars and larger vehicles, they would have to operate in the desert outskirts of the town.
Right.  The loyalist Citizen's Defence militia, already assembled amongs the storage sheds and loading bays in the Northwest sector of the town, he instructed to sweep in a southeaster direction, through the bazaar and in towards the commercial district (see Map).  The Relief Column's Motorised Company, less the mule, would drop in behind the militia, but carry on a sweep down the West Side, swinging eastwards towards the Arch-Mullah's lair: the Mosque.  The remainder of the column would protect their desert flank whilst carrying out what the Commandant hoped would be the right pincer of his plan of envelopment.

The following sketch map outlines the Military Governor's plan, and the manner in which he expected (hoped) events would develop... 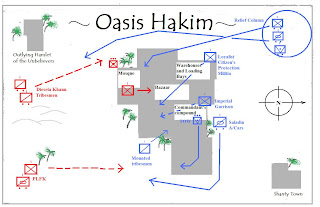 Meanwhile, the Garrison Armoured Car Squadron would move at once to the east end of town, and, sweeping around it would engage whatever motorised enemy they found.  In support of them, he sent his TOW platoon.    When further clouds of dust and sand boiled up from the south, the Colonel once had recourse to his well-known fatalism: the wine was drawn - he was no very abstemious man - and now must be drunk.  Besides: those technicals, lacking in armour, they'd be no match for his Saladins, surely...?

[Picture: the Lighter Group of Diesela Khann tribesmens' technicals head for the west side of the town...] 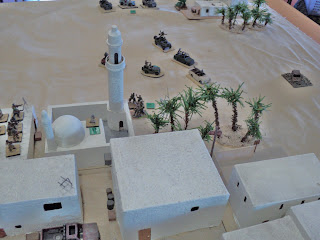 Before resuming the narrative, it behoves me to outline the forces available.  Note that Brian has posted this encounter on his own blogspot (See 'Fistful of Plastic' in the links list to the right), and details the manner in which the scenario was presented to me.  When looking over the various forces before making my choice, I did not know that I was looking at only part (about 2/3 to 3/4) of the final strength of any of them; the motorised tribesmen and their technicals were not on the table at all, and I was not told of the possible consequences of my choice (shifting alliances and what have you).  That made for an involving beginning, right there.  Having made a choice (based on what toys seemed to be available), then I was briefed as to the general and overall situation.

It meant you were suddenly faced with unexpected complications, and had to stretch the resources available to deal with them.  An interesting way to begin, and already I found myself thinking in terms of the situation as a problem, and how to tackle it with the resources at hand.  Instead of  listing these TO&Es in Command decision format, I'll use platoon or Company, or similar expressions.

[Picture: The Relief Column begins to carry out its orders, but is at once confronted by the Diesela Khann's Heavy Technicals in the distance.  In the brisk exchange of fire that follows, the Imperialists lose a third of their Saladin armoured cars.] 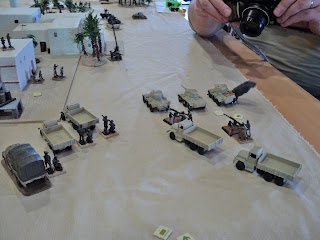 The forces available to or loyal to the Imperial Government were:
1. Imperial Garrison, Regular Army troops commanded by Lt-Col Mustafa Mustash himself:
- Infantry Company of 3 platoons and a platoon-sized TOW team;
- Armoured Car Company (Squadron) of 3 troops.

2. Loyalist Citizens' Protection Militia
- Company-sized force, trained in arms, but neither as confident or as well armed as Regulars.

[Picture: Regular garrison troops begin their sweep: 1st Platoon directly towards the Mosque; and the TOW team to the east of the town (the arrow was knocked...).  Cautiously, the Commandant retains 2 platoons within his compound...] 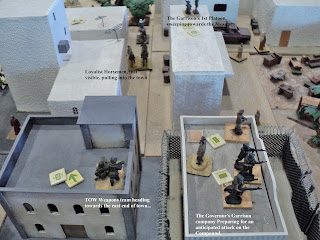 4. Desert tribesmen mounted on horses and camels - about company strength.

[Picture: The Garrison Saladin Company moves to the east end of town (the 'full advance' arrow token),  The faint arrow you see rounding the eastern outskirts is the intended further move by these vehicles.  Col Mustash planned a pincer movement.] 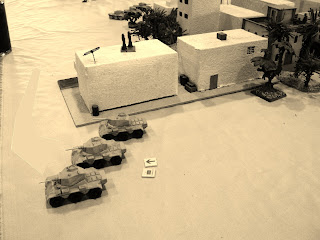 About to confront them in a contest for command of the Oasis Hakeem, was a polyglot but powerful force gathered under the overall leadership of the Arch-Mullah Addullah Dafullah:
1. Brotherhood of the Faithful - a band of highly experienced and fanatical (Morale 12) fighters:
- a strong company-sized force of gunmen and infiltrators (3 infantry and 2 patrol stands)
- a troop of 81mm mortars with extra ammunition being carried by a platoon of porters.

[Picture: the PLFK forces press up against the southeastern CBD; the loyalist mounted tribesmen having faded betimes within its back streets and alleys.  The PLFK foot followed them in, but the Saladins could not follow.  In the brisk firefight was to develop shortly within the town,  the loyalists  - the tribesmen supported by the Garrison's 1st Platoon - got the better of the firefight, and contained the PLFK in a fairly confined sector.  The PLFK armoured cars withdrew discreetly about a kilometer of so south of the town.] 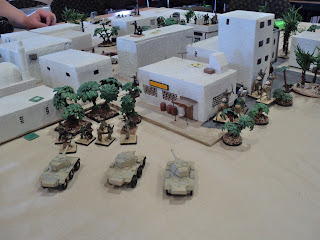 [Picture: the Light Technicals of the Diesela Khann tribesmen sweepng around the southwest corner of the town] 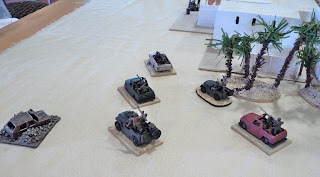 First blood went to the insurgents, when Major Iqbal's armoured cars came under a brisk fire at about 1200 meters from truck mounted RCLs.  Their return fire ineffectual - a feature of the shooting be Imperial Saladins all day - the armoured cars moved forward into an angle in the town's outskirts, the duel being taken up by the Relief Column's towed RCLs...

Posted by Archduke Piccolo at 9:06 PM