As the Garrison ARV (Saladin) Company rounded the east end of town, they could see in the distance the Khand Separatists (PLFK) close to and about to enter the central business area of the town.  Of greater interest, they could also discern beneath a crawling cloud of dust a sizeable group of technicals streaming off towards the southeast.  Farther off still, a mortar group seemed to be preparing fire positions.
.
About a mile - 1600 meters -  due south of their position,  a squadron-sized group of ARVs (Armoured Reconaissance Vehicles - Saladin Armoured Cars) seemed to be milling about - clearly they would be out of action for a while. 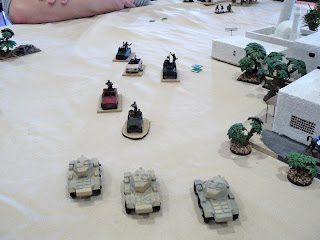 The Squadron commander gave the order to  advance; the tribesmen took up the challenge; and soon a brisk clash of vehicles developed in the desert southeast of Oasis Hakeem.  Helped by the PLFK Saladins' HEAT rounds coming in upon the Imperialist flank -  the Khandist Separatists having rallied betimes -  the tribesmen soon got the upper hand.﻿

Before long the desert was littered with burning vehicles, but most of those were the Imperialist ARVs.  Defeated, more than two-thirds of the Squadron lying in wrecks across the desert, the scant remnants fell back to the east end of the town.

The Diesela Khann tribesmen were reluctant to follow.  A good quarter of their own vehicles were no better than scrap metal, they had lost most of the limited anti-armour capability they began with, and they had received good reason to apprehend a team of TOW weapons at large in the eastern suburbs.  They would stay for now right where they were...

Meanwhile, the Diesela Khann's Heavy Group, after their initial success against the Relief Column ARVs (see previous postings), had come under fire from the lorry drawn RCLs.   The ARV Squadron had moved forward under the lee of a projecting part of the town, discovering as they did so the Relief Column's RCLs deployed and ready.  In a trice, the Heavy Technicals had lost most of their vehicles.  The survivors fell back to the Village of the Unbelievers, and there set about restoring order to the few survivors.

Out in the desert the Mullah had sent his team of mortars, together with a band of porters carrying extra ammunition.  This group was to prove of minor nuisance value throughout the day.
The action in the town had by this time sputtered out into a lull.  To begin with, the firefight between the Desert riders, assisted by the Garrison's 1st Platoon against the Mullah's Faithful had ended with some success for the Loyalists.  But the advent of the PLFK swung the fight in favour of the Insurrectionists.  The tribesmen drew back further into the middle of the town, some even emerging out the north side, and the Garrison Platoon fell back, badly hurt. 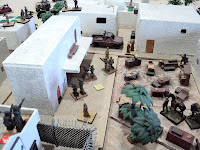 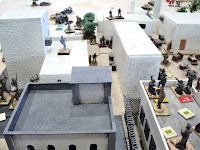 Second Platoon replaced the 1st, but it, too, found the going tough, and soon rejoined the Garrison Company at the Military Government compound.
Colonel Mustafa Mustash was reluctant yet to commit his 3rd Platoon.  Although his hitherto piecemeal commitment went rather against his instincts, he realised that he had to support his allies whilst at the same time maintain a secure hold upon the compound buildings.﻿
As his regulars and militia continued their advance through the bazaar and the western residential areas a lull also developed in the surrounding desert after the defeat of Mustafa's ARVs.  They remained nevertheless a force in being, however weakened.  But now a new element entered the arena.  The Relief Column's ARVs were now sweeping from the west side into the open spaces south of the town.

The PLFK Saladin Company, still rallying a kilometre to the southeast, soon saw in the distant haze west of them the approaching clouds that heralded a fast-moving force.   The Diesela Khann Light Group, looking back, also saw them.  Disorganised by their earlier victory, and reluctant to commit themselves to further action for the moment, they hoped that maybe - just maybe -  the Imperial ARVs would pass them by...﻿
To be continued...

Posted by Archduke Piccolo at 10:43 PM