As the recon light tank erupted in flames, the commanders of the mediums frantically searched out whence the deadly shot had come.  It soon became clear that the range had to be closed for an effective shot by the Mark IIIs, but the Mark IV dropped at once into action.  The first exchange of fire was 'honours even': both missed.  But soon enough the three Mark IIIs were ready.  At four to one odds, even with the partial protection of the stone wall (which I tended to think of as offereing a partial concealment rather than protection against solid AP shot), the Crusader might have been better advised to have bugged out when he could.


True, a Mark III suddenly clanked to a stop, smoke billowing from its hatches.  But a 5cm solid shot punched through the Crusader's turret armour, and ended the fight.


The executive decision to which I alluded rather abruptly before ending the last posting was this.  About to adjudicate the response of the Gran Bolivarian infantry observing the approach of the Orotinian armoured infantry and tanks, I saw two aspects of the rules that reminded me why the Quarrie WW2 battlefield was such a hostile environment for miniature infantry.  First was that the range: long range being 900 meters - 900mm in the Airfix rule set. 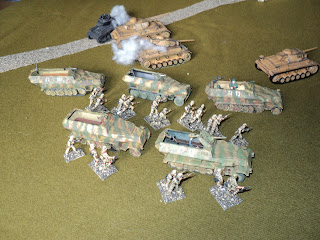 The second was that rifles had a rate of fire of 4 shots per 30-second turn; and machine guns could claim a target of anyone within an unspecified arc.   This seemed to me far too punitive.  Right there I let the ranges stand, but reduced the rifles to one aimed shot per turn, and machine guns to 3 shots (SMG), 4 (LMG and vehicle MG) and 6 (MMG).  Even that was bad enough... 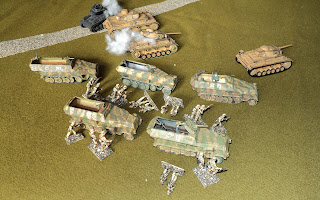 As the leading sections dismounted, the incoming laid low four from #1 and two from #2 Sections - a third of the 18 men dismounting. 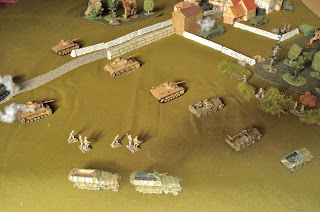 At just under 600 meters range, it would be a long time before these lads could get close enough to shoot back - that is, to within 100 meters.

As the rest of the platoon pressed on, accompanied by the armour, it became clear that the planned 'suppressive' fire wasn't going to work.  Under the spotting rules, anyone in cover could be spotted only at very short ranges - 100mm on the table.  There were no rules that allowed speculative fire into cover from which enemy fire was emerging, or might be expected.   A firing unit became easier to acquire, yes, but only within the standard spotting range.  There was absolutely no chance of the leading Sections (#1 and #2) getting close enough to make a difference, and indeed, half their remaining dozen men were cut down as they struggled forward.
Once within range at which they could engage the Gran Bolivarians, #3 and #4 sections dismounted, and pushed forward into a hail of fire.  Half a dozen were at once bowled over by the defenders in the brush;
and when part of #4 Section strayed to the right, three more were cut down by a hidden Vickers gun.

But these Orotinians were now in a position to fight back.  Spotting their assailants, #3 and #4 Sections gave back everything they had.

Not especially accurate, their shooting was deadly enough.   Brutal as the exchange had been, and the Gran Bolivarians had got slightly the better of it thanks to the Vickers MG, as the clatter and bang of the firing died away, there was nothing left of the Gran Bolivarian infantry section that had borne the brunt of the attack.  The Orotinians could now advance into the town...

To be continued...
Posted by Archduke Piccolo at 7:48 PM