Having cleared out the leading enemy infantry from the fringe of brush flanking San Angelo, the Orotinians pressed on.  As the infantry swept through the brush, the Mark IV and one of the Mark III tanks eased up to the stone wall behind which the sole Crusader tank so far encountered was smouldering gently. 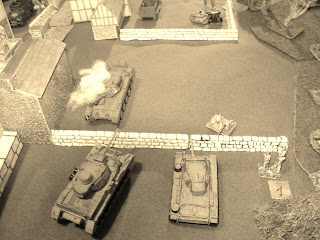 At once the armour came under fire from a 6pr anti-tank gun a short distance beyond.  At the same time, a Boys Anti-tank rifle team, finding itself too distant for an effective shot, tried sneaking along behind the stone wall to close the range.


Both sides had a measure of luck, here.  The 6pr gun's shot simply went wide, and the Boys team, spotted by the Mark III commander, escaped the quick burst from the tank's co-axial machine gun.  But their position was becoming precarious, as the Orotinian infantry rapidly approached. 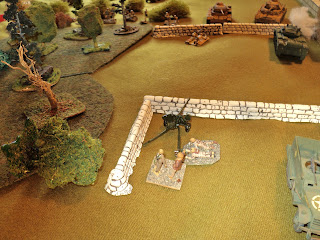 ﻿﻿ Just as the Orotinian infantry burst out of the brush, the AT Rifle team squeezed off a shot at the Mark III.  A complete miss!  A sad fate for what had been a suicidal attempt: under a hail of small arms fire, the anti-tank rigle team were eliminated.
﻿

The 6-pounder's first shot drew attention at once to to both AFVs, which returned fire with high explosive and machinegun fire.  With men dropping all around, the gun fired back with a will, switching its fire to target the more dangerous-seeming Mark IV.  It was a fortunate as well as fortuitous choice.  The solid shot penetrated the gun mantlet beside the main gun, putting the vehicle out of action.

The Orotinian commander was now in something of a quandary.  Could he continue the attack?  Down to two tanks, one of those on the other side of the road guarding against a possible counter-attacck from that direction, his infantry was as much depleted.  As the latter swept across field towards the anti-tank gun, its remaining crew having been wiped out by the panzers' HE, he ordered the left flank Mark III to check out the situation in its part of the field.
Disaster!  In a village back yard, the defenders' second 6-pounder gun was waiting just such an opportunity.  Early in the action, it had had a go at the tank through the gap between the village and the tract of forst to their front.  Unsuccessful, the crew had waited patiently, half expecting the enemy to emerge around the other end.  The gun's first shot settled the matter before the tank crew could see whence the threat would come.
At once the Orotinian commander yielded the palm to the defenders.  Having one tank left of the five with which he began, and just 19 men remaining of his 40-strong platoon, it was clear to him that further progress could not be achieved if he were to retain sufficient strength to resist a likely counterattack.  It was unlikely he could succeeed at all!
The Gran Bolivarian losses, though severe enough, were light compared with their opponents: some 13 men - 7 from #2 Section, 2 anti-tank riflemen, and the 4 6pr gun crew - plus a Crusader tank.  The situation was clear: the attack had been defeated, San Angelo was safe.

Overall, the Airfix rule set offers a framework for a brisk and enjoyable game.  But I do believe a deal of work needs to be done to make it really playable, especially if infantry are to have a role on the table-top...
Posted by Archduke Piccolo at 7:03 PM