About a week ago, Paul 'Jacko' Jackson and I got together one evening to fight out a scenario based on something I had seen associated with the Rommel group. This was the attempted relief of Tarnopol, to rescue remnants of several German units trapped in the town, and cut off several kilometres behind the rather fluid Russian front line.
This line was held by 15th Rifle Corps: two infantry Divisions, 9th and 366th. They were to be deployed in defensive positions, somewhat dug in, east of (i.e. above) the red line (inclusive) according to the above map. They comprised:

These formations were permitted 10 hexes worth of defensive works, which were the eight earthworks and two barbed wire entanglements shown in the maps. 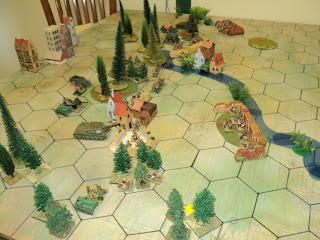 The German start line was west of the map, 'below' the blue-grey line, exclusive. They will have carried out their relief mission if they successfully carried and held four of the five objective points marked by the white stars. Two of these, the Russian commander declined to hold in strength.
To carry out his relief mission, the German Corps commander was given a battlegroup of Fourth Panzer Army, comprising 8th Panzer and 9th 'Hohenstaufen' SS Panzer Divisions, with self-propelled artillery support, and a unit of Nebelwerfer rockets.

Notes:
1.  The 6-stand Russian infantry units represented regiments, and were given 6 strength points.
2.  The 4-stand German infantry units represented battalions, and were given 4 strength points, except when mounted in armoured halftracks, for which they were upgraded to 5SPs.
3.  The original Rommel scenario gave the PzIVs and StuGs to the SS Division, and the Tigers etc to the Wehrmacht.  As that seemed to me unhistorical, I switched them, though I admit I could be quite mistaken in this matter.
4.  The PzIIIN was my own addition to the Axis formation.
5.  The unit to which I assigned Jagdpanthers, was allocated in the Rommel scenario 'heavy tank hunters'.  It is likely that what was intended was anything from Nashorns, towed 8.8cm FlaK guns, or even Ferdinands. Jagdpanthers had not long entered service by April 1944, but I figured their presence just plausible.
6.  The Nebelwerfer and Katyusha rocket launchers were treated as mortars for range, were capable of firing only on alternate turns, but rolling double the dice.
7.  For this action I used SP to determine the number of combat dice rolled. In effect we used a kind of hybrid Portable Wargames/ Hexblitz game system. As a result, the action rattled along fairly crisply.
8. The Soviet Tank Corps arrived on the table edge on move 2, as called for in the original scenario. Upon reconsideration, it might have been better to have randomised the arrival time, say to a roll, from Turn 2 onwards, of a D6, with a '6' being rolled to arrive.
9.  The original scenario placed the Soviet HQ in the table edge town. Instead, I took the place to be Tarnopol, and placed a couple of German infantry stands therein to represent the garrison to be rescued.  They were not otherwise involved in the action; the Russians were not allowed to enter the precincts.
10.  In armoured duels, anti-tank shooting at 'heavier' graded armour subtracted 1 from the 'to hit' dice. In the duel between a T34/76 (3SP; Med Armour, Med AT) against a Jagdpanther (5SP; Heavy Armour, Heavy AT), the Russian would roll 3 x D6 looking for 6s; the German 5 x D6 looking for 5s and 6s.  The outlook for the T34 would be pretty bleak!

The narrative will be brief. The Axis advanced with the 8th Panzer on the right and 9th SS Panzer on the left.  The Soviet 25th Regiment, exposed on its high ground ahead of the main position, came in for a heavy bombardment from Axis ordnance. Although they repulsed an early infantry attack, it was plain the regiment could not remain there long, Reduced to half strength, they pulled back, under continual pressure, until they reached the barbed wire. Unable to negotiate this obstacle betimes, 25th Regiment succumbed to a final barrage, to be stricken from the 9th Rifle Division's order of battle. 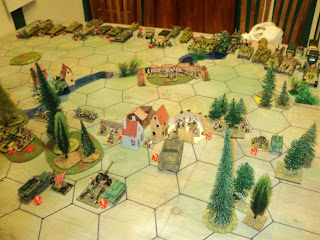 On the other flank, 1098th Rifle Regiment also found the pressure from German infantry and armour too much to hold their fortified position. Back they went, into the marshlands to their rear. German panzergrenadiers followed them therein, but soon left again to await developments from the approaching armoured battle.

During all this time, the Soviet artillery was subjecting especially the German infantry to a steady and effective gunfire from field and assault artillery. This considerably slowed the Axis advance. All the same, 26th Rifle Regiment was driven out of its partly fortified, partly forested position, well to the rear 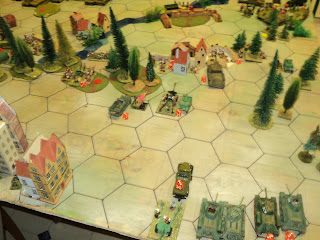 By this time, 9th Tank Corps had entered the battlefield, the lighter T34s plus field artillery on the northern flank, the heavier T34s, Katyusha and SMG unit on the southern. 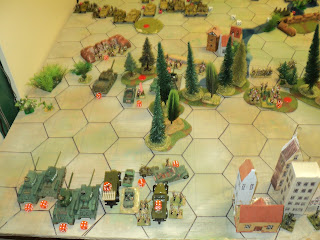 When 26th Rifles were driven out of their position, two companies of T34/76s swept around the flanking woods to engage the German Jagdpanthers. This more or less went as might have been expected. I don't recall they hurt the German armour - possibly one platoon fell back, but the Russian tanks took 4 hits. Only one was damaging, though; the rest were treated as 'retreats', and back went the target company 3 hexes; the other went back later, during the Soviet turn. Thenceforth, German activity was limited to attempting to pound the soviet defence lines on the northern flank. Panthers drove the anti-tank unit out of the riverside village, but couldn't make up their minds to cross the stream to test the Soviet hill defences beyond. Meanwhile one T34 company had taken up position in the fortifications formerly occupied by half of 26th Rifle Regiment. 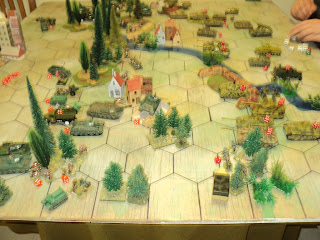 There was more action in the south. The defile between the forests and the marshlands wide enough to accommodate but two tank companies side by side, tended to limit the weight of the Soviet counter-attacks there. All the same, they did knock out one PzIV platoon, and damaged several StuGs as well. For their part, the German armour gave almost as good as it took, wiping out the lead T34/85 company. 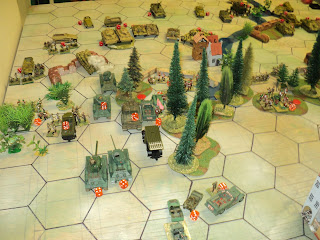 By this time, a count indicated, to my surprise, that the Germans had reached their exhaustion point; the Soviets were still well short of theirs. It was the Soviet artillery that had done the damage, and that damage had been done to the German infantry.

As played, this was not a well balanced scenario. The odds are simply too stacked against the Germans, especially played in this format. Historically, both sides fought each other to a standstill. Only some 9 men of the Tarnopol garrison ever reached their comrades to the west.

Were I to do it again, I would make the Soviet rifle infantry 'poor' partly to suggest many were barely trained conscripts, partly to indicate units that had already been through the mill. The Guards Tank Brigade would be average, but maybe the T34/85s I'd count as 'Elite'. The Germans I'd rate as 'Average' across the board, with maybe the Tiger I and its companion PzIIIN counting as 'Elite'. These 'Elite' designations I admit to being quite arbitrary.

Meanwhile, the First Blacklands (Balkans) War is awaiting its first battle, that the narrative may proceed.  I hope I can get that done shortly.
Posted by Archduke Piccolo at 8:29 PM