A half hour after their relatively inexpensive victory over the Garrison ARV Squadron, most of the Diesela Khan Light Group technicals and command vehicles were smouldering wrecks, great smudges of smoke  polluting the clear desert air.  What had happened? 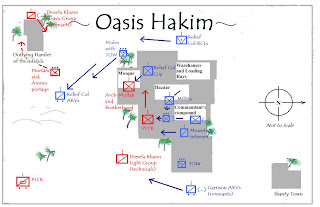 The map gives the answer (in the absence of clear pictures of the events).  As what remained of the Garrison ARVs fell back to deplore their losses, the Relief Column squadron, accompanied by the mule mounted TOW platoon sped into the gap between Hakeen itself and the Village of the Infidel.  Perhaps they were unwise to ignore the mortar platoon they bypassed, but the Squadron Commander's primary aim was to take out the PLFK Saladins if he could.
A brisk exchange of HEAT rounds ensued at long range, but the Imperialist had drawn the attention not only of the mortar platoon little more than 100 meters off, but the Light Group of technicals, and shortly afterwards, the Heavy Group as well, lurking about the small village.

Grimly enduring the incoming from all directions - Anti-tank, mortar HE, machine-gun and finally RCL - the ARVs fired off their HEAT rounds at the enemy Saladins.  The latter, having played their part in the earlier action against the Garrison Squadron, ran out of HEAT first, meanwhile losing some of their number.
Then it was the turn of the mortar and the technicals.  The light HE rounds remaining to the ARVs soon drove off the mortar platoon, its survivors making off into the Village of the Infidels; and the Diesela Light Group suffered the fate depicted in the leading picture.  The survivors of the Garrison ARV squadron returned to add what help they could to the fight.  As the Light Group began to burn, elements of the Heavy Technical Group sneaked into the ARV right rear, and let fly.  The Imperialists' luck held: the tribesmen's nervous shooting went wide, and the return fire sent them scurrying whence they came.

By this time, the situation within the town was reaching its climax.  The Imperialist troops had now occupied or cleared close to 80% of the place.  Just the Mosque and the southern edge of the CBD remained in insurrectionist possession.  The relief Column Infantry company were now setting up firing positions under the walls of the Mosque itself.  In the vicious short range shooting that ensued, both sides suffered heavy losses, but the Imperialists seemed to be getting the upper hand.

Then, with victory almost within his grasp, Col Mustafa made his crucial and disastrous error.  Anticipating for some time a push by the PLFK fighters towards his HQ compound, he ordered his citizens' militia to side-slip to their left in support of the loyalist desert tribesmen still lurking among the streets and alleys of the CBD.  This left a gap between the militia and Major Iqbal's regulars.

The insurrectionists took full advantage.  Instead of advancing in a northward direction, the PLFK fighters swung west, right onto the left flank of the Imperialist company.  Though giving a good account of themselves, and hanging on grimly for a quarter of an hour, the regulars found the odds  too great.

Taking heavy losses and overwhelmed by numbers, the scant survivors drew back from the Mosque.

The Commandant's effort to help the Relief company by advancing the militia and tribesmen, supported by his own 3rd Platoon, struck empty air (the 2" range rule for built up areas), nor was he prepared to commit them to action once the Relief Column Company had fallen back.

Recalling his troops, he began to set his mind about how he might yet retrieve the situation.

At this point, as if by mutual consent, the action (game) ended.  I was never quite sure whether the subsequent discussion between Brian and me was by way of a roleplay, debrief, or a claim (by him) for victory.  I knew I had fallen short, and had already a pretty good idea why (a certain rustiness with the rules contributed more to my style of play, but it was that tactical misjudgement at the end of the day that proved the turning point, I think), but to the Arch-Mullah's offer of safe passage provided the Imperial troops quit the town, I (and the Colonel) was disinclined to accept.  The situation was bad, and night fighting would have been a problem against the fanatical Brotherhood of the Faithful (that Morale 12 thing - the Regulars were rated at 9, which was pretty good, but 12 is near unstoppable).  All the same, I felt that the Colonel - as I chose to portray him - would stand to his duty.  At that, he still had something to fight with, and even had he lost the town, I now feel that he would have had enough in hand to own the surrounding desert...

At any rate, Brian rated the day's result as a draw, which seems to me about right.  One of the upshots of the day's action was the report sent in to the Harad Imperial Army Capital Headquarters suggesting a thorough recalibration of the sights for the main armament of the Saladin armoured cars.  Their shooting performance was dismal all day - both sides, which suggested to Colonel Mustafa Mustash the answer to the mystery whence the PLFK got their ARVs.

Overall, that was one of the most complicated and enjoyable games I've had in quite a while.  Great fun!
Posted by Archduke Piccolo at 6:51 PM