In recent times, I have noticed several blogs posting articles on refights of some of the more well-known actions from wargames literature.  The two favorites come to mind: 'Battle of Blasthof Bridge' and 'Horse and Musket action in the Plattville Valley'  (having lost or mislaid my copy of Don Featherstone's book, I don't properly recall the chapter title). 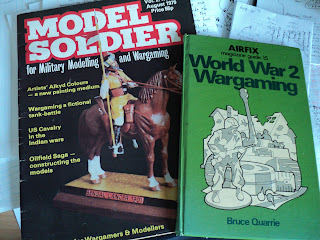 It was in the spirit of this kind of nostalgia that I resurrected a game based upon a report in an old Model Soldier Magazine under the above title.  That game used a set of rules that enjoyed a considerable popularity in this country in the 1970s - probably because they were the most accessible in terms of availability, but also to learn:  Bruce Quarrie's Aifix Magazine Guide 15: World War 2 Wargaming (1976). 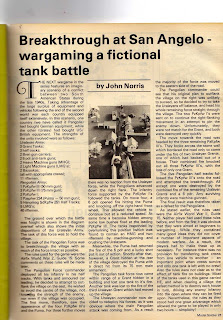 From the original game, I made some changes: one to the identity of the countries involved, another to the army lists, and a third to the terrain.  The action purported to be a border clash, the invading Orotinian (Pangolian) army seeking to force its way through or past the village of San Angelo, defended buy a hastily cobbled Gran Bolivarian (Uralayan) battle group.  Owing to differences between the original army list and what vehicles I had available, the composition of both sides I had to amend:
Gran Bolivarian (Uralayan) Army:
3 x Crusader III tanks (6pr guns armd)
2 x Bren gun carriers
2 x 6pr anti-tank guns
2 x Heavy machineguns (Vickers MMG)
2 x Light machinguns (Bren LMG)
2 x Anti-tank rifles (Boys ATR) - seemed to be more in keeping with the other equipment than did bazooka ATRL,
12 x infantry organised as 2 x SMG armed  Section commanders and 10 riflemen.
The infantry were organised into a weak platoon of 2 Sections comprising 1xSMG, 5 rifles, 1xLMG, 1xATR.  I added a small Platoon HQ comprising a pistol-armed CO, an SMG man and a couple of riflemen. 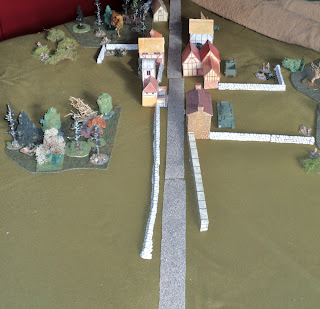 Finally, I thickened up the terrain a bit and gave it more definition.  This applied to the tracts of heavy wood and scrub dotted about the envorons of San Angelo village.  To the scasttered trees, I added dark, tree clad areas of thick bush; fringed here and there by brush represented by the moss.
As the Orotinian invaders spilled into the cleared farmland about San Angelo, they almost at once came under fire from the Crusader tank close by the house on the north end of the village.
Pushing forward up the road, the Orotinian light PzII tank did not last long before being put out of action.  Meanwhile, at slightly under 600 metres range, the two leading sections of infantry debussed.  At once they came under a deadly fire from the scrub edging the belt of jungle.
At once I saw that I would have to make my first of a series of 'executive decisions...'
Posted by Archduke Piccolo at 9:26 PM