Two days after the Turcowaz invasion of Chervenia was frustrated at Dimitrovgrad (see Battle of Dimitrovgrad), matters were to come to a head within the Turcowaz Imperium, near the border separating West Thrace from East Macedonia. Marching westward from East Thrace, after the victory over the Turcowaz Army two weeks before, General Radko Dimitriev, commanding Chervenia's IIIrd Army, discerned an opportunity to entrap the Turcowaz Fourth Army near Salonika, menaced as it was by the invading Hellenic Army.
However, Crown Prince Constantine, having received word that the Second Turcowaz Army was marching south from North Macedonia to sever his lines of communication, hastily abandoned all thought of annihilating the Fourth Turcowaz Army from front and rear, and decamped betimes into South Macedonia, heading for home. Thus freed, the commander of Fourth Turcowaz Army, Halepli Zeki Pasha, also turned about, to meet the Chervenian invaders.
Such a move might have placed the IIIrd Chevenian Army in serious strategic danger, as the Third Turcowaz Army, though still some distance off in East Thrace, had rendered problematic any retreat through that province, and there was - or had been - a Turcowaz presence in South Chervenia. The trapper trapped?  The possibility was enticing to the Turcowaz, at least. For General Dimitriev, not so much, but he refused to leave the Settee Empire without a fight. Finding a good defensive position at 'Abstrati, he resolved to offer battle there.  True, the best place to defend was in front of the river line, but apart from the road and rail bridges, there were a number of fords to be discovered along its length, one of them conveniently behind some wooded country he proposed to occupy.

For his part, Halepli Zeki Pasha might have declined to attack the position, and wait out the enemy. His army was no stronger than his advarsaries. Yet despite the setback in South Chervenia, there was much to be gained from a decisive victory right here, could it be obtained. Although the Chervenians possessed machine guns, his own two-to-one superiority in artillery might make a big difference. He resolved to chance his army in attack.
In the following action, the respective armies were indeed equal - 36,000 strong (36 Strength Points) but with certain differences in composition and quality.

The battle narrative need not detain us long. The weight of the Turcowaz artillery quickly silenced the Chervenian guns altogether, and switching to the town wherein lay the machine guns, belike would have served them out in the same manner. The MG battalion hastily evacuated the place, leaving half their guns behind, the garrison duties being undertaken by the Royal Guards.

In retrospect, Halepli Zeki Pasha accepted that his battle plan might have been over-ambitious. His battle front split by a ridge, nearby woods and olive groves, he thought to find a ford over the stream and then attempt with his cavalry to roll up the enemy southern flank. Although the cavalry did indeed find a ford, and even effected a crossing, they proved unable to progress further, once General Dimitriev committed one of his reserve infantry units. Meanwhile, the two Chervenian units, 15th and 21st, enjoying the cover of the woods, easily stood off the enemy infantry in front of them, Late in the action, 21st Infantry even essayed a counterattack if its own - with about as little success as enjoyed by their adversaries.
With the silencing of the Chervenian artillery, the Turcowaz infantry on the northern wing began their advance. The probing Chervenian cavalry, though successfully driving 22nd Infantry from the hill that unit had seized, soon found themselves in trouble. Held in front, they were assailed in flank by 20th Infantry, with the 21st coming up in support.
The Chervenian were very lucky to escape with trivial loss, fleeing well to the rear, beyond the hill flanking 'Abstrati village.
Gradually, the Turcowaz infantry pushed forward edging back the opposing forces. Accurate gunfire caused the Royal Guardsmen to abandon the village (see the picture below: 2 sixes. Unfortunately for the Turcowaz, they resulted in a 6 and 4 for effect; 2 retreats.  The garrison fell back to the rail bridge.
The advancing infantry seemed to be clearing the nearby hills as well, shooting the enemy infantry from them. The whole action was looking very encouraging for the Turcowaz in this sector of the field.
But such successes were not coming for free. Scarcely noticing their own losses in the seeming unstoppability of their advance, the leading units - 19th and 20th Infantry - even reached the outskirts of the village before the whole attack simply ran out of steam. The accumulated losses suddenly began to be felt, and no further progress was possible. The action in the south had stalled almost at once - nothing could be expected from there. 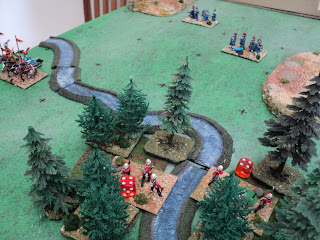 The Turcowaz Army had (rather unexpectedly) reached its exhaustion point, the battle half won - and totally lost. [At this point I decided upon a count, expecting both sides to be short of but getting close to their exhaustion points. My impressions had been quite wrong on both counts. The Turcowaz had just reached their e.p. {12SP lost}; but Chervenian losses were only half that - 6SP only. I can account for that only by the large majority of effects dice against Chervenia turning out to be 'retreats', which the defenders were quite 'willing' to take {or I was in their behalf}. I think my policy would have been similar on the Turcowaz side, but most of the effects dice for them turned out to be 'kills'.] Nevertheless, Halepli Zeki Pasha was determined he was not ready to concede the field - not yet.

The tide of Turcowaz infantry on the ebb, the Chervenians rather tentatively followed up. The return fire promptly knocked over a strength point.  That was enough for General Dimitriev. At once he called off the counter-attack, recalled his troops back to their starting positions, and awaited the nightfall.
This was an undoubted victory for the Allies - their first really clear cut and unqualified success so far in the War. The Chervenian Army was now free to take their own route north, with only the remotest likelihood of molestation upon their journey home. Halepli Zeki Pasha's battered Army would have to retreat into Salonika to patch over its wounds and recover some of its strength. At the cost of 3500 casualties (and several destroyed guns) the Chervenians had inflicted 6000 upon the Turcowaz.
For all that, it was something of a negative success - a defensive victory that secured a fairly safe retreat back to their own lands. There was no question of IIIrd Chervenian Army facing the resurgent and considerably stronger Turcowaz Third Army.  The invasion had for the time being to be called off - or at least the plan revised.
Meanwhile, far to the west, at a convergence of roads at a place called Kozani in Southern Macedonia, Second Turcowaz Army, marching southwards from the northern province, attempted to intercept the Hellenic Army, hurrying west before turning south into Thessaly. The narrative of that encounter can wait until next time.
To be continued.

Posted by Archduke Piccolo at 3:57 PM