In the last posting I spoke of the campaign of Ursus XII, Prince of Ursaminor, deep within the Grand Duchy of M'yasma. The scene was set for the climactic battle when the M'yasman relieving army came up and interrupted the Ursaminorese siege of the small fortified town of Potsalava.

Here is a rough sketch map, taken from the folio of Col. Eirik Yxkull, Topographical Engineer with Ursus XII, shortly after the battle: 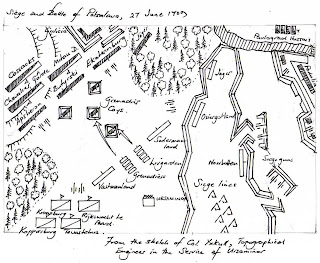 Orders of Battle were:

Being the sort of military obsessive he was, Ursus had kept his infantry trained to the highest pitch of efficiency. So all foot units are treated as grenadiers for shooting, but only the grenadiers are so treated for morale.

I hope in the near future to have a pictorial account of this history-making and empire-shaking battle...
Posted by Archduke Piccolo at 3:58 PM