The 'logical campaign is herewith set in the context of a broader campaign: that of May 1813. Marshal Dubonnet has been given a small Corps d'Armee, the XIV, and is operating some distance off the left flank of Napoleon's main force that is about to cross the Saale river near Leipzig. A few days into the campaign, and already the Berlin Press is expressing its worry over the likely outcome of the war.

BERLIN BLATTER 1 May 1813, Gross-huntersdorf.-
'The much anticipated and apprehended advance of the Ogre's hosts of Midian has begun in earnest, and already the first clashes of arms have taken place as the month of April draws to a close. The main body of the French armies, under command of the Emperor himself, has forced the passage of the Saale River at Merseburg and nearby places, and bid fair to capture Leipzig very shortly.

In the meantime, the redoubtable Marshal Davout, together with the famous cavalry leader, Sebastiani de la Porte, is operating to our disadvantage in the Lower Elbe region about Hamburg. 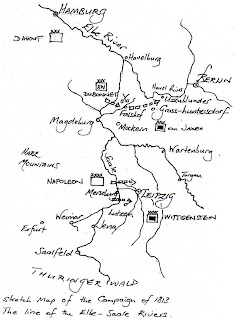 As it were linking the two widely separated forces, and possibly the greatest menace of them all, is the XIV Corps of Dubonnet - the youngest and newest of Napoleon's Marshals - having won a battle and presently advancing rapidly. Upon the 28th April, this Corps successfully forced the line of the Falsover River, northeast of Magdeburg, despite the spirited resistance of the Allied troops sent to prevent such a crossing. Since then, Dubonnet has swung his force eastwards and seems to be on the march straight for Berlin itself. The burghers of Magdeburg and Mockern might heave a sigh of relief at their towns being so bypassed, but should Berlin fall, the rest of Germany must follow.

Already thus early in the campaign, grave questions are being raised concerning von Jaxen's capacity for command. Are we to apprehend the general collapse that ended the 1806 campaign so ignominiously for Prussia? Ought von Jaxen to have held the line of the Falsover, or even the Elbe itself around Magdeburg?

Many correspondents may think so, but must before passing judgement consider the following. It is a fact that General von Jaxen was specifically chosen for this command by the Chief of Staff, Graf Gneisenau himself, an appointment warmly endorsed by no less a personage than Marshal the Prinz von Blucher. General von Jaxen has in the past proved time and again his capacity for semi-independent command: it seems hardly probable that at the crisis of his country's need he should suddenly fail.

However, it is true that he was wanting one of his regiments at Falshof. Whether this was due to lateness in arriving in the theatre, to the unit being engaged in some other important task, or to simple incapacity, we have been unable to determine.

Perhaps more disturbing for local observers is that for reasons no one can discover, Genl. von Jaxen's Corps seems to be diverging from the natural line of retreat towards Berlin. In blunt fashion, Dubonnet has been advancing on the most direct route along the line of the Havel River. The village folk have just about left Uszublunder deserted in the face of the enemy, complaining of having seen hardly a single Allied musketeer or trooper in the last few days. The divergent course of von Jaxen's corps somewhat to the south of Gross-huntersdorf begs the question: What is he about?

Perhaps his priority is to protect the northern flank of the Allied main army, now gathered about Leipzig under the command of General Wittgenstein. Alternatively, given the superiority of Dubonnet's force, has von Jaxen in mind to place his corps on the flank of Dubonnet's line of advance, thereby preventing his farther progress? This is a sword with two edges, particularly in the light of known French capacity to 'live off the land', that is to discover and steal provender from whence it might be found.

No doubt the next few days will reveal the intent of the good General, but we have reason to tremble for the fate of Germany. Less well known than many of Napoleon's other marshals, Dubonnet's ability is as yet an unknown quantity. His success at Falshof might be fluke or flair, but the very fact of his appointment to the Marshalate argues a capacity above the normal. General von Jaxen will no doubt find him a formidable opponent. Perhaps therein lies an explanation for von Jaxen's conduct of operations in the last few days; taking care to choose carefully his moment to strike.'
Posted by Archduke Piccolo at 1:08 PM